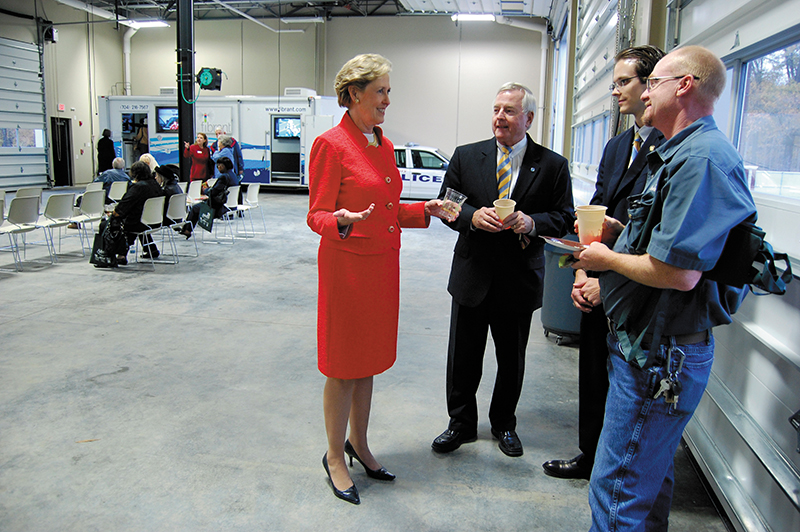 Editor’s note: This article is the first in a series examining the creation, operation, impact and future of Salisbury’s fiber optic network, Fibrant. See the entire series here.

SALISBURY — After mill closings across the area led to steep job losses, Salisbury City Council developed an idea meant to stem the tide and, perhaps, reverse the troubling trend.

Cone Mills closed in 1999, and more than 600 people lost jobs. The denim plant had been the city’s largest water customer. Color-tex in Spencer closed without warning in 2000, leading to about 300 lost jobs. Pillowtex’s demise ranked as the most devastating mill closure. The massive manufacturing complex that led to the creation of Kannapolis shuttered in 2003, resulting in thousands of job losses.

Salisbury’s venture into  “fiber to the home,” as it was known at the time, was intended to be a remedy to the closures.

Now known as Fibrant, the service aimed to bring jobs to the city and attract workers from the N.C. Research Campus to Salisbury. An early business model put together by the consulting firm Uptown Services showed the service becoming profitable within five years.

During a 2009 candidate forum, then-Mayor Susan Kluttz said Fibrant would make Salisbury a technology leader in the nation. Councilman Pete Kennedy said Fibrant could lead to a reduction in the local tax rate.

Now, customers say the fiber optic network works well and that Fibrant comes with good customer service, but many of those council members’ goals have not come to fruition, at least not at the scale initially dreamed.

Instead, Fibrant has strained city finances, resulted in relatively little in terms of luring new industry to town and indirectly led to property tax increases, according to a review of documents and interviews by the Salisbury Post.

At one point, city staff spread Fibrant expenses over city government in a manner that made the service — operating at a multi-million-dollar loss, with debt included — appear minimally profitable on paper, though the stated reason was to eliminate duplicate expenses.

Hindsight is 20/20, said former Mayor Paul Woodson, who served on the council from Fibrant’s inception until 2015. Woodson and the four other members of that council — Bill Burgin, Mark Lewis, Kennedy and Kluttz — came together earlier this month for a joint interview with the Post.

The former council members said Fibrant hasn’t been perfectly managed, but they didn’t regret the decision. With major job losses and the city’s record of success with earlier projects, the council had to do something, according to Woodson and the four other council members who conceived Fibrant.

“You know what was happening in Salisbury at the time; everything was closing. The mills were closing. The furniture places were closing,” Woodson said. “We’re trying to figure out what we are going to do, make us a little better.”

Former Councilman Mark Lewis, a banker, recalls being asked at the time, “What are you going to do to bring jobs to this city?” In 2006, Lewis referred to Fibrant as a “city-changing event.”

‘I never heard anything but positive’

In the mid-2000s, municipal broadband was a hot, new idea, Kluttz said. Wilson in eastern North Carolina had already launched its own broadband network and had seen success, she said. Salisbury was coming off its own success with a number of local initiatives, too, she said.

“When this idea (Fibrant) came up, it just seemed natural that we could do it,” Kluttz said. “We were the right size and we were looking for something, and it seemed to be the right thing.”

Lewis recalls Fibrant first being seriously mentioned as a worthwhile project during a council planning retreat in 2005. It was assigned to a committee for further study. Kennedy and Lewis led the committee’s work. Council members traveled to Wilson to examine its fiber optic network — Greenlight — studied the idea for about two years and organized focus groups of residents from across Salisbury.

“I never heard anything but positive like, ‘Gosh, this sounds like a great idea,’ and, ‘You sound like the city that can do it,’ and, ‘Let’s go for it’ and, ‘Sounds wonderful,'” Kluttz said.

The Salisbury City Council initially hoped to do more than bury fiber optic lines underneath Salisbury. Council members planned to extend the service outside the city limits, too.

Though jobs ranked as the major reason for Fibrant’s creation, there were other factors, too. Woodson said internet in Salisbury at the time was “terribly slow,” and he often spent a long time simply waiting for a page to load.

“If you have a question about your bill, call City Hall,” Kluttz recalled the bill saying. “So, they’re answering calls at City Hall and saying ‘Why are they calling us?’ But we had a lot of complaints that Time Warner Cable had a monopoly, and why did they allow this?”

Part of the reason for setting up Fibrant was to increase competition, she said.

Stood the test of an election

Bryan Wymbs was in the “for it” column from the start. Fibrant could do many things for the community’s business, medical and education fields, Wymbs said.

A resident of Mitchell Avenue, Wymbs was also the only speaker during a March 2008 public hearing about borrowing $30 million to pay for Fibrant. The city took on the debt in two bond issues that helped pay for fiber optic lines to be placed in the ground and the construction of an operation center on Martin Luther King Jr. Avenue.

In advance of the public hearing, a city study listed the following benefits of the fiber optic network: helping local business compete better in the global economy, enhancing quality of life and attracting a creative class of young professionals.

“It kind of stood the test of the public, and if the public had decided this is not the way we wanted to go, we would have been put out,” Burgin said. “Instead, all five of us made it back in.”

“That’s not a bad policy decision. After that, it becomes a little bit fuzzier,” he said.

That, too, was part of the plan, former council members said.

“I’ve thought about that decision many times,” Burgin said. “The truth of the matter was that one of things we were trying to do was provide the service to every economic level of the city.”

“The entire city,” Woodson chimed in. “Nobody left out.”

Burgin said there may be questions about whether the former council’s choice was the right one, but there was purpose behind the decision. A private provider would have cherry-picked neighborhoods that would be more profitable, council members said.

“I think everybody was right in recognizing that this was critical infrastructure for the future, period,” Lewis said. “We recognized that, if we wanted to stay cutting edge like we felt that we were, and were providing good economic development, that we needed to make sure that we had this infrastructure. And we were basically told that the private sector was not going to bring it to a Salisbury before they were going to bring it to a Charlotte or a Wilmington or a Raleigh.”

The city launched Fibrant in 2011, and officials hoped to secure 4,800 total subscribers by 2015 — a mark that still hasn’t been achieved.

“Turned on its head”

Just as the Salisbury City Council prepared to launch its Fiber to the Home project, an unanticipated development disrupted any notions of rapid success — the Great Recession.

Earlier, when Salisbury City Council members started debating the launch of Fibrant, the unemployment rate was in the single digits — just 6 percent in 2005.

By 2011, the city’s unemployment rate had spiked to 21.5 percent. The poverty rate also topped 20 percent.

Salisbury’s median household income was $40,427 in 2009, and it still hasn’t recovered from the recession.

Former Salisbury City Manager Doug Paris said Fibrant, effectively, couldn’t be sold to 37 percent of the households within the city limits shortly after the recession. The 37 percent number cited by Paris is a combination of vacant homes added to the poverty rate in 2015.

Former City Manager David Treme, Paris’ predecessor, said he’s wondered if there was a way for city council members to have predicted the recession.

“Whatever business plan that we may have had at that time was turned on its head,” Treme said. “In other words, the assumptions that we were using for the business plan, in my opinion, were no longer in play.”

The recession, however, wasn’t the only change that affected Fibrant’s fate.

The Republican-controlled N.C. General Assembly also meddled in matters. Time Warner Cable successfully lobbied for legislation known as the “level playing field” bill. It limited the ability for Fibrant to freely expand outside of Salisbury’s city limits — a goal council members initially envisioned. Salisbury couldn’t expand its customer base beyond the city. Instead, it needed to work with the customers in the city limits, and former and current city officials say Salisbury suffered as a result.

In addition to predicting a profit within several years, the city’s business plan — prepared by Uptown Services LLC — also showed revenue from TV services increasing at an uninterrupted and steady rate. The “cord-cutting” phenomenon altered that assumption. Increasingly, people no longer routinely subscribe to cable or satellite TV service.

The popularity of smartphones affected predictions for revenue from landline phone service.

By the time revenue started to fall short of expectations, it was too late. Salisbury had already taken on more than $30 million in debt and the fiber was already in the ground.

Coming Tuesday: How actions by city staff obscured Fibrant’s finances and how the financial picture changed following the recession.