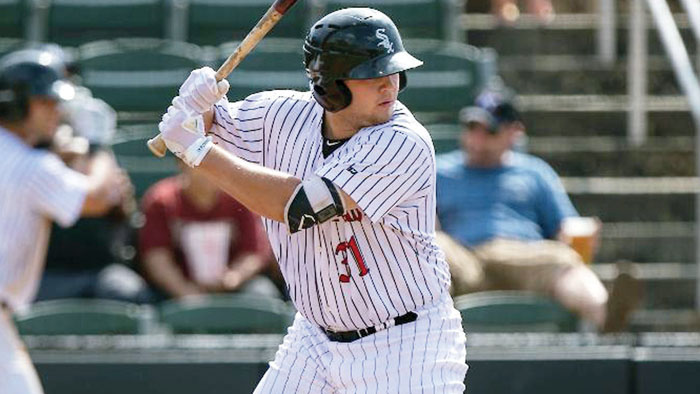 KANNAPOLIS — Fans of the Kannapolis Intimidators should get to know first-round draft pick Jake Burger while they can.

The hard-hitting third-baseman is already slugging his way through the White Sox minor league system.

“It’s been awesome so far,” crowed the the 21-year old Burger, promoted to Kannapolis July 7 after a brief stay in the Arizona Rookie League. “I’m excited to be here, excited to be in the White Sox organization. I grew up as a White Sox fan, a Paul Konerko fan. Anytime you can play for the team you rooted for as a kid, it’s always good thing.”

It’s been even better for the Intimidators, who won the South Atlantic League’s Northern Division first-half championship and secured a post-season playoff berth. Burger — the 11th player selected in June’s amateur draft — has not disappointed, batting a robust .405 in his first 11 games in K-town.

“He’s everything everybody said he would be,” hitting coach Jamie Dismuke said prior to a recent home game. “He drives the ball to all fields. He’s selective at the plate. He’s fit right in with the rest of the guys. You’d never know he’s a first-rounder.”

That’s because Burger —  a 6-foot-2, 210-pounder who’s been compared to the Cubs’ Kyle Schwarber — is an amiable sort. He’s a happy-go-lucky kid who grew up with mid-American, blue-collar values. Raised in a St. Louis suburb, his father was an Indiana farmer who later sold insurance to retired Phillies’ infielder Ryan Howard — who gently steered the youngster to Missouri State University.

“I’ve talked to (Howard) on the phone a few times and met him in person,” Burger said. “Great dude. We went to the same college and he gave a lot of advice. Ultimately, he was the deciding factor why I decided to go to Missouri State. He kind of led me in the right direction.”

Burger wasted little time turning heads in Springfield. Two years ago he collected a team-best 78 hits as a freshman. Last season he hit .349 with 21 home runs, 72 RBIs and nearly won the Missouri Valley Conference triple-crown. This year he was impossible to ignore, batting .328 with 22 home runs and 65 RBIs in 63 games and earning first-team All-American honors. He struck out only 38 times in 247 plate appearances.

“Jake is a tremendous and unique talent,” said Intimidators’ outfielder Luis Gonzalez, Burger’s teammate on the 2016 Collegiate National Team. “His bat speed is unbelievable and the way he backspins balls to all fields with power makes him a dominant hitter.”

Drafted on June 12, Burger signed for $3.7 million nine days later and arrived in Kannapolis on July 7. In his debut he went 3-for-3 with a double in a home win against Hagerstown. On July 10 he was 3-for-4, crunched his first professional homer — a 407-foot blast to center field against SAL All-Star McKenzie Mills — and knocked in four runs.

“I just felt comfortable right away,” he said. “The pitching here is pretty similar to what I saw in college. Nothing’s too fast for me yet, even though that home run was a good pitcher’s pitch.”

The “Hot Now” sign officially came on for Burger on July 20, when he went 5-for-5 with a triple, two doubles and two RBIs against visiting West Virginia.

“There are no words for that,” he said with a smile. “I’d never had a five-hit game in my life. It was just one of those nights where the ball looked like a beach ball. Everything I swung at, the barrel caught the ball.”

Perhaps his roommate, first-round pick Gavin Sheets, said it best when he crowed, “Jake Burger can hit. I think you’re going to see him move through this organization.”

Of course, that’s up to the White Sox and how they assess Burger’s development. For now, he’s someone everyone is watching.

“So far he’s hitting .400,” said Dismuke. “If he has a weakness, nobody’s discovered it. There’s no doubt if he continues doing what he’s been doing, he’s got a shot. The sky’s the limit.”

Hot links: Four move on to semifinal in Horace…