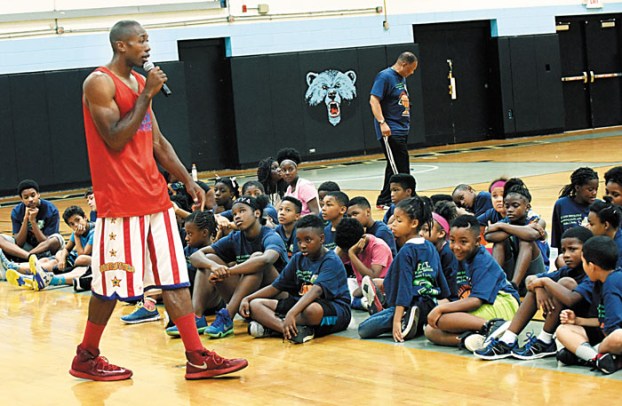 Not exactly the beginnings that you would expect for a Harlem Globetrotter.

“After I was in Belgium, I came home to take care of my child, and then the Globetrotters gave me a phone call and invited me to a game,” Manning said Friday while in Salisbury to speak at a basketball camp for children in the West End community.

Since going to see his first Globetrotters game, the rest was history for Manning.

Manning, 31, played with the Harlem Globetrotters from 2009 to 2015. He then decided to take a step back when his daughter got older. His teenage daughter now runs track and is also a cheerleader, following in her father’s athletic footsteps.

Manning lives in Rocky Mount and teaches music and math at Rocky Mount Prep School. He said he loves teaching because he knows how important having a mentor is, and because he gets to work with kids and change their lives for the better.

Manning was asked to speak at the basketball camp at Livingston College sponsored by the Families and Communities Together organization. His speech focused on staying motivated to make the right choices.

“Education is the first thing, and your attitude has got to be correct,” he told the students. “Have respect for all adults, your parents and your teachers.”

Manning believes in investing in the lives of young people in the community and is hosting the “Be a Star Basketball” camp in Salisbury next week at Hall’s Gym. For more information about Manning’s camp, contact him at jolly_manning@yahoo.com or call 252-266-2152.

Trent Gymnasium at Livingstone College was loud Friday morning with yells and laughs echoing through the building and basketballs... read more