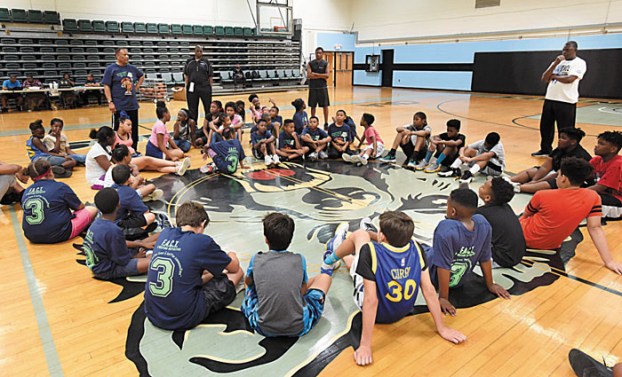 Coach DeCarlo Duling on the left back talking to the campers and Coach Wayne Brown on right back. Wayne Hinshaw/For the Salisbury Post

Trent Gymnasium at Livingstone College was loud Friday morning with yells and laughs echoing through the building and basketballs bouncing all around.

The commotion was a basketball camp organized by FACT — Families and Communities Together, an organization that serves the West End community of Salisbury.

“We want to provide direction and guidance for the upcoming generation.” said Herbert Chambers, Chairman of the Board of Zion Hill Apartments.

FACT is a multifaceted organization that includes reading camps and ministries at local churches, as well as Friday’s basketball camp. The annual camp has been held for five years.

Throughout the week, kids learned technical skills such as how to dribble correctly, how to make a layup and how to have better form while playing.

While technical skills are a big part of the camp, Mary Hardin, a co-founder of FACT, said the main point is to teach the kids valuable life skills.

“We want them to show respect for adults, teachers and themselves, we want them to have Jesus in their life so that they are centered. And we want to show the kids that they can become whatever they want to become if they just stay focused on the right things.” said Hardin.

FACT leaders were thankful to receive financial help from the Blanche and Julian Robertson Foundation, using it for equipment, food and other expenses. They partnered with nine local churches to organize the camp.

Organizers of FACT reached out to reliable older teens and college students from local churches and the community to be mentors for the young students. Jhera Phillips, a Livingstone College freshman, said it was a rewarding week.

“I love seeing the impact that we are making and the smile on their faces. They call me Lebron James when I walk in,” Phillips said with a laugh.

FACT also brought in speakers to talk to the kids throughout the week, including several medical professionals and people in the business community. A dentist came to tell the kids how to take care of their teeth.

“They had people come in to tell us how to make good choices. This camp really helped me out,” said student Ghavis Shuford.

As a treat on the last day, organizers of the camp brought in Jolly Manning, a player for the Harlem Globetrotters and a graduate of Catawba College. He gave a speech to the students before doing some hoops tricks, telling them to prioritize school and hard work in their lives.

Manning said that coming to camps like these to be a mentor is important to him because he had a mentor in college, Freddy Lynn. Lynn was an assistant coach at Catawba who influenced Manning’s life personally and professionally.

“He was really my father figure,” said Manning.

Before the day was over, leaders of FACT held a short memorial ceremony and presented a plaque as a token of gratitude for the years of work that Freddy Lynn had put into the basketball camp. Lynn passed away in June. Theresa Lynn, his wife, accepted the plaque.

Chambers said FACT aims to help students see what the real world is like and puts a strong emphasis on being an encouraging and positive influence in the lives of the kids.

“We want FACT to provide guidance and direction,” said Chambers. “And we want to teach the kids that whatever it is they want to do, they can do it.”

David Freeze: Another journey comes to an end