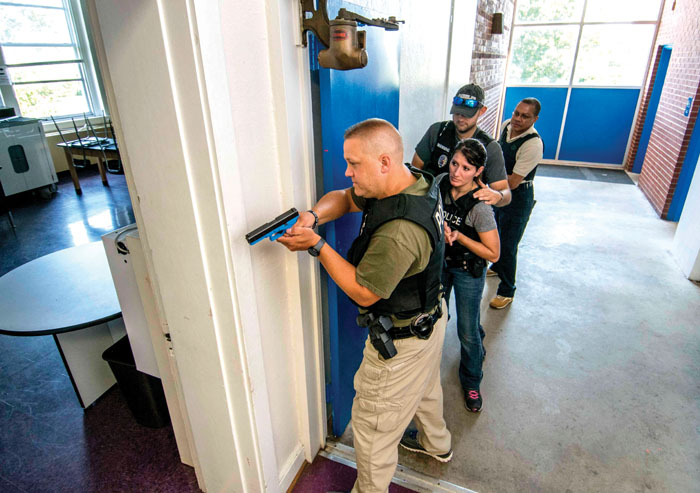 It’s 3 a.m., and a domestic call comes in at the 911 communications center from a scared mother who says her son is acting erratically.

The son has his father’s 9 mm handgun and has threatened to kill himself and anyone who tries to stop him. Two officers arrive to find the son has barricaded himself inside the home.

What do they do?

It’s the question law enforcement officers across the country ask themselves as they address high-risk situations on a regular basis. Officers locally and across the nation are surrounded by issues of heightened racial tensions, distrust of police among some in the community, and in some cases limited training and officer shortages.

Officials with the Salisbury Police Department and Rowan County Sheriff’s Office say they constantly analyze and refocus their efforts to promote effective crime-reduction strategies while at the same time increasing transparency and establishing stronger connections in the community. The two agencies are making changes by employing some policing practices from the 21st Century Policing model.

The model is a result of a 2014 presidential task force that assembled law enforcement, community leaders, educators and others who spent three months examining how to build trust between law officers and the communities they serve.

The model has six pillars — building trust and legitimacy; policy and oversight; technology and social media; community policing and crime reduction; training and education; and officer wellness and safety.

The tenets essentially embody a change in the culture of policing and provide a space for community engagement.

Community policing was really getting started locally in the mid-1990s, and now that focus has changed, said N.C. Justice Academy Director Trevor Allen, who served nearly 15 years with the Salisbury Police Department.

“… Traditional policing was waiting for a crime or report of a crime to be received and then going to try to find a solution after the fact and make an arrest or something of that nature,” Allen said. “Community policing really changes that focus to how can we partner with the community on the front end in a proactive atmosphere and try to collectively find solutions to crime, quality of life issues before they happen.”

He said the model is based on the idea that there is no separation between the public and police and that “ideally they should be working together constantly to solve issues.”

Allen said some tenets have been part of policing for a long time, but a cohesive plan had not been put together until the task force set its guidelines.

Salisbury Police Department Deputy Chief Shon Barnes said traditionally, officers have been trained to press the target and neutralize the situation. But there’s a move toward a strategy called Integrating Communications, Assessment and Tactics (ICAT), which is a new way of thinking about use-of-force training. It lets officers assess situations and make effective decisions, then document and learn from their actions, he said.

Barnes, who has training in ICAT, wants to implement elements of it in the Salisbury Police Department.

“The ICAT training says, ‘What is your plan when you turn down that Glock?’,” Barnes said. “We will cover evidence-based strategies that worked for crime reduction, learn and talk about what does the evidence says works.”

The department recently started a foot patrol pilot program in which officers periodically walk through five neighborhoods of focus.

Police Chief Jerry Stokes has said foot patrols are an example of a commitment to evidence-based policing. He cited a recent study by researchers at Temple University that found that foot patrols reduced short-term crime and improved relationships with the community through officer visibility and citizen engagement.

Barnes said he doesn’t believe officers need more training, but more education. He said at some point the department did not make training a priority, and “that was a mistake.”

“My personal philosophy is the role of policing is to protect the constitutional rights of all. If we adapt that as our model, we really cannot go wrong,” Barnes said.

He said it’s his job to look for the most relevant training available.

One element of the 21st Century Policing model is community engagement. The Police Department has created a chief’s citizen advisory board to build a dialogue with residents.

Rowan County Sheriff Kevin Auten said his deputies seek community engagement with young people. The agency has for a few years held summer camps where children learn about law enforcement and, more important, have positive interaction with an officer, he said.

N.C. Attorney General Josh Stein travels the state to speak with law officers about the initiatives they use successfully. In the North Carolina cities of Nashville and Fayetteville, police chiefs have created programs that redesign the way officers interact with residents on drug addiction, Stein said.

“The opioid crisis is driving so much of crime and impacting the criminal justice system and filling our jails that the law enforcement departments concluded that they just needed a different approach,” Stein said.

The programs are a way to divert people from the criminal justice system into addiction treatment.

Stein said his office is working on a resource manual that will be based on what he is learning as he travels across the state.

“Whatever the innovation is, we want to put it into a single document that communities around the state can review,” he said.

A number of courses offered at the N.C. Justice Academy speak to community policing, tactical communication, use of force, and decision making, all of which are areas local agencies are working on.

One such course is Community Policing Before the Crisis. It looks at how authorities find ways to develop relationships with community residents before crime happens.

Another course, Verbal Judo, teaches officers how to diffuse a potentially dangerous situation. The newest course, Allen said, is called Use of Force Decision-Making. It puts officers in scenarios and shows them options that may not have been considered before.

The academy has other courses on de-escalation and crisis intervention.