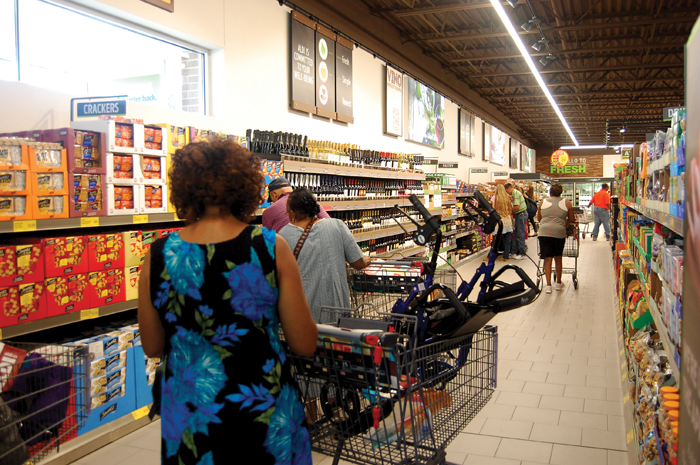 Shoppers check out the renovated Aldi on South Avalon Drive. The store reopened Thursday with a new look and new items on the shelves. Jessica Coates/Salisbury Post

SALISBURY — As part of a nationwide push to update its grocery stores, Aldi reopened its Avalon Drive store Thursday that features a new interior and new products on the shelves.

The store had been closed nearly two months for renovations.

Residents of Salisbury and the surrounding area lined up outside the store — located at 115 S. Avalon Drive — early Thursday to make sure they didn’t miss a thing the store has to offer.

“I went to bed early. That’s what you’ve got to do,” said Joseph McGrath, a Thomasville father of six who said he hunts for grocery store deals. “Because if I’m the only breadwinner, it’s $200 a week on groceries. And that’s not buying steak.”

He and four of his six children — Charity, Grace, Shayla and Bethany — arrived at the store at 3:30 a.m. to make sure they were the first ones in line.

McGrath said that although they were there to buy groceries, their main incentive for arriving early was to have the best possible chance at winning Aldi gift cards.

“You know, if we get two $100 gift cards, that buys our groceries for one week. That’s like getting a bonus,” McGrath said. “Wouldn’t you do it, for just a little lack of sleep?”

Aldi district manager Daniella Carissimo said the gift card giveaway was something that every Aldi store is doing for its reopening.

“The first 100 customers, we give them a card and then they come in and get a gift card in exchange. And it’s anywhere between $10 and $100,” Carissimo said.

Other customers who were among the first 100 in line were simply eager to see what changes had been made to the store.

Dianne Rustin, who lives near the store, said she had missed being able to shop at that location.

“I just like shopping here because the prices are so good,” Rustin said. “And my sister loves going here. So I like the store.”

Rustin said her routine is to shop at different stores in order to find the best prices.

“I start here first, then I go to Food Lion. But now they’re saying that you’re going to have a little more variety now of everything, so that’s going to be wonderful,” Rustin said. “So that way, I won’t have to be running to Food Lion. I can get everything here.”

“So they definitely are going to see different items than they saw when we shut down,” Carissimo said.

Carissimo said the building has been modernized with higher ceilings and new wall displays.

“We’re just really excited to have everybody here,” Carissimo said. “We hope we, you know, get some new customers as well because we are a little more modernized. It looks brighter and just more fresh.”

By 8:45 a.m., after they had gotten to shop around for a bit, McGrath and Rustin both said the new store was worth the wait.

“So far, it’s … I haven’t gone around yet, but the egg prices were good,” Rustin said, laughing. “And then my watermelon — I love the watermelon. Somebody had already told me about Aldi with their watermelon, and I said, ‘Well I’m going to make sure I try it.’”

As he was checking out with his daughters and a load of groceries, McGrath said the trip was “definitely worth it.”

“The store was very clean and, I think, since they do not bag the groceries, they beat Walmart every time for speed. Hands down,” he said.

His daughter Shayla added, “It was awesome.”

The family ended up with $245 in gift cards.