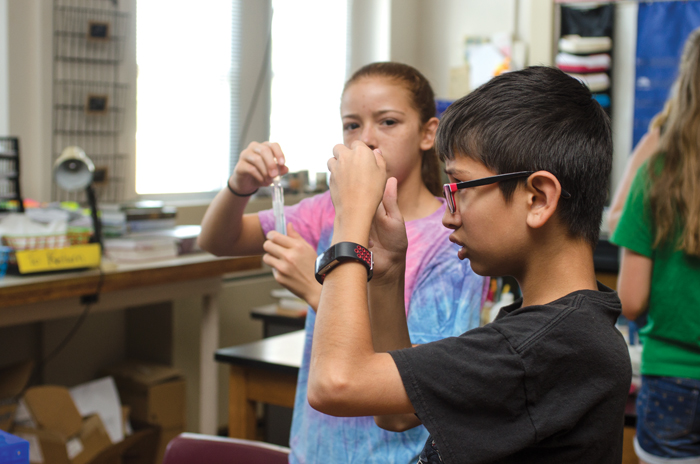 SALISBURY — Shouts and yells echo in the large classroom as eighth-grader Jack Heilig places another textbook on the already towering stack.

At the base is a slender bridge made of strips of wood, woven and glued together and suspended between two boxes.

The bridge is of Jack’s own design, and he’s testing out its strength. But the classroom almost runs out of textbooks before the bridge gives out. When it snaps, cleanly, on one end, it dumps a load of 25 hefty high school texts on the floor.

Jack is one of about 120 kids participating in Salisbury High School’s summer STEM Academy. He said he’s enjoyed it so far, and this is his second year.

“I liked it last year and thought it’d be fun this year,” he said.

Of his sturdy bridge design, made in one of the academy’s classes, he smiled.

Each July, the academy seeks to open the eyes of county middle-schoolers to science, engineering, technology and math and encourages them to push the boundaries of the possible.

Rising sixth- through ninth-graders with an interest in STEM are invited to attend as long as two weeks of the four-week experience. While the academy runs for a month, two of the weeks have repeating subjects.

Usually, a camp like this would have a high-dollar price tag, organizer Brian Whitson said. But students attending the academy are charged only $25 per week, and fee reductions and other aid is available, if needed.

“We do get funding to help keep this a very accessible camp. … That’s quite a bargain,” he said.

Whitson sees the camp as a community service — a chance to offer students an up-close and personal look at STEM in a way that’s fun and relevant.

“I really look at this as a great opportunity for community outreach to get exposure to STEM in a way they may not at their current school,” he said.

Teachers who lead courses are told to keep it fun and to design lessons with a “hands on, minds on” approach.

In Amber Lawson’s class, students took swigs of Gatorade, swished it around and then spit into a cup. When mixed with isopropyl alcohol, they could see — and extract — strands of their own DNA made milky white by the alcohol.

Lawson said the lesson followed an excursion to a nearby stream, where students studied micro-organisms and learned about DNA.

“So I wanted to show them that they had their own DNA,” she said.

At a table, seventh-grader Lucy Woods used a pipet to lift the hair-thin strand of her own DNA and drop it into a separate container.

“It was fun — kind of different,” she said of the experiment. “Nothing we’d do in our school.”

In other classes, students learn about Photoshop, coding, robotics and meteorology. Often, the lessons combine more than one subject. Mazes laid out in blue tape on the linoleum of Salisbury High School’s third floor help students learn about coding, physics and math — among other things.

“It’s kind of all being pulled together,” Whitson said.

And, above all, it’s fun, active and lacks the pressure of regimented class schedules, homework and grades.

“What kid wants to come in the summer and sit? Really,” Whitson said with a chuckle.

For some students, the STEM Academy has become a yearly tradition. Matthew Epley will be a freshman at Carson High School next year, but he’s been coming to the STEM Academy since he was going into sixth grade.

“It’s a good getaway from the boring of home,” he said.

Matthew said he loves that the classes have a focus on learning but not on grades or tests. Each year he’s learned something new and taken different courses. And as he’s gotten older, the more challenging those courses have become. In the four years he’s been at the academy, the most useful thing he learned was how to use Photoshop.

“So that’s one thing I could actually do in a career,” he said.

But what that career would be is still up in the air.

“I want to open myself to any possibilities,” he said, “because who knows what will happen?”