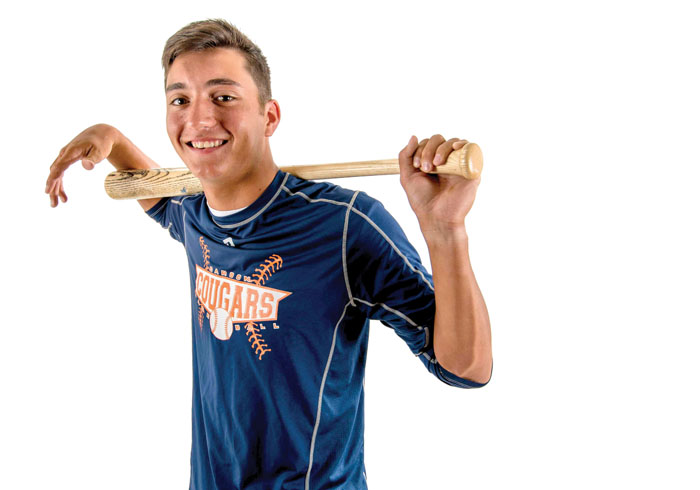 SALISBURY — It sounds harsh, but maybe the best thing that happened to Rowan County Athlete of the Year Owen White this summer was getting cut for the first time.

White, a rising senior at Carson, is such a natural athlete that he’s always made sports, especially baseball, look easy. But baseball against the nation’s best isn’t easy. He found that out while competing in a setting where all nine players on the field were the Owen Whites of their respective hometowns. One of 80 high school players — and the only one from North Carolina — invited to participate in the Tournament of Stars in Cary, White threw three scoreless innings in his only pitching appearance. He fired 18 of his 30 pitches for strikes, but he didn’t make the roster when the Team USA 18U baseball roster was trimmed from 80 to 40 for the next round of competition.

“I didn’t have great command of my off-speed stuff the day I pitched,” said White, who allowed four hits and also hit a batter. “Against the caliber of hitters that were in Cary, I needed to have everything working.”

White, who has committed to the University of South Carolina, took batting practice every day in Cary, but he didn’t get a chance to hit in a game in the Tournament of Stars — or play shortstop, something he does awfully well. He’s a strong enough hitter and smooth enough fielder that he could be a two-way player, even at one of the nation’s top college programs.

“I had a blast living with a host family in Cary and I got a lot of cool gear from Team USA, but being cut was humbling,”White said. “But I did learn a lot about being a good teammate and I learned that I’ve got to stay level-headed and I’ve got to keep working. I still need to better myself in a lot of ways.”

White, who also stood out as a football quarterback/punter and basketball forward for the Cougars, has a great chance to be the state’s best baseball player next spring. He racked up a pile of baseball awards as a junior — All-State by the North Carolina Coaches Association, All-North Carolina first team by USA Today, Rowan County Baseball Player of the Year, Rowan County Co-Pitcher of the Year (with East’s John Owen) and South Piedmont Conference Pitcher of the Year.

Jeff Chapman, regional sales manager for Dynamic Fitness & Strength and a former football coach in the county for decades, sponsors the Darrell Misenheimer Award that goes annually to Rowan’s top male athlete as chosen by the Salisbury Post sports staff. White has exceptional athletic genes on both sides of his family and is the sixth member of his family to be named county athlete of the year. The late Darrell Misenheimer, co-winner of the inaugural award in 1975, was White’s uncle. White’s cousin, Danny Misenheimer, won twice in 1999-2000. White’s mother, Casey Lanning White, won in 1981. White’s aunt, Anita Lanning Lagle, won in 1985, while White’s aunt, Hillary Hampton Nixon, was honored in 2004.

Owen White’s family connections also include three older sisters, who were outstanding athletes.  At West Rowan, Jacqueline won a Rowan County Player of the Year award for softball, played on two state championship teams and then set records as Catawba’s first baseman. Mackenzie, who played at West and Carson, was runner-up for Rowan County Athlete of the Year in 2007 and played two sports at Catawba. Michaela, who graduated from Carson, was Rowan County Player of the Year for volleyball four straight seasons from 2010-13 and will be competing at UNC Wilmington this fall.

“They don’t cut me any slack,” White said with a laugh. “They’ve always pushed me and they like to tell me I haven’t done anything yet. I’ll get a ‘Good job’ from them now and then, but just once in a while.”

The 6-foot-3 White’s 2016-17 school year started with football. He played mostly quarterback, but also receiver, defensive back and punter. He was second team all-county at quarterback and punter. Carson was a running team but looked to the air in the first round of the 3A state playoffs and gave Pisgah a scare. White was 15-for-28 passing for 175 yards and also ran for 42 yards.

In the prep basketball season, White averaged 11.6 points and 8.0 rebounds and was second team all-county. He scored in double figures in Carson’s last 10 games and poured in 28 points against West Rowan in the Dale’s Sporting Goods Sam Moir Christmas Classic.

“He’s shot better than 40 percent on 3-pointers the last two seasons and he can get really hot at times, like he was in that West game,” Carson basketball coach Brian Perry said. “Owen competes hard and was close to being our leading rebounder. We didn’t really have a big man, so he was always guarding someone in the post, learning on someone a lot bigger than he is. He’s meant a lot to our program, and as good a baseball player as he is, he’s always put in the time it takes to be good at basketball.”

In the spring, White’s baseball numbers were simply numbing. He was one of the best juniors in county history as a two-way performer, batting .473 with 22 RBIs, while going 8-1 on the mound with an 0.33 ERA and 94 strikeouts in 64 innings. He threw a no-hitter against East Rowan. He already holds school records as a hitter (most career doubles) and as a pitcher (most career strikeouts).

In April, White made his verbal commitment to South Carolina. That took a burden off his shoulders, but it also meant he had to tell a lot of coaches he liked that he wasn’t going to their school.

“That was one of the hardest things I’ve ever done — telling people who had treated me great that I wasn’t coming,” White said. “But my heart and my gut said South Carolina was the place to go. If that day comes when I’m drafted by Major League Baseball, I’ll deal with that, but right now I’m just working hard with the idea of being good at South Carolina.”

Carson coach Chris Cauble, who was Rowan County Male Athlete of the Year in 1985 when he starred for East Rowan, has known White would be a special for a long time.

“He’s a great player, but more important than that, he’s a great person,” Cauble said. “I’ve seen him take time to talk and laugh with special-needs kids after games. How many star players are even going to notice those kids, much less spend some time with them after a tough ballgame?”

“People think he must have had things given to him, but that’s far from the truth, and it bothers me,” Cauble said. “He works as hard as anyone. He’s very deserving of every bit of recognition he’s gotten.”

Besides his trip to Cary, White played in elite national tournaments with the South Charlotte Panthers showcase team this summer in Florida and Georgia. One of the pitchers he faced was Kumar Rocker, a Georgia youngster who might be the No. 1 prospect in the Class of 2018.

White more than held his own in those tournaments and will enter his senior year as a top-25 player nationally in the Class of 2018. He’s on the first team preseason All-America squad that was announced by Rawlings.

“This county is stacked with great athletes,” White said. “Any county award is a great honor.”