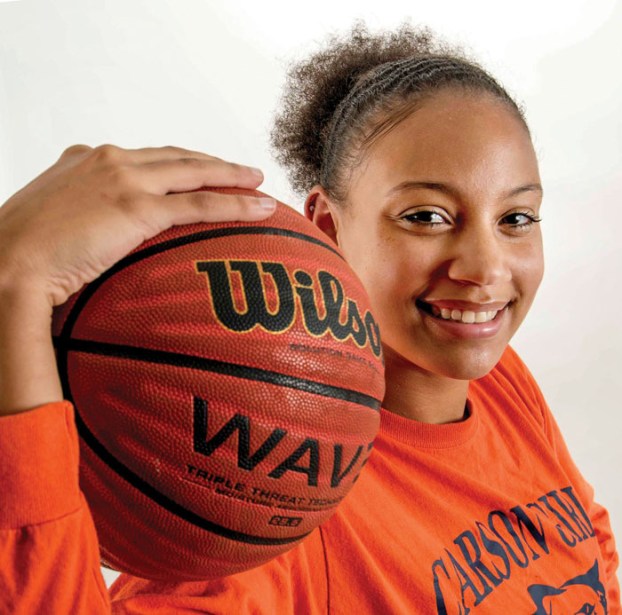 SALISBURY — Carson basketball coach Brooke Misenheimer was watching the 4×100 relay in the Rowan County Track and Field Championships last April and her brain had trouble processing what her eyes were seeing.

She knew Rowan County Female Athlete of the Year McKenzie Gadson was fast, but this fast?

Gadson, the anchor for Carson’s 4×100 team, grabbed first place in the event for the Cougars with a phenomenal finish that left spectators gasping. Her blinding burst would help Carson take the county championship.

“I know the 100 isn’t even McKenzie’s best distance, but she just ran a girl down,” Misenheimer said. “Her speed can be amazing, and it’s the same way in basketball. She can play very fast. On a basketball court, she’s running at a different speed than everyone else.”

Gadson isn’t devoted to track, she’s just really good at it. She’s a natural when it comes to sprinting or leaping. In the South Piedmont Conference championships, against challenging competition, she won the 100 meters, the 200 meters (that’s her best distance) and the long jump. She was Rowan County champ in the long jump, suddenly soaring past the 18-foot mark. She took second place in the 100 and 200.

All in all, she was the county’s second-best female track performer, behind only North’s state champion sprinter Payton Russell.

“But track is something I do mostly because it’s a great way to keep in shape for basketball,” Gadson said. “Now track has become sort of a fallback plan in case basketball doesn’t work out.”

Gadson won the 3A Midwest Regional championship in the 200 meters and blazed an even faster time for fifth place in the 3A State Championships (25.24 seconds). Still, when you talk about track, she politely shrugs. Talk about basketball, however, and she beams. That’s clearly where her heart is.

Yet, it was her track excellence that separated Gadson from the competition and made her the top choice for Rowan County Athlete of the Year. It gave her a leg up on two other awesome rising junior basketball players — South Rowan’s Janiya Downs, who is good in track and volleyball, and Salisbury’s Bryanna Troutman, who earned accolades in softball. The other leading candidates were Salisbury rising senior Maria Capito (tennis, basketball, soccer) and Carson graduate Madison Barnhardt (volleyball, softball).

Gadson is the first sophomore girl to be honored as the county’s athlete of the year since North Rowan track phenom LaTasha Pharr, who went on to star at Alabama, was honored in 1999.

Jeff Chapman, regional sales manager for Dynamic Fitness & Strength and a former football coach in the county, sponsors the Tracy Connor Award that goes annually to Rowan’s top female athlete as chosen by the Salisbury Post sports staff. Connor, who starred for South Rowan’s basketball program, was county player of the year in 1991 and 1992 and is a member of the Wake Forest Hall of Fame.

The Gadsons moved to Rowan County from Florida the summer before McKenzie and her twin sister Mikaila started the ninth grade. Mikaila is an outstanding athlete as well and was instrumental in Carson winning the county track championship. Mikaila doesn’t play basketball. She prefers volleyball.

“That family moving here was the best surprise I’ve had in all my years of coaching,” said Misenheimer, who has guided the Cougars since the school opened. “McKenzie was the new kid in town, and she turned out to be just a wonderful addition for us.”

Gadson turned in a strong basketball season for a 21-7 Carson team and was first team all-county. She was the county’s most efficient offensive player with her 14.2 points per game coming on a county-best 56 percent shooting from the field. She averaged a team-high 8.1 rebounds and tied for the team lead with 2.8 steals per game. Playing 28 steady games, she scored in double figures 26 times. Her high game was a 30-point outburst against West Rowan in January.

Gadson has 675 career points at the midpoint of her high school career and is on track to become one of the top scorers in school history.

“She’s a natural athlete with a lot of ability, and she’s long,” Misenheimer said. “She’s 5-foot-8 or maybe 5-9, but she plays 5-11 because of that length. Those long arms and her speed make her tough at the top of our press. If she gets a steal, she’s gone. She’s amazing to watch. No one’s going to catch her.”

Gadson’s dream school is Florida State. She’s already attracted recruiting interest from Division I schools such as Charlotte and Elon.

After 30 seconds or so at Catawba’s team camp, Gadson was offered a full ride by the Indians, so it’s likely that basketball is going to work out for her and will provide a free education. It helps that she has a 3.8 GPA. That separates her from many of the prospects with similar athletic attributes.

“She’s a smart girl and she watches a lot of film and learns from it,” Misenheimer said. “I don’t know that a lot of girls out there are studying film.”

At her height, it’s not a sure thing that Gadson will become a Division I guard, but this summer has helped her continue a painless transition away from the post, where Carson has used her out of necessity, to wing player, where her future is. Carson will have more size this season than it’s had in a while, so Gadson can play further from the hoop.

“I don’t shoot a lot of 3-pointers, but the wing is my natural position,” Gadson said. “I’m looking forward to playing more guard next season. I’m not really a post, but the team has needed me inside to rebound.”

Gadson has experienced a hectic summer. Carson attended four team camps in a span of about 10 days and won 23 of 26 games.

“McKenzie has had a great summer,” Misenheimer said. “We’ve seen different parts of her game evolving this summer. She’s been driving hard to the basket from the wing, getting to the foul line, and then winning games with clutch free throws. She’s never going to take a bad shot, but we’re seeing her be more aggressive than she’s been before and more vocal in a leadership role than she’s ever been. She can do so many positive things.

The Reign has provided regional exposure as well as top-flight competition for Gadson.

“We went to Louisville for 10 days and now we’re getting ready to leave on Friday to play in Washington, D.C., ” Gadson said. “There’s been a lot of basketball this summer, but I love it.”

From staff reports Nick Lyerly, who will be a freshman at UNC Greensboro, led qualifying for the 39th Horace Billings... read more