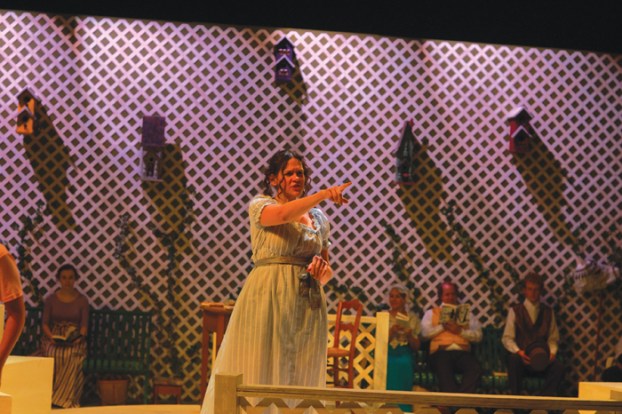 Melanie Brayton as The Author (Jane Austen) in 'Pride and Prejudice,' a St. Thomas Players production at Lee Street theatre.

‘Pride and Prejudice’ a story of complicated true love

With manners and grace, a St. Thomas Players cast brings to life the beloved book by Jane Austen, “Pride and Prejudice.”

Local author Jenny Hubbard adapted the play from her favorite book, and Claudia Galup, who has been a fan of both the book and Hubbard, directs this production by the Center for Faith & the Arts.

Emma Rose is the bright and headstrong daughter, Elizabeth “Lizzie” Bennet, who is most like her father, played by the dependable Chris Eller. Rose is fiery and assertive, tender with her sisters, especially Jane, played by Taylor Ellerbee with a sweetness and shyness just right for the character.

“Pride and Prejudice” is a comedy, of course, a look at the tightly prescribed manners of the British Regency period and at the often silly divisions between classes.

Marriage is about money, rarely love, and with a family of five daughters, it is the mother’s task to get them married off as quickly as possible to men of means. Theresa Pitner is the hyper-nervous Mrs. Bennet, in a constant state of nerves.

Because they are daughters, they cannot inherit their father’s estate. Marriage is the only way out.

The Bennets, alas, are burdened with the added worry about their cousin, Mr. Collins, an obsequious man forced into the clergy by his position in life. The always funny Jacob Brayton fits the verbose Collins to a T, with his overly serious delivery of ridiculous statements. It’s no wonder that Lizzie practically laughs in face when he proposes marriage to save the family home and alleviate their burden.

The added element in this production is that Jane Austen herself is on the stage — at least in the form of Melanie Brayton. Brayton sits at a table on the raised set, writing, commenting on the action and sometimes taking part, drinking tea with the sisters or urging Collins to be brief. For those who have not read the book, this can be confusing. She perhaps needs a word of introduction.

The rich, and therefore desirable, Mr. Bingly arrives with his disagreeable sisters in tow. Matthew Jones is quite the polite Mr. Bingley, a calming force. Amber Watson is his sneering sister Caroline, and Beth Bentley is his married sister Mrs. Hurst. Mr. Hurst, who enjoys the drink a bit too much, is played by Jamison Middlemiss.

But when the darkly handsome Mr. Darcy arrives, played with aplomb by the talented Matthew Monte, sparks fly between him and Lizzie, who finds him too proud.

How can they not fall in love?

Through a series of balls, walks, visits, machinations and outright lies, the Bennet girls meet men of character and men of deceit. Jane falls in love with Bingly, much to the chagrin of his sisters, and then Bingly removes to London. Younger sisters Kitty and Lydia spend too much time with the soldiers camped at Brighton, and Lydia, played by Phoebe Hollingsworth, is quite the reckless girl.

Sister Kitty, played by Keely Watson, follows Lydia wherever she goes. Sister Mary, played by Meghann Wood, is the bookish one content to stay at home.

True love never runs a smooth course, and we wouldn’t have the book or the play without complications. Try to keep up. Pay attention and follow the developments. The extensive details of the book just wouldn’t translate to a play. Hubbard gets high marks for wrestling it down to something more manageable while maintaining the flavor of the novel.

On an interesting stage, lined by lattice work and adorned with topiary, the scenes change. Chris Speer again does a good job with the design and lighting. Costume designer Nancy Gaines chose simple, empire waist knit dresses, adorned minimally, for the girls, along with appropriate shawls and hats.

The best sight gag are the horses Mr. Bingly and Darcy ride, earning chuckles every time they appear.

On sponsor night, there were several uncomfortable moments when actors stumbled their lines — the language is different, more refined than our everyday speech.

With a 15-minute intermission, the play ends after 10 p.m., a bit long, perhaps, for a summer night, but the story has multiple layers. Children simply would not understand the plot, but there is nothing offensive.

Betty Brown, widow of Dan Brown, founder of the Center for Faith & the Arts, is a sponsor, along with Dr. Martha West.

As if the heat and humidity were not enough, the North Carolina Department of Environmental Quality in Raleigh has issued... read more