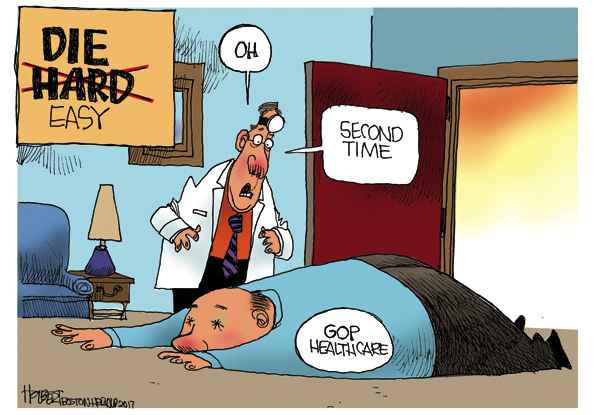 Letter: Both houses, presidency not enough power for GOP

After running for years on repealing the Affordable Care Act, Republicans finally got their shot. Air ball. Now, with control over all three branches of the federal government, they have found that it is much easier to run against legislation than to craft it.

While President Trump “was playing with a firetruck and trying on a cowboy hat,” as one Republican put it, GOP senators relayed their disdain for the repeal legislation and killed it. Then, Senate Majority Leader McConnell proposed a straight repeal with no immediate replacement. That suggestion died.

Trump said last October, “You’re going to have such great health care, at a tiny fraction of the cost — and it’s going to be so easy.” Today, he sang a different song: “I can tell you Republicans are not going to own it. We’ll let Obamacare fail.” He would rather let the health-care market collapse than work with Democrats to fix the ACA.

He said Republicans may have a better shot to repeal and replace Obamacare after the 2018 elections, if the GOP can pick up seats. A majority in the House and Senate is not enough for this legislation — it has to be large enough that the unpopular bill still passes with moderate defectors.

Although Mr. Trump did little to shepherd this legislation (he called the House version “mean” after Republicans stuck their necks out to pass it), fault does not rest with him alone. The GOP is more comfortable obstructing and opposing than it is governing.

The only way forward in the short-term is a bipartisan effort to improve what exists. But the ACA isn’t like one of Mr. Trump’s gaudy towers in Manhattan — it doesn’t have his name on it. Unfortunately for the country, its president would rather see health care fail than work with Democrats.

Laurels to plans for the new elementary school in the western part of Rowan County. It’s good to see the... read more