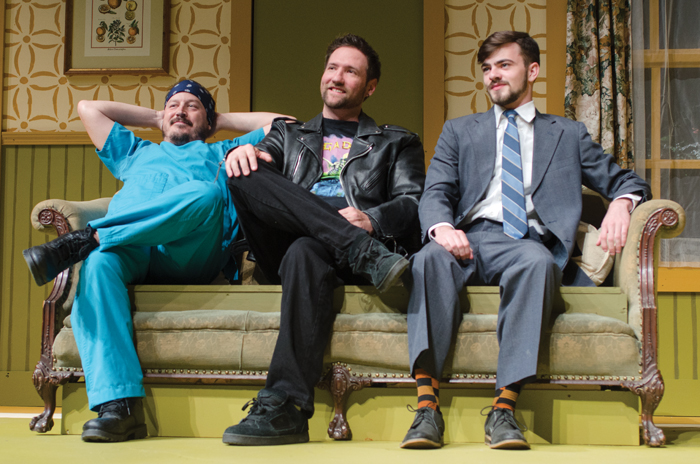 Tom and Linda Kerwood are a happily married London couple looking to adopt a baby.  It’s the happiest day of their lives as they await a visit from the supervisor from the adoption agency who will decide if they are fit to adopt a child.  And then Tom’s brothers, Dick and Harry, decide to stop by to help. What could possibly go wrong?

Then there’s Tom’s youngest brother Harry (Chris Love), who works at a hospital.  In an effort to help out an older brother in need, he has brought over a bag filled with body parts.  As Harry sees it, if a dead body is found buried in Tom (Patrick Moore) and Linda’s (Amber LaGore) back yard, the asking price of the house they’re renting will plummet, and they’ll be able to afford a down payment on it. Totally rational, right?

Matters quickly get out of hand as the hapless Tom juggles his unruly houseguests while trying to conceal his brothers’ mischief and thwart one crisis after another.
Written by the father-son team of Ray Cooney and Michael Cooney, PPT’s final production of the 2016-2017 season, Tom, Dick and Harry, is a hysterical farce that opens at the Meroney Theater next Thursday.

Perhaps nobody writes farce better than Ray Cooney, whose plays are a favorite of regional and community theaters across the country and include 18 titles that have run on London’s West End including; Run for Your Wife and It Runs in the Family.

The set for this hysterical chaos, designed by director Reid Leonard, is the Kerwood home and consists of many doors, allowing for the genre’s trademark door-slamming as characters enter and exit at a frantic pace, just missing each other, or arriving at inopportune moments.  Characters get locked in rooms, jump in and out of windows, and one even gets shoved inside the sofa to prevent his detection.

The Los Angeles Times put it perfectly; “Tom, Dick and Harry represents goofy comedy at its best, elevating the ridiculous into something approaching sublime.”  One thing is for certain…any fan of old-fashioned farce will love Tom, Dick & Harry!