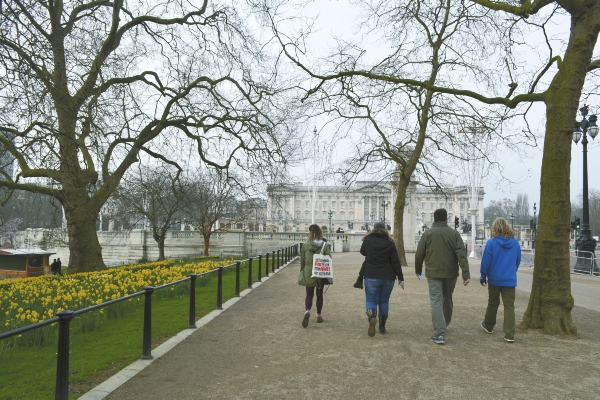 A group of Catawba College students visit London in March 2017 in a trip led by a professor. Despite the growing need for higher skills and training, skepticism about the value of a college education has grown. Photo by Susan Shinn Turner

A new study released last week by the Pew Research Center found that 58 percent of Republicans and right-leaning independents think colleges have a negative impact on the country. Distrust in higher education institutions among those on the right has risen consistently since 2010, when it stood at 32 percent.

While Democrats were much more optimistic in their view of colleges — only 19 percent had a negative perception — the Pew study is one of several in the last few months that raise questions about public confidence in the future of American colleges. The bottom line of the findings from the Pew survey, as well as from Gallup and New America, is this: Although Americans think that a degree is more important than ever before to economic success, they seem to be increasingly pessimistic that colleges can deliver on that promise given their ever rising costs and growing distance from the everyday concerns of parents and students.

This marks quite a shift in public opinion. Over the last several decades, even as the public’s faith in other institutions like the church, media, and government was plunging, higher education maintained a high standing. But the New America survey found that one-third of Americans think that colleges and universities put their own needs before those of their students.

Where did higher education go wrong?

Twenty years ago when I first started writing about higher education in the states, I would often find residents who loved talking about the value of their public universities. This was particularly true in states with land-grant universities, such as Iowa and Nebraska, where farmers or mayors of small towns would tell me stories about how a university researcher assisted them on a problem with their crops or helped with economic development. In places with large public university systems, like North Carolina and California, I often heard from people who didn’t go to college themselves who felt that their kids had a decent shot of attending one of the state’s campuses at a reasonable cost.

But those attitudes started to shift in recent years. Campuses that once felt accessible and served mostly the sons and daughters of state residents now suddenly felt out of reach. Tuition rates at public colleges and universities — which enroll 80 percent of students in U.S. higher education – have risen by some 30 percent since the Great Recession. Just before the 2008 recession, students and their families paid for about one-third of the cost of their education at public universities, and now they are on track to pay for most of it. In more than half of the states, they already do.

Beyond increasing tuition rates, public college leaders in many states responded to cutbacks in taxpayer appropriations by increasing the percentage of out-of-state and international students who pay higher tuition. That further frustrated state residents who felt the admissions process was a zero-sum game and every new out-of-state student meant one fewer spot for their sons and daughters.

In some cases they were right. One study in Washington state found that for applicants on the margin of being accepted to the University of Washington, that out-of-state students had a slight edge. Another study found that a 10 percent reduction in state appropriations at public research universities was associated with a 17 percent increase in international enrollment.

College leaders maintain they had no choice but to increase the numbers of out-of-state and international students to remain competitive with institutions around the world. Higher education is now a global game, even for state institutions, officials say, and the states can’t continue to depend on their colleges to rescue their economies, especially with fewer state dollars.

The expectations of the public when it comes to higher education are immense, so we shouldn’t be surprised when institutions fall short. American higher education was never designed to serve as many students of varying academic capabilities and professional interests as it does today. Nor was it intended as the sole training mechanism for a job. Colleges inherited that job when the economy transition away from manufacturing and into a diverse, information-driven economy deeply intertwined with the rest of the world.

When the Pew survey results were released last week, higher education officials were quick to blame the negative perception of their campuses by Republicans on widespread media coverage this past year of students who actively and sometimes violently protested conservative speakers. Still, the results should give college leaders pause given that Republicans control the presidency, both chambers of Congress, and the majority of statehouses and governors’ mansions and no matter what, higher education still depends on the GOP to support colleges and students at the federal and state level, at least for now.

Jeffrey J. Selingo is the author of “There Is Life After College.” about how today’s graduates launch into their careers. He is former editor of the Chronicle of Higher Education, a professor of practice at Arizona State University, a trustee of Ithaca College and a visiting scholar at Georgia Tech’s Center for 21st Century Universities.

A new hoop for high school graduates to jump through?

Bloomberg View Getting a high-school diploma in Chicago will soon depend not only on your past grades but also on... read more