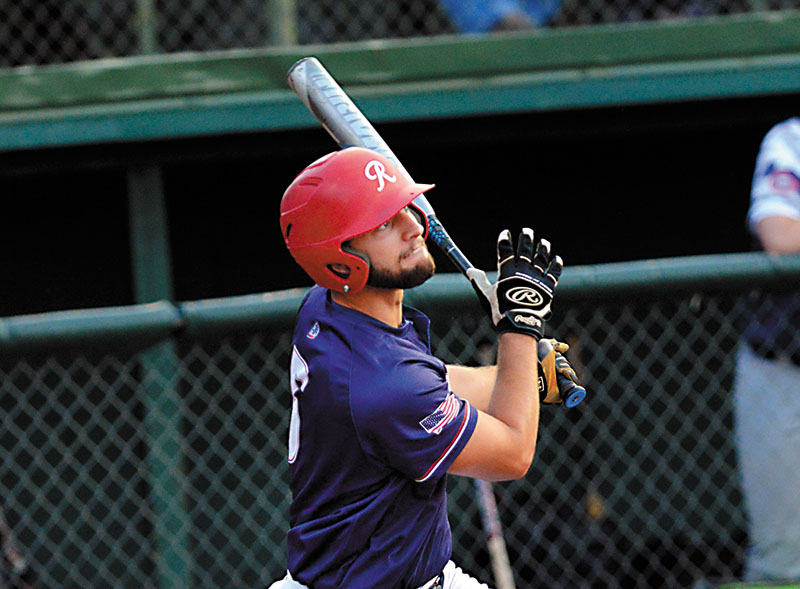 Wayne Hinshaw / Salisbury Post file photo Rowan Legion’s Jake Pritchard gets a hit against High Point during a game on May 25, 2016.

CHARLOTTE – Jake Pritchard has been an exceptional baseball player for a while, winning awards such as 2016 Central Carolina Player of the Year as North Rowan’s catcher and starting in left field for the Rowan County American Legion team that finished second in the nation last summer.

Just two days after the Legion World Series ended in Shelby, Pritchard was reporting to Lenoir-Rhyne University to begin the next phase of his life as a student-athlete.

His freshman year was a challenging, dues-paying experience. A lot of classes, a lot of practice, a lot of time invested in baseball, but not much on-field action.

“I only played in one varsity game,” Pritchard said. “One-for-three. One RBI. But I knew that was going to happen my freshman year. Lenoir-Rhyne has a lot of talent.”

Fortunately, Lenoir-Rhyne is one of the handful of area schools with a jayvee program. So Pritchard did get some live action against the Belmont Abbey jayvees as well as against NAIA programs, such as Montreat, and some junior colleges.

“I got to play in 14 jayvee games, and things went pretty well for me,” said Pritchard, who hit one jayvee homer. “I looked at those jayvee games as important and I was happy getting a chance to play. Those games were my playing time.”

Pritchard has continued his development this summer with the Charlotte Latin-based Carolina Vipers of the Southern Collegiate Baseball League.

“One of my Lenoir-Rhyne teammates, (former Lake Norman infielder) Jackson Mead, played for the Vipers travel ball program when he was growing up and mentioned to me that the Vipers might be a good opportunity for me this summer,” Pritchard said.

Pritchard has swung a wood bat with authority. He’s been putting up numbers close to the ones he did at North Rowan. He’s caught some, but mostly he plays left or right field for the Vipers. He was chosen to play in the all-star showcase held over the weekend at the Kannapolis Intimidators Stadium, where SCBL players competed along with athletes from four other wood bat leagues.

After driving in two runs on Monday in the Vipers’ first game after the All-Star break, Pritchard (6-0, 190) is batting .435 with four homers, three doubles, a triple and 16 RBIs in 16 games.

“I’ve tried to be really aggressive and I go to the plate looking for a pitch to hit early in the count,” Pritchard said. “That’s been working pretty well.”

The classroom went well for Pritchard as a freshman. He majors in exercise science and has the long-range goal of going to grad school and becoming a physical therapist.

His sophomore year should also bring more success for Pritchard on the baseball diamond. He says that last summer’s Legion run provided his best baseball memories,  but there should be some good days ahead for him in Hickory.

“I’m already excited about getting back to school and putting the work in,” Pritchard said.