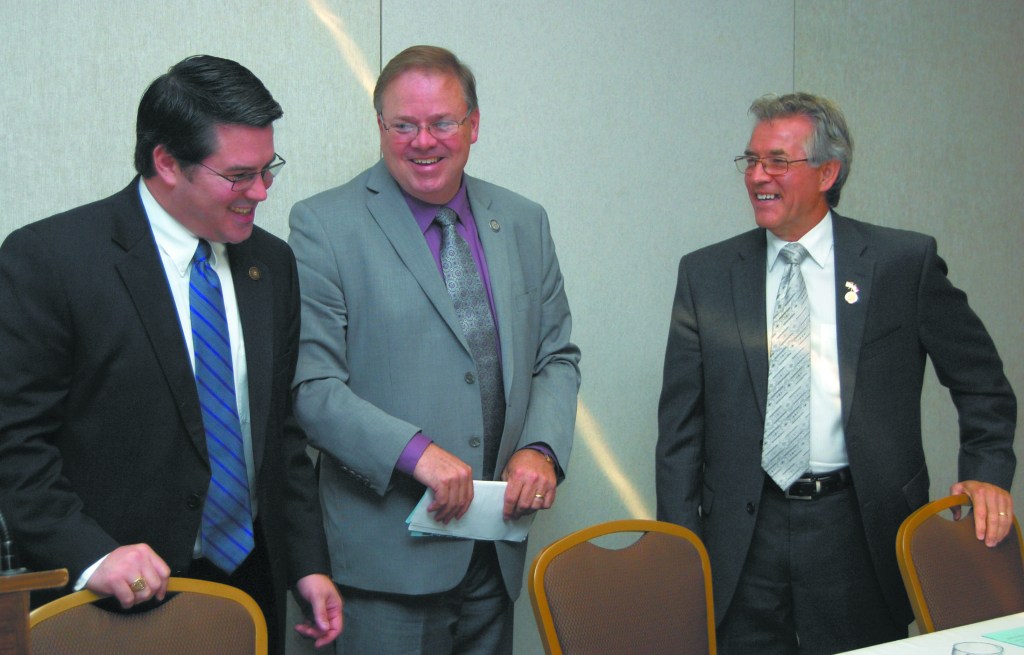 In this Salisbury Post file photo, N.C. Sen. Andrew Brock, Rep. Fred Steen and Rep. Harry Warren share a laugh after speaking to members of the Rowan County Chamber of Commerce in 2014. Photo by Emily Ford

RALEIGH — A fellow reporter and I tried recently to make a list of N.C. legislators who have traditional, 9-to-5 jobs.

Our list was short. Few can balance the legislature’s grueling schedule with the demands of a boss and set hours. Imagine telling your supervisor that you won’t be available most weekdays for roughly half the year. You’d probably get fired.

Most lawmakers are either attorneys, or they’re retired or own their own businesses. Out of 170 legislators, only one currently works as a teacher.

North Carolina technically has a part-time legislature, but the schedule more closely resembles a full-time job — and the sessions are getting longer. The 2015 session stretched from January to September, and though 2016 was supposed to be a “short session,” the House and Senate returned for five special sessions. While legislators managed to leave Raleigh on time this year, they plan to return in August. And again in September. And maybe in October or November too.

“It’s almost like some people want to come to Raleigh and get out of wherever they live,” former Rep. Gary Pendleton (R-Wake) told the N.C. Insider recently.

The extra sessions have fueled talk of a full-time legislature — including criticism from Gov. Roy Cooper — but the last thing North Carolina needs is a General Assembly that hangs out in Raleigh year-round.

A year-round legislature would mean unnecessary laws get passed because legislators would try to stay busy. Having a vague deadline to end the session forces them to prioritize and focus on bills they find most important. This year, out of about 1,600 bills filed, only 220 successfully passed both chambers.

The legislature needs to keep its part-time schedule, but the pay needs to reflect the amount of time required to serve. For about 20 years, legislator salaries have remained at $13,951 per year, plus a $104 per diem for food and lodging and a $559 monthly expense allowance.

That’s not enough to live on, but it’s not easy to get another job around the legislature’s schedule. The state is long overdue for an increase in that salary so a wider variety of people can serve.

Sure, lawmakers giving themselves raises wouldn’t be politically popular, but our legislature doesn’t seem to worry too much about its approval ratings. Chances are, a pay increase would drop out of the headlines as soon as another controversial bill comes along.

The state should also consider ways to make serving in the legislature more attractive to state employees. Perhaps a generous leave policy for legislative service would mean that teachers, police officers and others on the front lines of state government could help craft legislation.

A more diverse legislature would mean better laws, as legislators wouldn’t have to guess if their proposals make sense in the real world. They could simply walk down the hall to chat with a colleague with experience on the topic.

But don’t look for pay raises to be on the agenda anytime soon.

Most current legislators aren’t likely to take the political risk because their own wallets aren’t hurting: They’ve got an income outside beyond that $13,951.

As long as that salary doesn’t change, though, look for talented legislators to drop out of public service because their personal finances don’t allow it. One example is former Rep. Charles Jeter, a moderate Republican from Mecklenburg County who says his time in the House caused him to neglect his business and risk financial ruin. Once a rising star in House leadership, he’s now making $91,000 as a government relations coordinator for Charlotte-Mecklenburg Schools.

Plenty of government jobs come with decent pay — just not for the 170 legislators whose work affects us all.