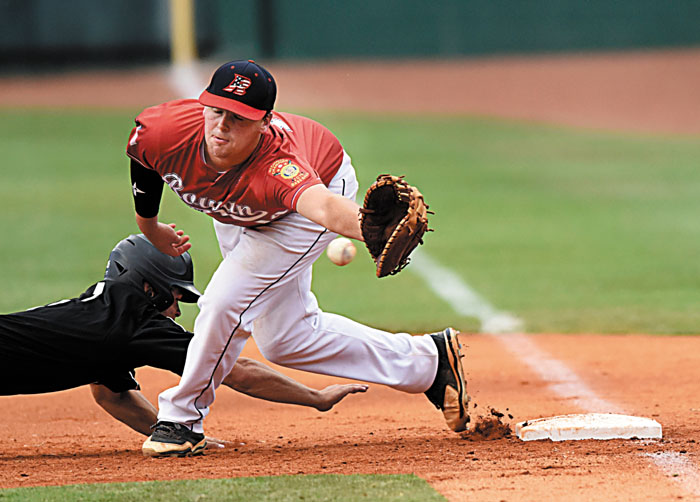 Post 342 sleepwalked through the final three innings and was denied the Area III championship, falling 8-3 to underdog Randolph County at Newman Park.

“I think we played a good team and they grinded us out,” coach Jim Gantt said after Rowan (31-3) played poorly for the second straight night and lost the best-of-three series. “At this juncture, after blowing the lead (Sunday) night when we could have won it, they regrouped and did what they needed to do.”

Randolph (28-8) overcame a 3-1 deficit and claimed a No. 1 seed in this weekend’s state tournament in Greenville. Rowan settled for a No. 2 seed and will open against Cherryville at 4 p.m. on Friday.

“It’s kind of humbling for us,” outfielder Henderson Lentz said after Rowan suffered its first loss in 16 home games. “We’re not all studs who can just walk out on the field and win ballgames. We have to find ways to do it.”

The back-to-back losses tarnish what has been an exceptional summer for Post 342, one that included a season-opening 18-game winning streak and later a 13-game run. Rowan’s bullpen was exposed in this series, allowing 19 runs in three games.

“It’s not easy taking this loss,” starting pitcher Hayden Setzer said. “We’ve got to get our heads right and get ready for the tournament. I don’t think everybody was focused these last two games.”

Rowan could have used another pitcher or two. Gantt paraded six of them to mound on a night when five others were off-limits due to the pitch-count rule. Left-handed Setzer opened the game with a three-pitch strikeout and threw first-pitch strikes to seven of Randolph’s first nine batters. But he wilted in the post-season heat — surrendering solo home runs to Dawson Painter and Catawba catcher Cameron Morrison in the third and sixth innings, before Jaxon Snider’s hit-and-run double tied the score in the seventh, ending his evening.

“Two home runs, but he gave them up to two guys who can handle the fastball,” Gantt explained. “Especially over the plate. You throw them fastballs over the plate and they’ll do that, especially in this ballpark.”

Both Painter and Morrison homered in Rowan’s 14-10 non-division victory against Randolph on June 1 at Newman. Last night they each drew the guests within striking distance.

“I remember mine leaving the bat,” said Morrison, who drove a 1-0 pitch over the wall in left-center. “I thought it was a pop fly, but I sort of black out on home runs. That’s the thing about playing here — you never know how the ball will fly.”

“Those are the hardest balls to judge,” said Lentz, Holshouser’s neighbor in center field. “He made a good effort. It just hit high off his glove.”

Post 45 finished the game with a healthy pulse. The victory went to right-hander Ryan Hill, who tossed 3 1/3 innings of scoreless relief after starter Bobby Weary faltered in the sixth. Hill walked two and allowed Chandler Blackwelder’s sixth-inning single that loaded the bases with two away, but induced eight groundouts and won his seventh game.

“I was just trying to pound the zone and throw it where Cam put his mitt,” he said. “I kept it low and trusted my infielders.”

It truly was a declarative victory for Randolph, who captured its ninth Area III title and first since 2013. “”It’s awesome,” Hill said with boyish enthusiasm. “Our whole team feels good. Now we’ve got to take the next step.”

Meanwhile Rowan, for the first time all season, will proceed with trepidation. Being the hunter instead of the hunted is a new sensation for the two-time defending state champion.

“We’ve just got to go to practice and forget about this,” Gantt said. “We go back to work tomorrow.”

NOTES: Area IV champion Cherryville is 31-6. … Last year Rowan prevailed through the state and Southeast Region tournaments before falling to Texarkana in the World Series. … Rowan outhit Randolph, 10-9. Walton and Lee Poteat had two hits apiece. … Web-gem catches were turned in by Randolph’s Dalton Hammer — who robbed Blackwelder with a snowcone grab against the left-field wall in the second inning — and Lentz, who raced to the warning track in right-center and made an Air Jordan snag of Peyton Williams’ second-inning drive.