Layers of love: For Becky Morgan, ‘quilting gives me a place to go’ 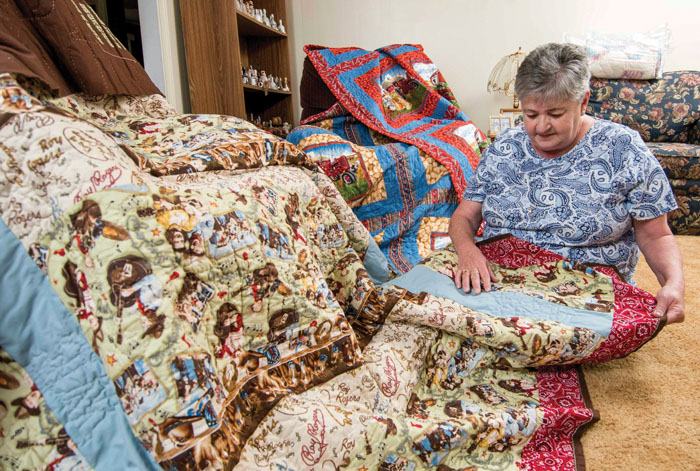 Becky Morgan poses with a Roy Rogers themed quilt that she made for a family friend of her husbands. The quilt, which was her 246th was made for David Bean in appreciation of what Bean meant to the Morgan family. Bean, who is a huge Roy Rogers fan, was surprised with the quilt last week. Jon C. Lakey/For the Salisbury Post

SALISBURY — When it comes to quilts, the Morgan siblings are covered.

Becky Morgan has seen to that. She is the wife of Richard Morgan, and the couple live in Monroe, Louisiana. They make a trip back to Rowan County at least once a year to visit friends and family, and each time Becky brings a quilt she has made for somebody.

“I actually have made seven quilts in the last three years, which is a feat in itself,” Becky said Monday from her Louisiana home.

Counting Richard, there are six Morgan siblings who grew up in Rowan County — two sisters and four brothers. Becky has made quilts for the sisters, Richard’s three brothers, brother-in-law Gary Bell and, most recently, Richard’s best friend and cousin, David Bean.

Bean was the best man at Richard and Becky’s wedding 10 years ago.

It’s difficult to appreciate — unless you’ve sewn quilts yourself — but Bean’s quilt was the 246th Becky has completed through the years.  She invested about 100 hours and gave it a Roy Rogers theme, because Bean has loved the movie and television cowboy since he was a kid.

A great friend of the Morgans, Bean was invited to a family gathering at the Bells’ house in Rowan County last week. They eventually lured him into the living room, where the Roy Rogers quilt was spread out over a sofa.

“I couldn’t believe it,” he said. “I couldn’t say nothing but, ‘Wow.’ The stitching is almost perfect. The cowboy hats and boots. … It’s pretty.”

Bean said the “RRs” throughout the quilt — Roy Rogers’ initials — also could stand for Richard and Rebecca, the couple who made the quilt possible.

Retired now, Bean used to drive trucks for Auto Truck Transport, delivering Freightliner cabs across the country. On one of his trips to California, he stopped at the Roy Rogers-Dale Evans Museum in Victorville. (The museum later closed and moved to Branson, Missouri.)

Often on his journeys, Bean would swing by Monroe, Louisiana, and visit with Richard. “He’s just like a brother,” Bean said.

Becky said she printed up a lot of Roy Rogers fabric and went from there. “I fashioned his quilt out of my head,” she said, describing the cowboy hat and boots stencils she also used.

“I like to quilt a shape rather than a just a straight line,” she said.

Becky, 60, has been making quilts since 1982, and she’s been sewing pretty much her whole life.

“The majority of what I’ve made I’ve just given away,” Morgan said. “I just love to make them, and I have several here at home.”

Of the 246 quilts Becky has sewn, she has only ever sold two.

Among her favorite quilts was a 12-square embroidered Christmas quilt she made for a contest. Each square had 85,000 stitches, done on an embroidery machine Becky owns. Her quilt earned third place out of 100 quilts.

She also enjoyed a quilt made out of canning print fabric. It was cut and sewn in the shape of a canning jar with a gold ring at the top. She also made a king-size quilt with her late first husband while he was fighting cancer.

“He and I made that quilt together,” she said. “He did the cutting, I did the sewing. … It holds special memories.”

Richard and his late first wife were in the insurance business years ago, and Richard became the Louisiana director for his company. He moved to Louisiana in 1983 and quickly became embedded there.

Richard met Becky, a Louisiana native, after his wife had passed away.

Becky has one more quilt story, one she’ll never forget.

When her father was 16, he was accidentally run over by a road packer — one of those steamroller-type machines that evens out asphalt. He had fallen from the cab, and the driver didn’t realize he was on the road surface during the first pass. He ran over Becky’s father again as he was looking around trying to find him.

Physicians said her father would be bedridden for life, never walk and never have children.

His grandmother — Becky’s great-grandmother — started making him a quilt but she never finished it. Within a year, Becky’s father was walking and talking. Later on, he and his wife would have four children, before he died at age 54.

Becky completed her great-grandmother’s unfinished quilt about 1986. She gave it back to her mother for warmth on cold days, but Becky ended up with the quilt again.

“I used it as a wall hanging for a while,” she said. Today, she keeps it stored away so light won’t damage it.

“It is a very, very special quilt,” Becky said.

Becky has four new quilts in the works, including an International Harvester-themed quilt for Richard and a baby quilt for a friend.

She likes to say, “Quilting gives me a place to go when I have to stay where I am.”

“A lot of people like to go places just to relax,” Becky said. “For me, it’s my quilts.”