Have we no sense of decency? 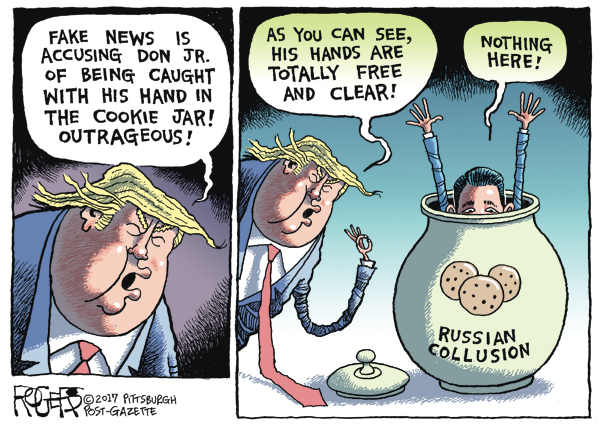 Editor’s note: This column was submitted by Mary Miller James of Salisbury. It was written by her sister about their father, William Miller who was Republican Barry Goldwater’s running mate in the 1964 presidential election. It first appeared in The News & Advance in Lynchburg, Va.

The recent revelation of Donald Trump Jr.’s contact with a Russian lawyer regarding some possible “dirt” on Hillary Clinton prior to the election last fall — something he contends any politician would do — brings me back nostalgically to a somewhat analogous situation in my father’s long political career.

In William Miller’s first leadership role within the Republican Party in 1960 as chairman of the National Republican Campaign Committee, prior to being elected Republican National chairman a year later, he immediately forbade the use of “dirty tricks” to win a campaign. He would say over and over, when staff came to him with sordid personal material they had dug up on various Democratic opponents, “That’s bunk. Forget it. We’re not going to use it. We’re going to win it the honest way, with hard work.”

His was the daunting job of recouping at least the 48 seats Republicans had lost in 1958 and he was under enormous pressure. I wondered if he might have occasionally wavered on that lofty principle.

But Dad’s assistant at the NRCC recalled to me one incident in particular that showed his resolve. There was a liberal incumbent Minnesota Democrat, a congressional colleague of my father’s, whom they badly wanted to defeat, who was known to have a drinking problem. A zealous researcher uncovered the fact that the congressman, a former judge, had accumulated several drunk driving arrests on his record, including a recent one. The staffer was pushing to give this information to the man’s Republican opponent, as ammunition for his campaign.

Several top aides were in favor of it, but the chairman immediately quashed the whole idea. “I know the guy, and I know his wife. They’re nice people and they have wonderful children. We’re not going to get into that,” he barked abruptly.

Can you possibly imagine what his response would have been if information from a foreign adversary, especially one trying to destroy our political system, had been offered to him? Dad was not short on profanity, so I can vividly imagine his brief and virulent response.

Politics has always been a rough and sometimes dirty business, but what the Trump organization has stooped to brings it to a whole new level, indeed a very low and despicable one. And we can only hope that the point to which the bar has been lowered does not remain the permanent standard in our political life.

My father, Bill Miller, finally the Republican Vice-Presidential candidate in 1964, was known to be fiercely partisan and a tough campaigner, but there were ethical standards, and just plain human decency, that marked his career every step of the way, and that he never abandoned for the sake of victory for himself or anyone else.