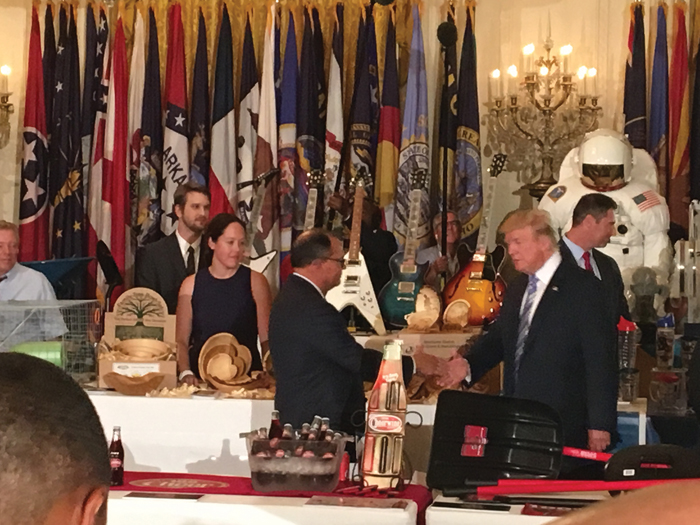 President Donald Trump shakes Cheerwine President and CEO Cliff Ritchie's hand during a Made in America event at the White House on Monday. Submitted photo

WASHINGTON, D.C. — Cheerwine was born in the South, raised in a glass — and Monday was an invited guest at the White House.

Top Cheerwine officials are in the nation’s capital to participate in a made-in-America showcase put together by the Trump administration. Cliff Ritchie, president of the company, and Joy Ritchie Harper, marketing director, flew to Washington to be part of Monday’s showcase.

Cheerwine held a prominent position in the circle of tables — right next to the podium from which Vice President Mike Pence and President Donald Trump spoke.

A White House news release said Trump hosted the event in a continuation of his efforts to put America first. The ceremony was designed to highlight and celebrate American-made products and encourage other companies to manufacture their products in the United States.

During his short speech, the president spoke of the importance of reviving the manufacturing industry and his hope of filling the market with goods “made in America.”

“We’re going to start doing that again. We’re going to put that brand on our product — because it means it’s the best,” Trump said.

Cheerwine was selected to represent North Carolina. The Post reached out to the White House for comment but did not receive an answer before press time.

By offering each state the opportunity to showcase a product made in the state, the news release said, Trump was reaffirming his administration’s commitment to encourage manufacturing that will further stimulate the economy and create jobs.

“We want to build, create and grow more products in our country, using American labor, American goods and American grit. When we purchase products made in the U.S.A., the profits stay here, the revenue stays here and the jobs — maybe most importantly of all — they stay right here in the U.S.A.,” he said.

Before the president spoke, a live-stream of the event showed the president walking from display to display, pausing to shake hands with representatives and exchanging a few words.

Ritchie can be seen shaking hands with the president before his address.

A phone call to Cheerwine for comment was not returned by press time.

The showcase is part of a weeklong focus by the White House on U.S. manufacturing.

“For too long, our government has forgotten the American worker. Their interests were pushed aside for global projects and their wealth was taken from the communities and shipped overseas,” said White House director of media affairs Helen Aguirre Ferre. “Under the leadership of President Donald Trump, not only will the American worker never be forgotten but they will be championed.”

Trump pledged to bring back U.S. manufacturing jobs lost to technological innovation and outsourcing by scaling back regulations and renegotiating trade deals.

It’s an issue that resonates with the president’s base, and one that senior aides sought to highlight Sunday as the president spent the weekend attending the U.S. Women’s Open golf championship at a course he owns.