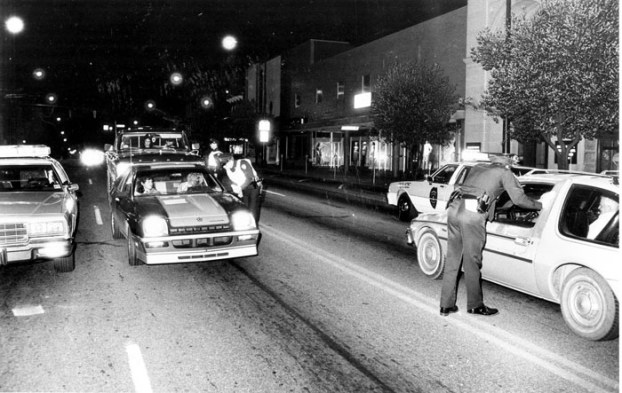 Yesterday: When the downtown cruising law went into effect

Believe it or not, it has been 30 years since cruising was a major downtown issue, and this photograph from the Salisbury Post files shows the cruising law’s first night of enforcement, April 20, 1987. Salisbury Police are conducting a license check on Main Street and handing out brochures. No citations were handed out that night — only warnings —  and the brochures were titled, ‘Cruising in Salisbury.’ Then-Police Chief Jeff Jacobs said the warnings would continue until May 1, after which tickets for violators of the cruising ordinance would cost $25. On the weekend nights leading into the first night of enforcement, which was a Monday, the downtown was packed with cruisers, many of whom carried signs of protest against the Salisbury City Council’s new no-cruising law and a Main Street parking ban. The new law, which remains in effect, said a motorist could not drive past a traffic control point in the downtown more than two times within a two-hour period between 6 p.m. and 4 a.m. In those days, a nighttime parking ban also was placed on Main Street from 9 p.m. to 4 a.m.

Yesterday: A 1953 photo of Salisbury Hardware and Furniture Co.

Melissa Eller provided this photograph to the Salisbury Post because William Vance Eller is pictured with other employees and principals... read more