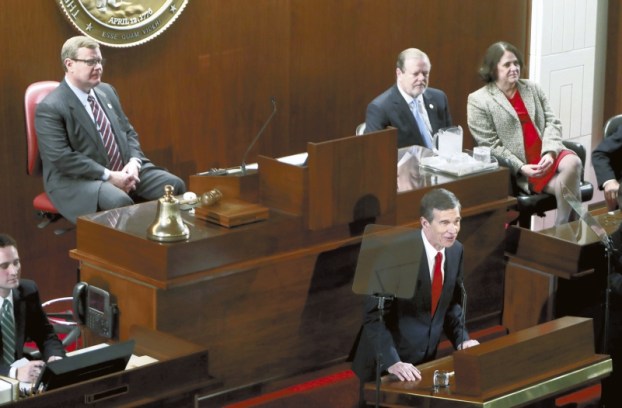 North Carolina Gov. Roy Cooper, front right, delivers his first State of the State address to a joint session of the state legislature in the House chamber of the Legislative Building in Raleigh on March 13, 2017. Speaker of the House Tim Moore, top left, and Sen. Phil Berger, president pro tem, second from top right, look on. (Chris Seward/The News & Observer via AP)

RALEIGH — The fiscal crises in two states have liberals and conservatives chortling in glee.

Liberal Connecticut and conservative Kansas are both in fiscal trouble, so conservatives point northward and liberals midwestward and say, “We told you that doesn’t work.”

Looking at the two states, I say they are living proof of my brilliant treatise, first published in 2014 but mentioned many times before while I was drinking beer, on the key difference between liberals and conservatives. Here it is again:

“Liberals think everything should be free. Conservatives don’t want to pay for anything.”

As a Connecticut native and annual visitor to relatives, I can testify that a lot of stuff is free there, gratis of the government, except photocopies of your grandparents’ marriage license. That costs $20.

In Kansas, the conservatives decided to cut taxes down dramatically figuring that roads, schools, prisons and other stuff could be run without much in state funds because low taxes would mean so much prosperity.

Neither approach has worked. And my mother could have told them neither would.

She had only a ninth-grade education but she was good enough at arithmetic to work as a bank bookkeeper. She had a fairly simply philosophy when it came to money: “You gotta pay your bills.”

And to pay your bills, you have to know these things: What you can’t live without, what you have now that you can live without, and how are you going to pay for the necessary stuff if your income suddenly stops or falls drastically.

I’ll say this for North Carolina: In all the years I’ve lived here, the politicians of both parties have always had a plan for answering those three questions. And those questions are important this week after release of the legislative staff analysis saying there is a $1 billion structural deficit in the recently passed 2017-19 budget.

A structural deficit is calculated using current spending and income, and then forecasting growth. If you’re making $100 a week and spending it all, and it’s more likely your costs will rise faster than your salary, you have a structural deficit.

For decades, Democrats cushioned the budget with empty jobs for which no one got paid. The money sat unspent in the state treasury, keeping spending below the authorized budget. When the year was out, the savings paid for buildings and other one-time expenses.

Republicans prefer to put money in the so-called Rainy Day Fund, saying it can cover any downturn in revenues.

For years, independent analysts have been warning about structural deficits in North Carolina. Every time the chickens have come home to roost, the legislature responded. The Democrats would cut some and raise taxes.

If the legislative staff is right, Republicans will get their first experience dealing with a structural deficit either next year or the following year. Various legislators, quoted in the press last week, said they had reserves to deal with any shortages but they expected the economy to produce surpluses.

If the economy doesn’t produce the obvious balance between spending and revenues, the question becomes whether the Republicans will dip into those reserves. They know it is not good fiscal management to use one-time money, which is what savings are, for ongoing expenses like teacher salaries. And they also prefer to cut spending.

In 2011, when Republicans first had the responsibility for balancing a troubled budget, they cut, cut, cut. Can and will they do so in 2019, if necessary?

My mother would tell them that no matter what, they have to pay their bills.

My Turn: Beyond the riots