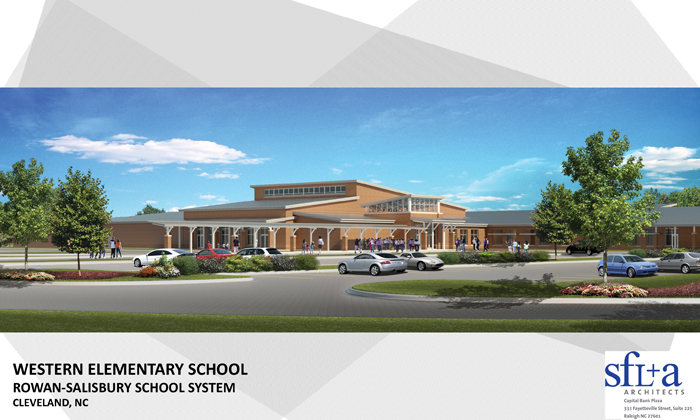 During a called meeting, the county commissioners approved the largest funding source for the project — a $27.5 million loan.

The loan proposal approved Monday comes from SunTrust bank. It will be repaid over 12 years and comes with interest rates of 2.21 percent and 2.29 percent, depending on which prepayment option the county selects.

A public hearing preceded the vote to approve the loan, but no one spoke for or against the proposal. The commissioners did not spend a lot of time discussing the matter Monday.

The loan is required by a settlement agreement between Rowan-Salisbury Schools and the county.

Finance Director Leslie Heidrick said the SunTrust loan fits well within the county’s budget. She said the loan comes with a “great rate.”

The loan will provide most of the money needed to pay for the elementary school in Cleveland that will combine the existing Woodleaf and Cleveland elementary schools. Roughly $335,000 is expected to be paid for with money from the Rowan-Salisbury school system’s fund balance.

Now, the loan needs approval from the state’s Local Government Commission. Heidrick says she expects the commission’s approval during its meeting Aug. 1. The county should complete the loan by Aug. 3, she said, and could start drawing some of the $27.5 million almost immediately.

Rowan County will also start paying bills almost immediately. Heidrick told the commissioners there is more than $1.5 million in invoices that include planning and land acquisition costs.

In addition to approving the loan proposal Monday, the Rowan County commissioners approved a packet of related documents. Those documents accomplish various administrative matters, including transferring a deed for the new school from the Rowan-Salisbury Board of Education to county government and leasing the facility back to the school system for a total of $100.

Rowan-Salisbury Schools aims to open the western elementary school by December 2018. It will be built on a site adjacent to the current Cleveland Elementary School.

Load restrictions will lift on completion of new culvert…