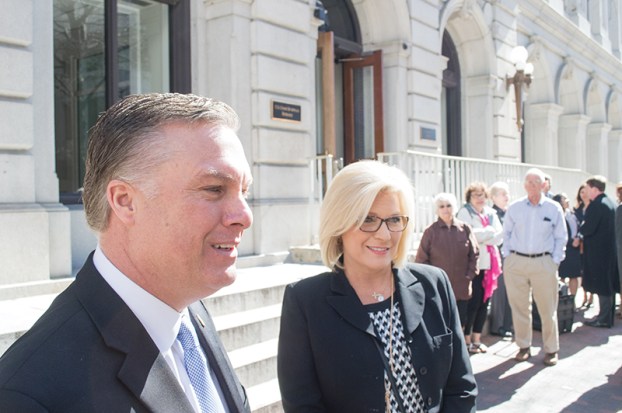 Michigan case could affect next step in Rowan prayer lawsuit

SALISBURY — If Rowan County commissioners decide to appeal Friday’s court ruling, the outcome of their prayer lawsuit could be affected by a nearly identical case in Michigan.

Now, Rowan County commissioners are faced with a decision — appeal to the Supreme Court or accept the most recent ruling.

University of North Carolina law professor Bill Marshall said the court might not choose to hear Rowan County’s case because of the relatively recent decision in Greece v. Galloway, which has been mentioned frequently in Rowan County’s case. The case, decided in 2014, focused on whether a town in New York could allow volunteer chaplains to open meetings with a prayer.

The author of the 4th Circuit’s majority opinion — Judge J. Harvie Wilkinson —  is another reason the court could decline to hear the case, Marshall said.

“Judge Wilkinson is one of the most respected jurists in the country,” Marshall said. “He was at the top of everybody’s list as the Republican nominee to the Supreme Court. He is very thoughtful, very scholarly and very distinguished. I think the court might give more deference to him than they might give to any other judge.”

In one scenario, however, Rowan County’s chances of being heard in the U.S. Supreme Court may increase. That scenario involves two federal circuit courts issuing different rulings about the same matter — a circuit split.

“We have no way of knowing, but if the 6th Circuit reaches the opposite decision on a nearly identical legal matter — one court of appeals ruling one way and a different court ruling a different way — that would be a major factor,” said Mike Berry, an attorney at the First Liberty Institute.

Berry’s organization is listed as co-counsel on the 4th Circuit and 6th Circuit cases.

Catawba College political professor Michael Bitzer said a circuit split would be more than just a factor. Bitzer says it would increase the chances of Rowan County’s case being accepted by the Supreme Court.

“It’s much more likely that the Supreme Court would take one, if not both, when you have a circuit split,” Bitzer said.

County commissioners are watching the 6th Circuit case, too.

“I’m not a legal expert, but we are probably going to have a split decision,” County Commissioner Mike Caskey said.

First, however, county commissioners need to vote to appeal the decision, and there’s significant momentum behind that choice.

“I assume they don’t like this decision, and if you don’t like the decision you don’t have any choices but to appeal,” said University of Richmond law professor Carl Tobias. “They could say, ‘well, we gave it our best shot and we don’t want to throw any more money or time at it,’ but I don’t think that’s likely.”

So far, costs associated with the prayer lawsuit have been relatively limited. The National Center of Life and Liberty represents Rowan County at no cost. Meanwhile, the ACLU of North Carolina represents a trio of Rowan County residents who filed the original lawsuit contesting the commissioners’ prayers.

If commissioners decide to appeal, Tobias predicts there will be four votes among Supreme Court justices to hear the case, which is the number required.

“They may not want to leap into this issue again. You’ve got the issue of percolation, and they may want to see multiple decisions, to see what other courts do,” Tobias said. “But my bet is that there are four votes.”

The possibility of appealing to the U.S. Supreme Court already has one prominent supporter — Rep. Richard Hudson, R-8. Shortly after the 4th Circuit’s ruling on Friday, Hudson encouraged Rowan County commissioners to appeal.

“I am incredibly disappointed with today’s decision that tramples on our First Amendment rights to religious liberty and freedom of speech,” Hudson said in an emailed statement. “I encourage Rowan County to take this matter to the Supreme Court. I will continue to stand with them to protect religious liberty and defend our right to pray.”