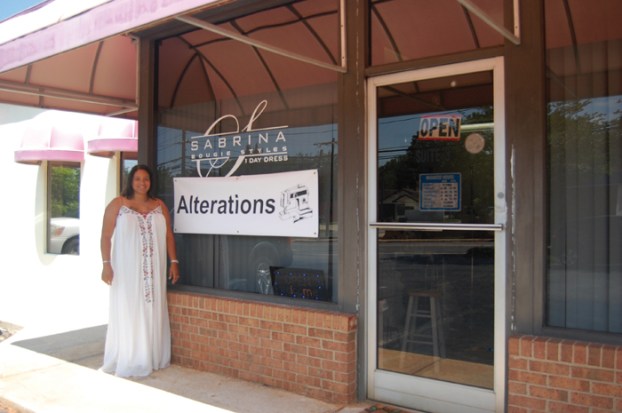 “It doesn’t ask questions, it doesn’t get mad at you. It’s just you and the machine,” she said.

More than most, working with something that doesn’t talk back to her is important. That’s because, without hearing aids, Harris is legally deaf.

“With me being hearing impaired, it doesn’t ask a lot of me. As long as I know to set it and check my needle and thread it, it’s good to go,” she said.

Harris discovered sewing long before it became her business. But she didn’t think of it as a way to make money until she had a chance meeting at a fashion show.

“A young lady needed a dress to wear…and she was curvy, so it was going to be hard for her to find a last-minute dress to fit her body type. And so I made the dress and she wore it and she got rave reviews. And she was like, ‘You’re in the wrong business.’”

Harris said that, until that encounter, sewing had only been a hobby. She never thought that she would be able to use it to help other people.

But, from that point on, she had a vision of owning her own shop.

The path to getting that shop — located in the 1008 South Main Street shopping center, next to South Main Barber Shop — was a rocky one.

“I had tried it numerous times and failed, being able to have a space. I was in two different locations trying to have a storefront but, because I didn’t know anybody, it was kind of like putting the cart before the horse scenario,” Harris said.

Originally from Charlotte, Harris moved to Salisbury when her husband, Justis, a Salisbury native, got rehired at Freightliner Trucks.

“And so most of my clientele started out in Charlotte because they know me,” Harris said. “And here it was kind of, like, spotty, it was like here and there.”

Then there was the issue of childcare. With a teenage daughter, two small boys and a husband working full-time, she found herself dragging her sons – Justis Jr. and Troy – from place to place as she tried to nail down a permanent location.

Then something happened that changed everything.

“Once they went to HeadStart, that opened up my schedule a little bit where I said, ‘OK, maybe I can try again.’”

Harris said the HeadStart program was very supportive of her, from giving her a discounted rate for extended childcare to giving her chances to use her creativity by making things for the program.

Now, after almost a year of working in her own shop, which she named Sabrina Bougie Styles, Harris said she hopes to grow the business by expanding and hiring more help. Although she’s done a few custom pieces since she’s moved in, she hopes that, with a bigger staff, she can do more.

“That’s what I’m leaning toward, is having a core group of people that we work together. We complete the alterations because alterations pay the bills. And then complete designs for those people who just like to have one-of-a-kind pieces,” she said.

Harris is planning on holding a grand re-opening ceremony this September because, since she’s moved in, she said that she’s mostly built up her client base by word-of-mouth.

“I made it a point to join the Rowan Business Chambers so that I could have a ribbon-cutting to celebrate me being open for a year. And it’s to kind of really announce to the community that I’m here,” Harris said. “It’ll be the official grand opening.”

SALISBURY — The arson of a motor vehicle was reported Thursday, according to the Salisbury Police Department. The car was... read more