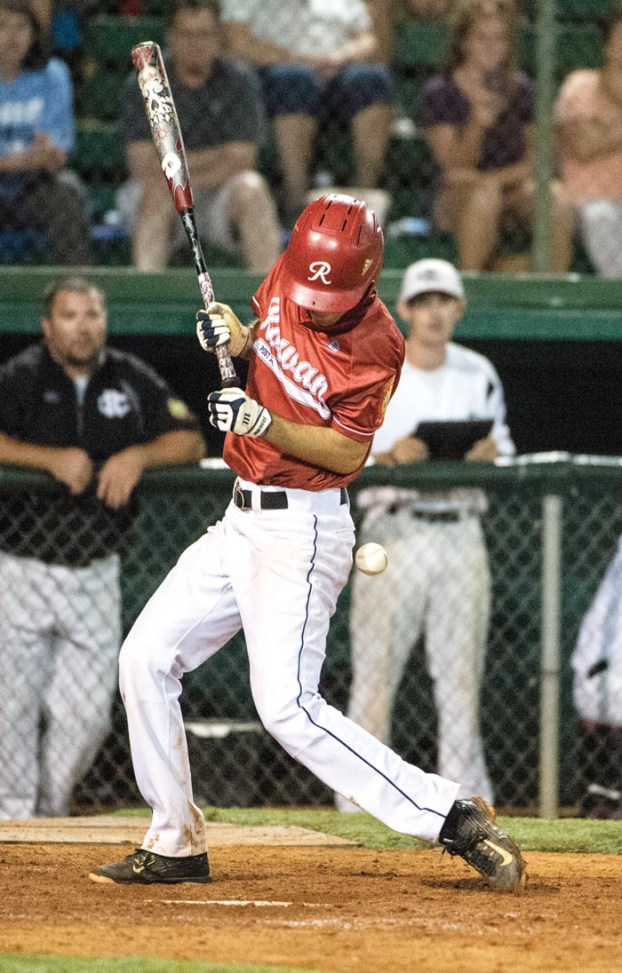 Rowan County's Tanner File is hit by the pitch with the bases loaded for the walk off win 6-5 during game 1 of the Area III American Legion Championship best of 3 game series at Newman Park on the campus of Catawba College on July 10t15th, 2017. PJ Ward-Brown/The Courier-Tribune

Already assured a berth in next weekend’s state championships, Post 342 will zero in on the Area III title after rallying past visiting Randolph County late Saturday night for a 6-5, Game 1 victory.

“It shows we’re still the same team that started off the season, working back from deficits and getting comeback wins,” outfielder Lee Poteat said after Rowan (31-1) scored a pair of unearned runs in the last of the ninth inning and took a one-game lead in the best-of-three series. Game 2 is scheduled tonight at Asheboro’s McCrary Park.

Rowan trailed 5-4 entering the final inning against Randolph’s Cameron Reid, a side-arming right-hander who retired the locals in order in the last of the eighth. Chandler Blackwelder and Henderson Lentz each reached on a Randolph error to open the ninth and a passed ball moved both runners into scoring position with none out.

“That’s how this team is,” winning pitcher Brandon Walton said after throwing a 1-2-3 ninth inning and reaching base four times. “If there’s a job that needs to be done, we’ll get it done. We just never give up.”

Rowan tied the score when Poteat launched a 1-2 curveball deep to deep center field for a sacrifice fly.

“I thought it was off the wall,” he said with a relaxed, post-game smile. “But that was just the adrenaline in me.”

Randolph coach Ronnie Pugh, whose team had won its previous 12 games, then ordered both Walton and Trevor Atwood walked intentionally, loading the bases with one away.

“We didn’t give up and we didn’t panic,” winning coach Jim Gantt said after Rowan extended its winning streak to 13 games. “The errors hurt them, but it wouldn’t have mattered if Brandon Walton hadn’t pitched so well in the top of the ninth. He kept it at one run. You can overcome that.”

After Chandler Lippard chased a third strike for the second out, Rowan’s Tanner File produced the winning run when he was struck on the left elbow with a 1-2 slider.

“(Reid) had thrown me like five sliders in a row,” File said. “I didn’t think he’d throw a fastball there, not after he’d struck me out with a slider my last time up.”

The victory was reminiscent of Rowan’s early-season, 18-game winning streak when it made a habit of falling behind before charging back. “I remember it,” File said with a grin. “Never give up. That’s what we were saying.”

Lost in the shadows was a sturdy performance by Rowan starting pitcher John Owen. The right-hander took a 4-1 lead into the eighth inning before yielding Jaxon Snider’s ground-ball single to left field and Parker Clayton’s double into the right-field corner.

“I think he would have been the winning pitcher if I’d taken him out after seven (innings)” Gantt said after Owen’s no-decision. “He came in the dugout after the seventh and said he felt great and wanted to go back out. I listened to him, but I’m kicking myself for that.”

Owen was spelled by Griffin Myers, who faced only three batters and was victimized by a two-run error. Randolph used a Peyton Williams sac fly and Trevor Marsh’s run-scoring hit against lefty Joe Harrison to go ahead 5-4.

Without alarm, Rowan climbed out of that hole in the ninth.

“It’s kind of what we do best,” Owen said. “We go out there, we grind and we win ballgames.”

NOTES: An early-evening rain shower delay the game’s start until 8:26 p.m. … Randolph (26-8) outhit Rowan, 7-6. Despite committing four errors, the guests doused threats with inning-ending double plays in the third and fourth. … Atwood scored Rowan’s first run on a second-inning error. Lippard’s sac fly gave Post 342 a 2-1 lead in the fifth and Brycen Holshouser’s run-scoring hit made it 3-1 an inning later. …Walton is the 11th Rowan pitcher to win a game this season. … The victory was No. 499 for Gantt. … Right-hander Olen Stamper starts tonight as Rowan goes for the Area III crown.