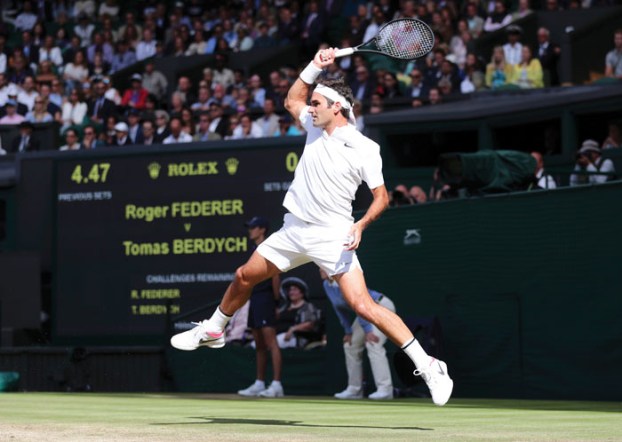 Wimbledon final: Federer goes for No. 8

LONDON (AP) — They love their history around these parts and they love Roger Federer and, above all, they love watching him make history.

Now he stands one victory from an unprecedented eighth Wimbledon men’s singles championship after qualifying for his 11th appearance in the final, breaking a record he already held.

Just weeks from turning 36, and a father of four, Federer continued his resurgent season and unchallenged run through this fortnight at the All England Club by conjuring up just enough brilliance to beat 2010 runner-up Tomas Berdych 7-6 (4), 7-6 (4), 6-4 in the semifinals Friday.

“It’s great, but it doesn’t give me the title quite yet. That’s why I came here this year,” Federer said. “I’m so close now, so I just got to stay focused.”

He has won every set he’s played in six matches, and while he did not exactly dominate against the 11th-seeded Berdych, Federer was never in much trouble. On Sunday, Federer will face 2014 U.S. Open champion Marin Cilic, who reached his first Wimbledon final by eliminating 24th-seeded Sam Querrey of the U.S. 6-7 (6), 6-4, 7-6 (3), 7-5 with the help of 25 aces and some terrific returning.

“This is his home court,” Cilic said about Federer, “(the) place where he feels the best and knows that he can play the best game.”

Since equaling Pete Sampras and William Renshaw (who played in the 1880s) with a seventh trophy at Wimbledon in 2012, Federer has come this close before to No. 8. But he lost to Novak Djokovic in the 2014 and 2015 finals.

Federer would be the oldest man to win Wimbledon in the Open era, which dates to 1968; as it is, he’s the oldest finalist since Ken Rosewall was 39 in 1974.

“I mean, I don’t see anything that would indicate really Roger is getting older or anything like that,” said Berdych, who wore sneakers with a silhouette of Djokovic’s face on the tongue because his own usual shoes were uncomfortable. “He’s just proving his greatness in our sport.”

Also noteworthy: This is Federer’s second major final of 2017. After losing in the Wimbledon semifinals last year, he took the rest of 2016 off to let his surgically repaired left knee heal. He came back fit and refreshed and won the Australian Open in January for his record-extending 18th Grand Slam title and first anywhere in 4½ years.

“Giving your body rest from time to time is a good thing, as we see now,” Federer said. “And I’m happy it’s paying off because for a second, of course, there is doubts there that maybe one day you’ll never be able to come back and play a match on Centre Court at Wimbledon. But it happened, and it’s happened many, many times this week.”

And most of the 15,000 or so people in attendance were pulling for him. That was evident throughout Friday, from the cries of “Go, Roger!” to the roars of approval and thunderous applause that greeted some of his best efforts on a day when he was not necessarily at his vintage, wondrous best.

The down-the-line forehand passing winner that landed right on the opposite baseline in the second set, leaving Berdych slumping his shoulders. Or the no-look, flicked backhand winner several games later that not many players would even try, let alone manage to do.

“I was able to come up with the goods when it mattered,” Federer said.

The No. 7-seeded Cilic was not able to do that in the opening tiebreaker against Querrey, the first man from the U.S. in any major semifinals since 2009.

At 6-all, Cilic seemed distracted by a delay of a couple of minutes when a spectator who appeared to feel ill was helped from her seat and out of the stands. When action resumed, Cilic flubbed two backhands to cede the set.

But from there, he steadied, handling Querrey’s big serves rather well. A trio of superb returns earned a key break in the fourth set, the last a massive forehand off a 79 mph (127 kph) second serve that drew a shanked backhand and a yell of “No!” from Querrey.

The next test for Cilic is the toughest of all: beating Federer at Centre Court. They met in the Wimbledon quarterfinals last year, when Cilic took the opening two sets and even held a match point before Federer came all the way back to win, improving to 6-1 head-to-head.

That lone win for Cilic was by straight sets in the semifinals in New York three years ago, on the way to his one major title.

“I still know that it’s a big mountain to climb,” Cilic said. “Roger is playing maybe (some) of his best tennis of his career at the moment.”