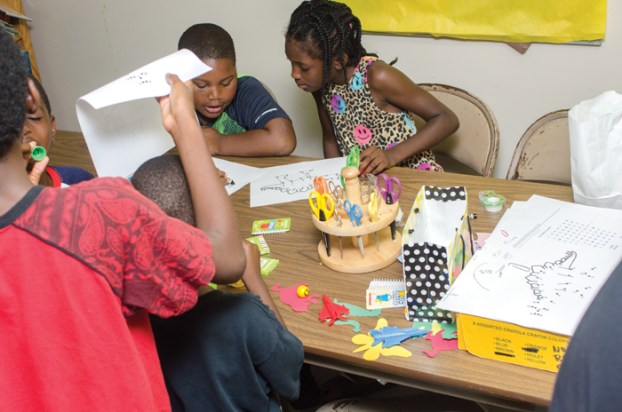 Kids connect the dots of pictures of dinosaurs after learning about Fossils at a Summer Feeding Program at Brookview Apartments in Salisbury on July 13, 2017. KRISTI CRAVEN/ SALISBURY POST

SALISBURY — The inside of the apartment is sweltering, but it doesn’t stop the kids from coming. They’ve crowded into the small space in Brookview Apartments and call out answers to questions.

Helen Peacock, a tutor with the Rowan County Literacy Council, is quizzing them about dinosaurs while the children finish up a bagged lunch or take turns dropping plastic dinosaurs into a glass jar — part of a game Peacock’s devised.

The half hour lesson, immediately following a food drop from the local school system’s Summer Feeding Program, is part of a new pilot program for the Literacy Council.

Laurel Harry, program coordinator with the council, said the sessions serve several purposes — including stemming the tide of summer slide.

“We want to do whatever we can to keep these kids on track during the summer so that they can go into the school year not having lost any ground,” she said.

Thanks to a partnership with the Salisbury Housing Authority, the council launched sessions at two locations: Brookview and Lafayette Street. Tutors come to each location at least once a week to work on building vocabulary and reading skills.

It’s new territory for the literacy council in more ways than one.

Not only is it a pilot program, but it’s the first official programming the council has that focuses on children. Until the school year ended, tutors only worked with those 16 and older.

“This is breaking ground for us,” Peacock said.

Initially, the pilot program would help students hone writing skills. But Harry said they quickly realized they’d need something more flexible. So called “open sites” for the feeding program welcome any child in the area between the ages of 3 and 18. Though some who come are younger.

“You know, if you’ve got two year olds in there one day, it’s a little difficult to talk about parts of speech,” Harry said.

Open sites also have attendance rates that fluctuate. In the three or so weeks since she started, Peacock has taught as few as seven students, and as many as 21.

She tries to include a lot of variety in her lessons, focusing on building vocabulary. Each session has a theme vocabulary word — like “fossil” or “barracuda.” Peacock reads a book, and plans activities that center around each theme. Students might spend time looking at and naming different kinds of shells, or completing ABC connect-the-dots of a stegosaurus. There’s usually a small game and some prizes, as well. When they leave, they take games, worksheets or other at-home activities with them.

Harry and others at the council strive to inject a bit of fun into each session.

“We also want to make them feel that reading is fun, and valuable and something that they want to do — not just have to do,” Harry said.

Peacock said the students have been excited about the lessons, and often return for forgotten paperwork.

“They want to continue to learn,” she said. “I really and truly believe that.”

But the rapport she builds with the students adds another layer to each session.

“They seem to appreciate it. …I think it’s just that someone cares enough to come,” she said.

The partnership came from a conversation between Literacy Council Executive Director K.C. Scott and Salisbury Housing Authority Director Sam Foust. Scott mentioned the council’s desire to reach out to younger students, and Foust told her about the feeding program.

“We decided it was a great opportunity since they’re coming to eat anyway,” Harry said.

Foust said that the locations were chosen because both have indoor spaces that would shield children and tutors from the hot summer sun. Next summer, he hopes that they’ll be able to expand the program to all of the housing authority’s family communities.

And it’s the Literacy Council’s hope that when school starts up again this fall, programming will be able to stretch into the schools, Harry said.