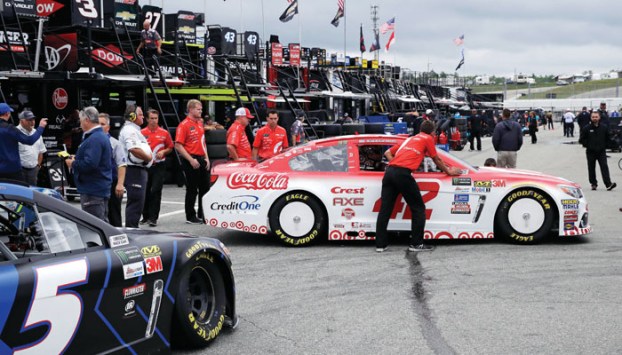 The crew of driver Kyle Larson pushes his car into an inspection stall after qualifying for Sunday's NASCAR Cup auto race at New Hampshire Motor Speedway in Loudon, N.H., Friday, July 14, 2017. Larson was stripped of his pole and had his winning time tossed out after failing inspection for an infraction. He will start at the rear of the field in Sunday's race. (AP Photo/Charles Krupa)

LOUDON, N.H. (AP) — Kyle Larson has made a habit of flunking NASCAR inspection.

Knocked from the top of the points standings this week because of an inspection failure, Larson was stripped of his pole Friday at New Hampshire Motor Speedway and had his winning time tossed out for yet another infraction. He will start at the rear of the field in Sunday’s Cup race.

Martin Truex Jr. will lead the field to green for the first time this season.

“Not the way we wanted to get our first pole of the year but looking forward to starting up front,” Truex said.

Larson’s time was disallowed because of an unapproved rear deck fin lid. NASCAR said there would be no additional penalties.

He had raced to the top of the field without his suspended crew chief, turning a lap of 133.324 mph to win his fourth pole of the season. Larson’s team was penalized 35 points this week by NASCAR, erasing what had been a one-point advantage over Truex in the driver standings. Crew chief Chad Johnston was suspended for three races because of a rear brake cooling assembly that did not meet standards.

“I wish I could have him on the box on Sunday, but we will be strong these next few weeks,” Larson said.

“I know nothing about race cars,” Larson said. “I don’t honestly know what it was that got us in trouble. Yeah, a big penalty so it must have been something important in their eyes.”

NASCAR’s eyes got bigger at New Hampshire — though Larson did pass pre-qualifying inspection.

Larson also started in the rear because of inspection issues at Kentucky Speedway.

“It’s really cool to get the pole the first week back after the penalty,” he said.

Truex has the pole and the rest of the field moved up a spot. Jimmie Johnson, Matt Kenseth, Jamie McMurray and Kasey Kahne completed the top five.

Johnson, the seven-time Cup champion, starts in the top five for the first time this season.

Kenseth had a solid round just days after it was announced he would be out at Joe Gibbs Racing at the end of the season. Furniture Row Racing driver Erik Jones, who will replace Kenseth, starts seventh. Kyle Busch starts eighth and Denny Hamlin ninth to give JGR three drivers in the top 10.

Kenseth, Busch and Hamlin are again all chasing Truex. Truex has three of wins driving for Furniture Row — which shares a technical alliance with JGR — while the Gibbs drivers remain winless.

“It’s the biggest question of the universe right now, probably, which is why the 78 is outperforming the house cars, so we’re just as confused and disgruntled by it as probably others,” Busch said. “I wish I had a theory. I’ve had probably 10 theories since they’ve joined us and none of them are true, so I’m done with theories.”

With Jones moving on, Furniture Row owner Barney Visser has not decided if the team will field two cars next season.

But the same week he was given a pink slip by Joe Gibbs Racing, Kenseth hit the road for a Metallica concert instead of pounding the pavement to find a ride in 2018.

“Actually made me feel 20 again for about four hours, which was pretty fun,” Kenseth said.

If Kenseth actually was 20, he’d be an in-demand driver for a Cup Series rapidly undergoing a changing of the guard. Young is cool. And for a sport desperately angling to hook a new generation of fans, 20-something drivers such as Chase Elliott, Kyle Larson and Erik Jones could lead the charge into the next decade and beyond. Some of that evolution comes at the expense of veteran drivers such as Kenseth, the 2003 Cup champion and a two-time Daytona 500 champion, who got the official news this week he was out at JGR at the end of the season.

The 21-year-old Jones will take Kenseth’s job in the No. 20 Toyota. Jones is on a one-year loaner contract to Gibbs’ sister team Furniture Row Racing, and Gibbs had to put Jones somewhere in 2018.

Kenseth’s fate had been in limbo — though it seemed obvious Jones was being groomed for the ride — and Gibbs made the transaction complete, leaving the 45-year-old driver without a car next year.

“I’m just glad they finally put it out so I don’t have to pretend anymore,” Kenseth said at New Hampshire Motor Speedway. “Everybody can ask you about it, everybody can move on and get back to racing.”

Kenseth, who qualified third at New Hampshire, said Friday he had no hard feelings toward the organization and has no concerns about his future. He also has no timetable for a decision but there are few options.

The best bet could be a one-year landing spot at Hendrick Motorsports driving the No. 88 Chevrolet. Dale Earnhardt Jr.’s ride will be open once he retires at the end of the season. Team owner Rick Hendrick has promising prospect William Byron, a 19-year-old Xfinity Series driver, and could consider Alex Bowman following a solid stint subbing last season for the injured Earnhardt.

Seven-time champion Jimmie Johnson said sponsorship dollars would likely dictate who gets the coveted ride. Johnson, who will have a vote on his new teammate, also said Kenseth has the resume that will earn him a ride somewhere next season.

“Matt’s just too good,” he said. “The guy can win races and championships and that won’t be overlooked. But I do feel Matt’s at a point in his career where he just won’t take any ride.”

Kenseth has won 16 races over five seasons with JGR and is NASCAR’s oldest full-time driver. He is the veteran at Gibbs, which has 2015 champion Kyle Busch, Daytona 500 winner Denny Hamlin and reigning Xfinity Series champion Daniel Suarez. Kenseth, 11th in the standings in his 18th Cup season, said he knew for about a year he could be on the way out at JGR.

“I feel like we did a lot of great things,” Kenseth said. “I don’t think there’s anything to be bitter about or feel bad about. We’re both living up to the agreements we made.”

“I hope to race next year,” Kenseth said. “I still enjoy racing. I still feel like I could be an asset to somebody, so I hope so.”

His other options include a bunch of maybes: Hendrick could cut ties with underachieving Kasey Kahne in the No. 5 and Stewart-Haas Racing may have two openings if Danica Patrick and Kurt Busch do not return. NASCAR has already lost veteran stars Tony Stewart, Jeff Gordon and Carl Edwards over the last three seasons and the popular Earnhardt is on his way out.

That includes Larson, a dirt tracker from California who will race anything at any time. Larson turned the fastest qualifying lap for Sunday’s race at New Hampshire before his time was disallowed for an inspection failure.

“A distant second,” Harvick said. “Dirt racing is great, but they don’t have the fanbase that a NASCAR-type fanbase does to help elevate him because most of those people aren’t going to go to a NASCAR race.”

Kenseth was once considered one of NASCAR’s hottest young drivers. He’s now riding out the string, hoping for a win and a strong showing down the stretch to showcase to other teams he still has something left for next year.

“We’re both going to work as hard as we can to win races, win a championship for JGR,” he said. “Next year doesn’t affect anything for this year at all. It really doesn’t.”

Braves start second half with win over Diamondbacks