Campers learn about character and leadership at Royal Giants Park 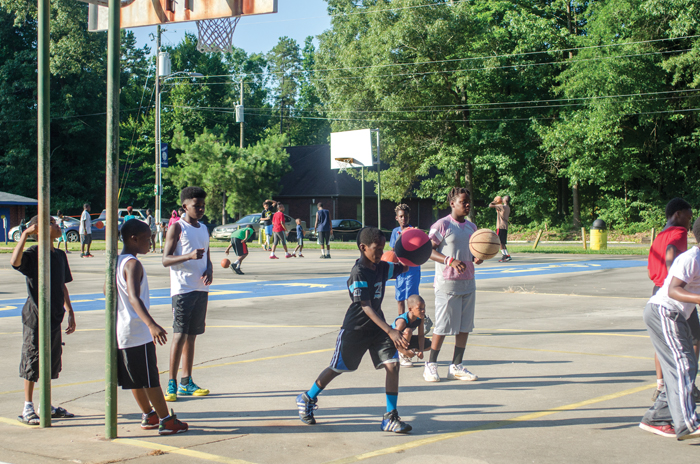 EAST SPENCER — As the sun began to climb into the sky Friday morning, children filled the playground and basketball court of Royal Giants Park in East Spencer — ready for another great day at camp.

The Royal Giants Park camp is free to East Spencer residents and provides children ages 5 through 13 with the opportunity to learn about leadership and good character.

“Because the camp is free, people think it’s just for poor kids, but it’s a good camp for all young people,” said Andrew Mitchell, the camp’s director. “It gives young people the opportunity to develop to be better people.”

The camp — which has continued since 2014 — started July 5 and lasts until Aug. 4, when it will conclude with a trip to Emerald Pointe Water Park.

Each day, children arrive at the park between 7:30 and 8 a.m and leave about 1 p.m. They are provided with breakfast, lunch and about three snacks each day.

There have been more than 50 campers each day this week, Mitchell said, adding that the number has only risen since the initial count of 39 on the first day.

Mitchell has arranged for a variety of activities for the campers such as speakers, trips to the movies each Tuesday, bowling outings each Wednesday, several YMCA visits, a trip to Lazy 5 Ranch as well as various on-site activities.

In addition, the campers are taught about having good character, manners and leadership skills.

“We have a word of the day — courage was the word for yesterday and character is the word today — and we do about 20 minutes of reading each day.” said Mitchell. “They have fun, but they are growing into being great people. We want them to know that even when things are hard, they have to be courageous and courteous.”

Mitchell also incorporates his strong faith into what the campers learn each day by teaching them to “turn to their higher power” instead of giving up when they face challenges — something he has done multiple times over the years when money for the camp ran low, he said.

“If it’s God’s will, it always works out,” Mitchell said. “We can’t give a lot, but we can give them encouragement and let them know they are loved.”

The children seemed to enjoy participating in the camp just as much as Mitchell enjoys directing it.

“It’s fun! They help us and make us be great,” said Mikayla Ortiz, a student at North Rowan Elementary School. “I really like getting to play with other kids, and I can express myself here.”

“I like the counselors because they listen to us and respect us,” said Sydarius Truesdale, a sixth-grader at North Rowan Middle School.

Whether it was learning about teamwork through a quick game of kickball or having character traits instilled through their word-of-the-day, fun, learning and leadership all seemed to go hand-in-hand at the Royal Giants Park Camp.