The ballad of Bonnie and Floyd: He couldn’t resist the girl from ‘in town’ 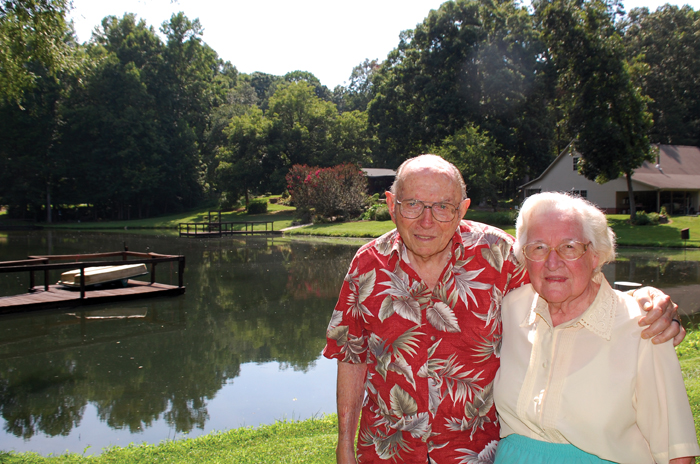 SALISBURY — A breeze carried the crystal-clear notes from the direction of St. Paul’s Lutheran Church. They floated across the pond and into the sunroom where Bonnie and Floyd Bost spend a lot of their time.

Bonnie heard the songs first. But they didn’t make sense. St. Paul’s didn’t have chimes — at least none that worked and sounded this beautiful. Floyd heard them, too.

Daughter Karen Deal couldn’t keep the secret any longer. She knew her husband, Tim, was at the church, helping with the installation of the new chimes.

The family and church members had planned to surprise the Bosts later.

“That’s your anniversary gift from us,” Karen told her parents.

Tears welled up in Bonnie’s eyes as Karen explained how the new chimes could be programmed to play hundreds of songs.

The Rev. Floyd and Bonnie Edwards Bost have been married 70 years. July 20 is the anniversary date, and the chimes will be dedicated in their honor during the Sunday service at St. Paul’s on July 23.

But so much for any surprise.

Floyd Bost served as St. Paul’s Lutheran Church’s pastor — and Bonnie as first lady — for 18 years. After Floyd retired from the ministry and his last call 20 some years ago, they settled close to St. Paul’s in a house they had moved to this spot and remodeled over a period of several years.

That house sits on a family compound along St. Paul’s Lutheran Church Road. A nice fishing pond separates Floyd and Bonnie’s house from Tim and Karen’s place, and the Bosts live between the pond and son Dana’s home.

Bonnie is an expert at sewing and crocheting. Floyd provided a large glass cabinet in the hallway in which to display her quilts. Until arthritis set in, Floyd golfed, often playing with his brother Gene, who also is a retired pastor.

Once they retired, Floyd and Bonnie traveled across the country in their RV. The Rev. C.P. Fisher and his wife were frequent traveling companions as they also journeyed to places such as Europe, Israel, Mexico and Hawaii.

The whole family went to Alaska.

“I have enjoyed my life, that’s for sure,” Bonnie says.

For the past two years, Floyd has been dealing with bladder cancer, and he credits Bonnie for looking after him. Floyd and Bonnie Bost in their recent portrait for the membership directory at St. Paul’s Lutheran Church.

Between the two, Floyd is more of the talker, even close to a country humorist. He grew up in Holland and Grace Bost’s family of 13 children in the farthest reaches of southwestern Rowan County.

Holland Bost used to call their place “Plumb-Nearly.” It was plumb out of town and nearly out of the county. The Bost home stood a mile off the main road, and Floyd used to walk five miles one way to Bonnie’s house in their courting days.

She was a beautiful redhead, Floyd says. He also claims she grew up “in town,” a full-fledged city girl.

Bonnie laughs at that.

“I had a neighbor,” she says, clarifying things.

The families of Bonnie and Floyd were friends with each other, and the story goes — Floyd is sometimes skeptical — that he and Bonnie were plumped down on the same bed together when they were babies. (Floyd is nine months older.)

But to say they have known each other pretty much their whole lives is true. Somehow, Floyd was held back in elementary school, and Bonnie ended up a year ahead of him as they attended the one-room Unity School first, then Enochville Elementary and finally Landis High School.

“She’s a year smarter than I am,” Floyd likes to say.

Floyd knew by the fifth grade he wanted to be a pastor, “but nobody helped to prepare me for it.”

The couple married at Unity United Methodist Church the summer immediately following Bonnie’s graduation from Landis High in 1947, even though Floyd still had a year to go.

Bonnie secured a job in the billing department at Cannon Mills, and the couple lived with Bonnie’s parents a year and then rented a room at her grandmother’s house. For a honeymoon, the Bosts traveled to one of Floyd’s brothers’ home in Concord.

Floyd supplemented their early income by getting a job in the postal department at Cannon Mills.

“Then I don’t know what made me do such a dumb thing, but I decided to go to college,” he says.

With $128 in savings, the couple moved to Newberry College in South Carolina. Bonnie took a job with the local Belk store, and Floyd found work stamping tobacco while attending college full time. He studied philosophy and ethics.

“To add to the stupidity,” Floyd says, “we decided to have a child that last year.”

Daughter Karen was born in 1952, Floyd graduated from Newberry in 1953, and he then enrolled in the Lutheran Theological Southern Seminary in Columbia, South Carolina, for three more years.

They lived in a three-room family dormitory, but for two summers Floyd had three-month internships — first at a Lutheran church in Richfield, then in Lincolnton.

His first call came at Immanuel Lutheran Church in Rockwell, where he served three years, followed by a seven-year stint at Christ Lutheran in Fairfax, Virginia. The couple’s second daughter, Wanda, who now lives in Owingsville, Kentucky, was born while they were at Immanuel.

When the Bosts arrived in Fairfax, their congregation was still meeting  for Sunday services in a high school. During Floyd’s tenure there, he built his first church. The couple also had their third child, son Dana.

Floyd and Bonnie’s next big move came in 1964 when they returned to Rowan County and Floyd became pastor of St. Paul’s Lutheran.

Over the course of 18 years, Floyd would baptize 262 and confirm 518 people at St. Paul’s as membership flourished.

“It was a good time for us,” Bonnie says.

At every call, the Bost family lived in parsonages. The one for St. Paul’s sat across the road from the church and relied on radiator heat. “That was the coldest house,” Karen recalls.

St. Paul’s once had a big remodeling project while Floyd was pastor. He remembers the hand-wringing among many of the members who were concerned they wouldn’t be able to pay off the $70,000 loan.

Floyd says the note was probably retired in a year.

Floyd and Bonnie routinely visited shut-ins, other churches and clubs with an act featuring “Country Boy Floyd.” You can guess who played the starring role.

“I wasn’t a public speaker,” she says.

Two more pastoral moves were in the cards for the Bosts. In 1982, Floyd took a position at Zion Lutheran in Hickory, mainly because he wanted his children to have the experience of going to a church where he wasn’t the pastor.

“We started having grandchildren and they left,” Karen says in protest.

In Hickory, Floyd oversaw the building of another church. In 1991, the Bosts returned to Rowan County for their final church, Prince of Peace Lutheran on N.C. 152. Through all the years Floyd was serving congregations, Bonnie was right there with him.

“She was as much in ministry as he was,” Karen says.

Retirement came officially in 1995. They immediately joined St. Paul’s Lutheran as members. They added the sunroom, a den and carport to their relocated 100-year-old house and made sure to dig a big fishing pond.

With the sunroom, Floyd has a porch looking over the pond, just as he envisioned his retirement would be. Floyd and Bonnie have six grandchildren and seven great-grandchildren.

The Bosts resist answering the age-old question, the one asking their secret to such a long marriage. Karen thinks it has something to do with the long conversations she could hear her parents having at night in bed, as they discussed their days.

“If they had a disagreement, they talked it out,” Karen says.

The Bosts’ lasting marriage also might have something to do with how Floyd still looks at Bonnie as that beautiful redhead with long curls.

There in the sunroom, he confesses to Bonnie that he saved one of her red curls long ago.

“In my cabinet on the back porch,” Floyd says.

Two surprises in one afternoon — first the chimes, now this. Maybe that’s the secret to 70 years.

July 12, 1967: When a reluctant Salisburian collided with…