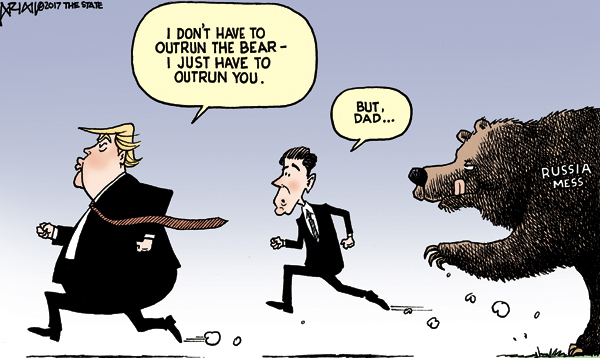 While disinformation may have been used for years, the 2016 campaign was the first time that social media was expertly used in the U.S. by a foreign country to disseminate not only fake news, but also distrust of mainstream media and system of government itself. …

The Republicans’ character assassination of Hillary Clinton goes back seven years when it was obvious she would be the Democratic nominee. (Seven Benghazi hearings? Really?) Together with Republican misinformation and a conspiracy-theorist candidate, Russian meddling absolutely affected the election outcome.

… The longer Trump downplays Russian interference, the more we as a country are at risk. We have serious problems, and we need serious people to address them.

No references to political experts, to historians, nothing to back up your statements. There are just your conceited, uninformed opinions — and badly written, at that. You just had to put in that bit about visiting Russia, probably to validate your claim to being an expert on U.S. government and foreign affairs. Sheer nonsense.

The citizens of this country have had enough of Republicans telling them they are lazy and need to tighten their belts and pull themselves up by their bootstraps. The wealthiest families in this country have taken those bootstraps and hidden them away in their offshore accounts.

If Republicans want to rid themselves of “sugar daddies,” then they need only to look in the mirror, stop providing their billionaire friends with corporate welfare and put that money where their mouth is —keep those campaign promises of making America great.

Andrew Poston, can you say gerrymander? I saw the voter obstruction firsthand, here in The Bathroom State.

I am not a PhD or MD. I am smart enough to know Donald Trump is a con man and a pathological liar. Trump is very good at both.

Are you saying aid workers are also trying to influence foreign governments? I find that hard to believe.

Even if that were true, does that make the Russian collusion in our 2016 election somehow OK? There’s no excuse for Russia’s attack on our country — especially the “everybody does it” one.

This is propaganda in the worse way — delusional, to be exact. Why are you talking about what Clinton did or didn’t do when it has no bearing on what happened? Comey said emphatically that Russia did have some tampering with U.S. election process, and he is a reliable source.

About the only thing that was said correctly in this article is that Trump needs to stop tweeting.

“The citizens of this country need to prepare for more belt tightening and appreciate that deregulation frees their creativity.”

I.e., if you’re poor, get ready for the NCGOP to screw you over. And please thank them for it.

The Office of the Director of National Intelligence

The Federal Bureau of Investigation

All said Russia orchestrated hacking attacks during the presidential election, but this retired Salisbury doctor says differently. Oh, so it must be true.

The article seems even more preposterous now in light of the direct evidence we have in the form of e-mails. How ironic that Donald Trump Jr. did arrange a high-level meeting with someone he presumed to be a “Russian government official” for the express purpose of obtaining sensitive information that could damage Hillary Clinton.

The meeting, which was also attended by Jared Kushner and Paul Manafort, took place in Trump Tower, yet no one who attended the meeting had any recollection of it for the past 10 months and Kushner failed to disclose it when applying for his security clearance. Somehow, we are also to believe this all occurred unbeknownst to Trump Sr., who was just feet away. …

The Trump Jr. e-mails also explicitly state that the Russian government wishes to provide this stolen information to show its support of Trump. In the e-mail, Trump Jr. even suggests that the release of this sensitive information would be most impactful in late summer, which coincidentally is when Wikileaks published the stolen DNC and Podesta e-mails.

At one point people like Dr. Fisher will come to the realization that this is not a liberal hoax, but a very serious investigation into the direct assault by Russia, perhaps with the support of the Trump campaign, on the integrity of the 2016 election and our democracy.

Gerrymandering is part of the cancer that keeps the current corrupt, two-party system in power. And those who champion it out of convenience (because their party is currently at its disadvantage), not because they are truly against it, only give lip service to the issue and don’t really want to see it come to an end.

This is Officer Lindley through and through. He and his family are truly the best, most decent people that my family and I have come to know and love now, since his beginning in law enforcement. A true, honest and good human being — the kind of person that many should look up to and learn to be a decent human.

You are truly loved and respected by myself and my family

… Letter: A wish for the president

As much as I disagree with #45 and his crews, I do not wish him any harm. I have enemies who are worse than him … I pray for their deliverance from evil.

My husband and I had the honor of meeting William Peoples when he was at Genesis Skilled Nursing Facility for rehab after a hospital stay. He often spent nearly an hour conversing with my mother whose room was across the hall from his. He was polite, engaging, and he treated everyone with dignity and respect.

The naming of this walkway in his honor is a well-deserved tribute for a person who clearly loved Salisbury and worked hard to make it a better place to live.

Laying aside whether the two definitions of government that he gives are actually characteristic of either side, there is nothing at all exclusive about these definitions. Both could be true and, indeed, neither are complete.

As Hood points out, Frank’s definition could include things that are clearly not governmental, but Hood ignores the weakness of Weber’s definition. An organized crime syndicate, street gang, or terrorist organization may have a monopoly on the use of violence within a given territory, but that does not make them a government. Hood and Weber would argue that such use of violence is not legitimate, but that begs the question. What confers legitimacy?

For Americans, that is laid out in the Declaration of Independence: legitimacy is conferred by consent of the governed. And if the governed consent, through the mechanism of our Republic, then government is not coercive.

Nor, for that matter, is it true that governments are the only coercive social institution. Family, clan, tribe and faith are also potentially coercive, and sometimes through violence.

Americans have a definition of the role of government, if not precisely its nature, in the Preamble to the Constitution: “establish Justice, insure domestic Tranquility, provide for the common defence, promote the general Welfare, and secure the Blessings of Liberty to ourselves and our Posterity.”

We can certainly disagree over the extent and means by which our government should achieve these things. But the Preamble starts with “We,” and I propose that it is unAmerican to reject government in its entirety simply because it does not grant primacy to the individual who wants these benefits without cost and obligation, or because one is enamored of the notion that armed standoff is superior to ties of common welfare and destiny.

It is good to see a member of the local bar interested in public service in Raleigh. I wish Mr. Graham the best.

Mr. Graham is a wonderful man and will be a great addition to the GOP in Raleigh. I believe that he will serve the people of the 34th district well. Someone I can get behind during the next election cycle.

We need the kind of representation Bill Graham can provide with his expertise, intelligence and of-the-people priorities.

… Other voices: Keep politics out of judiciary

Salisbury’s own District 77 Rep. Harry Warren is responsible for renewed partisan judge races in North Carolina. His first reason is it’s the Democrats’ fault; they did it first. Then he would want judges in his own cases to share his values — whatever those values are. (Check video of his last town hall.) I can see no value in a politically rigged judicial system. It’s corruption.

Thank you, David, for taking us to other parts of our country that we otherwise would not have the opportunity to visit. Been following you since Day One. Safety of travels to you.

Other than a few sponsors and or close friends and relatives, who cares about a grown man riding a bicycle?

Following a local athlete across a countrywide journey is news worthy. I follow local folks here in my town in the Midwest. They work hard and have a drive and discipline that has to be admired. …

I am following his ride from the Midwest. Keep it up, Salisbury Post!

Frankly, I’m jealous. Wish I could do 75-100 miles a day, day after day, for five to six weeks in ever-changing weather conditions. What I admire most is doing that, being bone tired and writing about it everyday.

Thank you for this adventure. I keep up with you everyday. Safe travels and the wind at your back. Learning about stuff I will never see.

You are always in my family’s daily prayers. God bless your travels, from China Grove, N.C.

Good for them, nice to see something going back into that location.

Beautiful store. It really does have something for everyone. So unique.