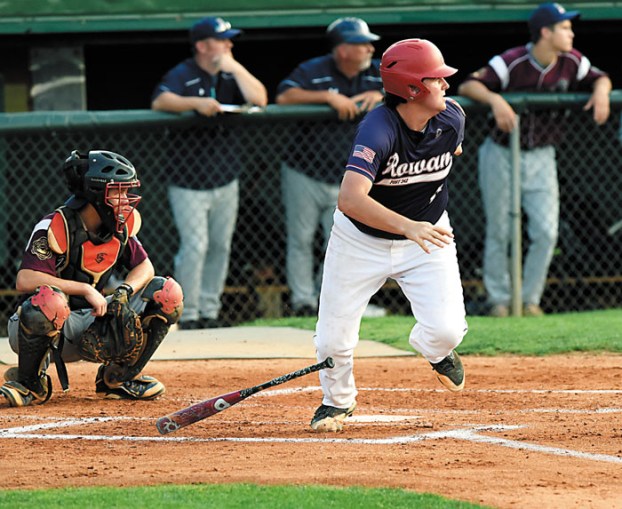 It’s a best-of-three series, with Game 2 set for McCrary Park in Asheboro on Sunday night.  Both teams already have qualified for the state tournament. At stake are a trophy and a No. 1 seed in the state tournament, but mostly, this is about big crowds and bragging rights.

“Both teams are playing this series to prepare for the state tournament and it’s not like we’re fighting for our lives,” Rowan County coach Jim Gantt said. “But we want to win it. If they’re keeping score, we’re going to try to win it.”

“They had some injuries and illnesses and they had some really  unusual things happen to them,” Gantt said. “But I believe they’ve got everyone back now.”

The Rowan-Randolph rivalry has been a tremendous one, as they’ve been two of the top three programs in Area III (High Point is the other one) in recent years. Going back to its days as Salisbury Legion, Rowan has taken 18 Area III championships, a lot more than anyone else. But Asheboro/Randolph ranks third with eight titles, trailing only Rowan and Kannapolis (11).

Rowan has experienced huge heartbreaks against Randolph teams beyond the borders of Area III.  As the host team, Randolph ended state champ Rowan’s 2015 season in the Southeast Regional, and in 2008, Randolph handed Rowan a crippling loss in the state tournament in Gastonia.

Still, if a rivalry can be a friendly one, this one is. There’s been a lot more mutual respect than hard feelings over the years because of the coaching staffs.  Gantt, who has piloted Rowan County to 498 wins in his 17 seasons at the helm, is in the N.C. Legion Hall of Fame. He was joined in the Hall earlier this year by Randolph coach Ronnie Pugh, who has piloted Post 45 for the last 13 summers.

Gantt has coached Rowan teams against Randolph 57 times and has a 34-23 mark. That’s a good record, but those 23 losses represent the most that Gantt has against any team during his coaching tenure.

Randolph caused serious trouble for Rowan from 2005-08 when Randolph won 12 of the 20 meetings. Rowan has fared better lately.

“We have played them a lot over the years, but not just in the playoffs,” Gantt said. “We play them as much as we can in non-league games in the regular season because you like playing people that you like. They do Legion baseball the right way. There’s no B.S., just baseball. And they’ve got a great ballpark that we like to play in.”

As always, Randolph has quality players. There always seem to be a couple of Marshes on the Post 45 roster, and there are two more this year.

Catawba catcher Cam Morrison, who backed up draft pick Zac Almond during the college season, has swung a big bat for Randolph. So has Dawson Painter, who will be Rowan star Chandler Blackwelder’s teammate at UNC Pembroke this fall.

On the mound, Randolph got three solid starts in its semifinal win against Davidson County from lefty Webb and right-handers Ryan Hill and Bobby Weary. All three are experienced pitchers, who were 2016 high school graduates.

“They do have good starters, but I think this series will likely come down to the guys in the bullpen for both teams,” Gantt said.

It’s going to be hot and neither team is going to push starting pitchers to throw extending innings, so the bullpens will be vital.

Gantt made a major lineup change for the High Point series, installing center fielder Chandler Blackwelder at shortstop. That shifted Henderson Lentz from left field to center and moved Brycen Holshouser from pinch-hitter to left field.

Rowan was making some errors at shortstop, but Gantt explained that the driving reason for such a drastic switch this far into the season was that Brett Graham and Griffin Myers, who had been sharing shortstop duties, are key members of the bullpen.

“We need them to pitch and both of them got big outs in the High Point series,” Gantt said.

Holshouser provided three hits and two RBIs in the High Point series out of the No. 9 spot in the lineup, so look for Blackwelder will remain at shortstop for the Randolph series.

DH Brandon Walton had a huge series against High Point with eight RBIs. Second baseman Tanner File drove in five runs. Blackwelder and Lentz had six hits each at the top of the lineup.

Right fielder Lee Poteat was relatively quiet in the High Point series with four hits, but he’s also the reigning Area III Player of the Year and could get hot at any moment.

“Hopefully, other teams will forget about Poteat,” Gantt said.

Gantt said Rowan plans to stick with the 1-2-3 rotation of right-hander John Owen, righty Olen Stamper and lefty Hayden Setzer for the Randolph series. That rotation could be tweaked in the state tournament, as Gantt will  get Setzer to the mound earlier if Rowan is facing a a lefty-heavy lineup.

Randolph will be shooting for its first Area III title since 2013. Rowan won the Area III  championship in 2015, but it was runner-up to High Point in 2016 before getting on a serious roll in the state and regional tournaments and getting to the World Series championship game.

“This will be a good series,” Gantt predicted. “When you’re playing Randolph, it always is.”