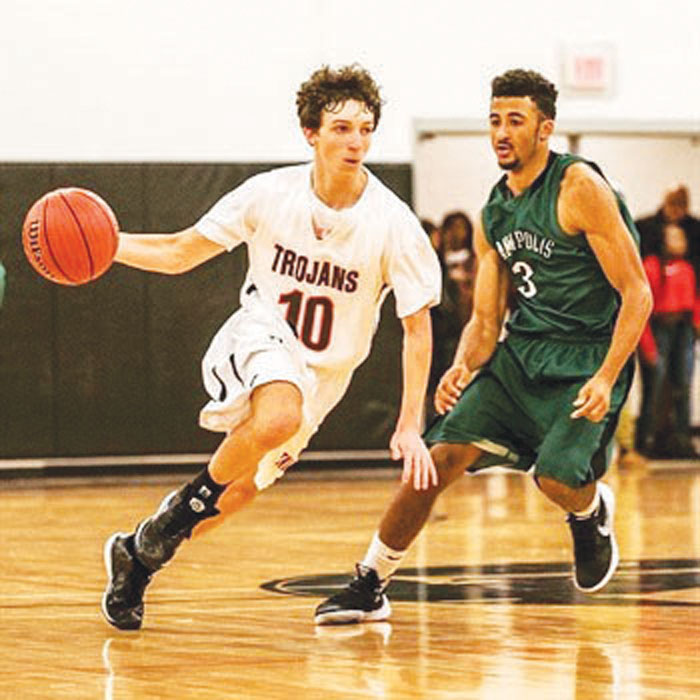 Hudl photo ... Jamie Baker (10), shown playing for Northwest Cabarrus during a game against A.L. Brown. Baker grew up on the courts of Goodman Gym while his father, Jim, was Catawba’s head coach. Jamie is continuing his education and basketball career at Presbyterian College in South Carolina.

Journeys up the mountain to Carson-Newman and Tusculum, trips down to rural South Carolina to tangle with Newberry and Presbyterian.

“I guess what I remember best is being a little kid on the bus and sitting next to Jolly Manning,” Jamie said. “He looked after me. He was always my favorite player, a guy I looked up to, and we’re still friends. He’s a coach now (Rocky Mount Prep) and he still works all of my dad’s camps.”

Memories of those long-ago trips to Presbyterian College in Clinton, S.C., one of Catawba’s fiercest rivals for titles back in the day, have become more meaningful to Jamie. He’s headed to PC on Aug. 19 for orientation, and he’ll be a freshman member of the men’s basketball team.

Presbyterian began the transition from the Division II SAC to competing at the Division level in 2007 and became a full-fledged member of the Big South Conference in 2012. So Jamie Baker, 2016 Northwest Cabarrus graduate, is on the verge of being a Division I player.

That’s been the hope, the goal, the dream for a while, although there have been a few detour signs posted along the way.

“My whole life I’ve wanted to be a college coach,” Jamie said. “So getting to be part of a Division I team is a big step toward making that happen.”

Jamie understands the game like a coach’s son is expected to and he’s a skilled player who can dribble, shoot and pass, but as far as size (5-foot-10) and strength and bounce, he’s going to be challenged to compete with D-I athletes, including the ones on his own squad. He is fully aware of that. He’s been competing against more gifted athletes for a while, in the South Piedmont Conference, a high-flying league that has produced back-to-back 3A state champs, as well as at Massanutten Military Academy in Virginia.

“Jamie is going to work as hard as anyone, he’s going to do whatever they ask, and he’s going to practice and travel with the team,” Jim said. “He’s not going to throw the ball away, and he’ll shoot the lights out. But  the most important thing is Jamie is looking down the road at the future that he wants. He’s looking at where he’s going to be five or six years from now, not five or six minutes from now.”

Walt coached boys basketball teams at Spencer High in the 1950s and then was the original North Rowan High hoops coach after Spencer and East Spencer were consolidated in 1958. Playing for his father, Jim was a solid player, averaging 8 points per game in his two varsity seasons in 1972-73 and 1973-74.

Walt advised Jim to go into business, to go where the money was, but Jim’s heart was in coaching, and he would follow in Walt’s footsteps.

After graduation, Jim served as an assistant coach at Davidson, Virginia Tech and VMI, maintaining the hope of being a Division I head coach for 15 years. Finally, he returned to Catawba as Moir’s hand-picked successor. That’s when he realized that coaching his alma mater was his dream job, after all.

It worked out well. Jim stayed as Catawba’s head coach for 20 years, for 344 wins and 236 losses. There was a nice string of SAC championships, but Jim was proudest of his outstanding graduation rate. Sixty-four of his 68 seniors earned degrees.

Jamie was a sophomore at Northwest Cabarrus when Catawba made its second men’s basketball coaching change in 54 years. After years of success, Catawba struggled in Jim’s final four seasons. Injuries, transfers and beefed-up competition within the SAC from schools such as Lincoln Memorial and Queens were factors. It was a time for a change. Rob Perron was hired to revive Catawba’s fortunes.

Jim took a step back, refocused on his camps and clinics and on a new role as director of basketball at Carolina Courts. He also had more time to help his own children, and he could tell that Jamie, who was developing quickly as a player, also wanted to be a coach.

“We had these family discussions about Jamie taking more math classes, more history classes, more what have you,” Jim said. “But Jamie wants to coach, and one of the things you really want as a father is for your kids to be able to get up in the morning, looking forward to going to work, and not dreading it.”

As a senior in the 2015-16 school year, Jamie was efficient for Northwest Cabarrus in a wicked league, averaging 11 points and 5 assists. He had 23 points and six assists in a win against West Rowan, and he had 19 points and seven assists as the Trojans edged Central Cabarrus. He had 16 and seven against a talented Cox Mill squad.

Jamie needed a year of prep school, not for grades, but for physical maturity, and was preparing to go to Hargrave Military Academy. Lee Martin, who had played for Jim at Catawba, was an assistant coach at Hargrave, and that was a great connection. But then Hargrave won a national championship and suddenly had a waiting list of supremely talented kids wanting to go there.

“When Hargrave didn’t work out, we were scrambling a little bit,” Jim said. “But Chad Myers was hired as head coach at Massanutten Military Academy that spring, and Chad practically had grown up in the basketball camps at Catawba. I sent Chad a text message, and 30 seconds later he responded with, ‘Yes, we want Jamie.'”

Massanutten is in Woodstock, Va., and while it may not have the hoops reputation of rivals Hargrave or Fork Union, the school has produced talents such as Kansas point guard and recent draft pick Frank Mason.

“It’s not an easy life at a military school,” Jamie said. “Getting up every day at 6 or 6:30, following a lot of rules, room inspections, demerits, drilling, raising the flag, getting into formation, marching to meals. But the year of post-grad helped me a lot. I gained 10 or 15 pounds and played a lot of games against very tough players.”

Jamie overcame a concussion and played on an exceptional team.  While Hargrave repeated as national champ, Massanutten was invited to play in the final eight of the prep school national tournament. Jamie had talented teammates sign with Manhattan, Winthrop and  Ole Miss.

The next step was for Jamie to find the right fit at a four-year school. Playing time would be more likely at the D-II or D-III levels, but the dream was D-I.

Gardner-Webb looked like the place for a while, but then that option fell through.

Kerns, a former Wofford assistant, took the PC reins from long-time coach and former Catawba rival Gregg Nibert in April. Kerns didn’t know the Bakers, but he knew coaches who knew the Bakers.

Several coaches made phone calls of recommendation to Kerns for Jamie. One of those coaches was Martin, who became Hargrave’s head coach in June.

“We talked with Coach Kerns and I asked if he wanted me to bring Jamie down there for a workout,” Jim said. “He told me that wasn’t necessary. He’d had enough people say enough good things about Jamie that he knew that he wanted him on his team. I’m ecstatic. It’s a quality school, not far away, and Presbyterian always has had great graduation rates.”

So the next phase of Jamie’s life is fast approaching. He works out every day, lifts weights, gets stronger and better.

“Presbyterian is going to open doors for him,” Jim said. “And you want your kids to do that thing they’re good at. Jamie will be a good coach. He might even be a general manager one day. He knows everything there is about every player in the NBA, the NFL and Major League Baseball.”

Jim marvels at his oldest son. It seems like only yesterday that he was a kid in a Catawba T-shirt, crying because he’d just lost a tough one-on-one battle with a Catawba assistant coach.

A new life chapter is also opening for Jim.

In May, he was announced as the new head boys basketball coach at Central Cabarrus High.

Jim’s first high school teaching/coaching job comes at age 60, but he still loves to teach basketball. He’ll also serve in the counseling department at Central, where his years of life experience will be an asset.

For both Bakers, coaching should continue for a long time. It’s in their blood.