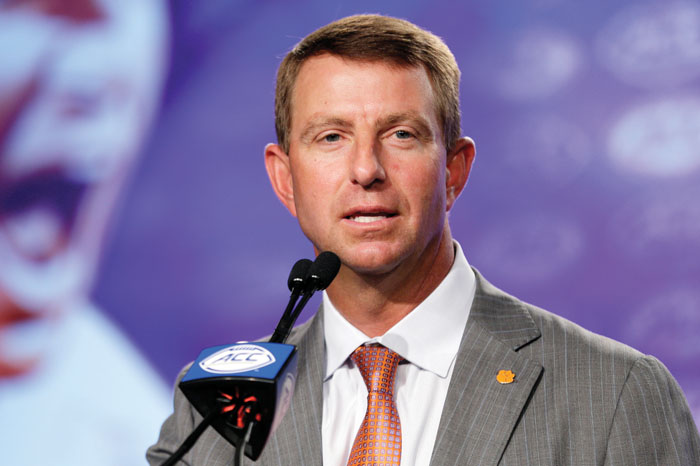 Rather, Clemson’s 10th-year coach is brimming with confidence that the Tigers can replace quarterback DeShaun Watson and a host of other top-level players and maintain the program’s success, which includes a 34-5 record over the last three seasons with two trips to the national title game.

“Everybody keeps wanting to talk about last year’s team and what we don’t have, but what I’m excited about is what we do have,” Swinney said.

Swinney said he “loves” this year’s roster because he has a hungry group of players eager to prove themselves and keep up the Clemson’s winning tradition.

Still, it may not be an easy road.

Clemson will have to do more than just replace Watson, who over his last two seasons with the Tigers threw for 8,702 yards and 76 touchdowns and ran for 1,735 yards and 21 TDs.

Returning players for Clemson account for just 22.7 of the offense from last year’s team, which ranks 128th of the 130 teams that will compete at the FBS level.

And that’s just on offense.

Defensively, the Tigers will be looking to fill vacancies created by the departure of emotional leader Ben Boulware at linebacker, defensive end Carlos Watkins and defensive backs Cordrea Tankersley and Jadar Johnson, all of whom will be in NFL camps this summer.

Not that Clemson’s opponents are feeling particularly sorry for them.

“Listen, Clemson won’t have a down year for a long time with Dabo Swinney being there and with the recruiting they are doing,” said Florida State safety Derwin James.

He remembers several years ago begging for a chance to get inside quarterback Tajh Boyd’s home for a recruiting visit. Now players are begging for Clemson to recruit them.

Swinney is optimistic that Deon Cain, who averaged 19.1 yards per reception last year, can replace Williams, who was selected seventh overall in the NFL draft by the Los Angeles Chargers after catching 98 passes for 1,361 yards and 11 touchdowns. Swinney called Cain “one of the best wide receivers in the country.”

Hunter Renfrow, who has four TD catches in the last two national championship games, is back at receiver along with Ray-Ray McCloud, Cornell Powell and Trevion Thompson.

At running back, three returning lettermen in C.J. Fuller, Adam Choice and Tavian Feaster will battle for a spot to replace Gallman, who ran for 17 touchdowns last season. Milan Richard, a nephew of Herschel Walker, will look to fill the hole at tight end. Clemson returns four starters on the offensive line.

Defensively, the Tigers have managed to replenish quickly, too.

They will return seven starters after losing seven and eight the two previous seasons. Despite that turnover the Tigers have finished in the top 15 on defense four straight seasons.

“If you recruit well and you develop well, then you can sustain consistency,” Swinney said. “If we can compete for this conference year in and year out, hey, we’re going to have those years where we get it done.”