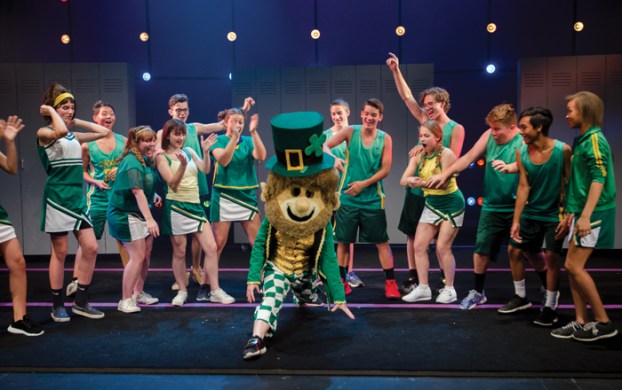 Graham Harrington, front, dances as a mascot in the PPT production of 'Bring it On' at the Norvell. KRISTI CRAVEN/ SALISBURY POST

Opening night for PPT Youth Theatre’s ‘Bring it On’

Opens tonight at The Norvell Emma Shelton, top, is thrown into the air during a Truman High School cheer in the PPT production of ‘Bring it On.’ KRISTI CRAVEN/ SALISBURY POST

Bitingly relevant and sprinkled with sass

Bitingly relevant, sprinkled with sass and inspired by the hit film about the cut-throat world of competitive cheerleading, Bring It On The Musical takes audiences on a high-flying journey that is filled with the complexities of high school friendship, jealousy, betrayal and forgiveness.

Campbell (Graham Harrington) is cheer-royalty at Truman High School and her senior year should prove the most “cheertastic” — she’s been named captain of the squad! But, an unexpected redistricting has forced her to spend her final year of high school at the neighboring hard-knock Jackson High School. Despite having the deck stacked against her, Campbell befriends the dance crew girls and, along with their headstrong and hardworking leader, Danielle (Alaina Newell), manages to form a powerhouse squad for the ultimate competition — the National Championships.

Piedmont Players Theatre’s final youth production of the season, opening next Thursday at the Norvell Theater, is directed and designed by Reid Leonard and introduces musical director Caroline Stephenson and Choreographers Brooke Baldwin and Tanner Groppi.

Due to the many complex cheerleading routines in the show, PPT has partnered with Sara Biles and Lauren Dendy of Elevation Cheer Company who have choreographed the same towering human pyramids and high-octane basket tosses you’d expect to see on ESPN.

The energetic young cast is one of the most diverse to ever perform on the Norvell stage; including actors from Salisbury, China Grove, Mt. Ulla, Mooresville, Statesville, Oakboro, Thomasville, Albermarle, Concord, Linwood and Lake Norman.

The kind of coming of age tale that appeals to tweens and teens alike, PPT’s Bring It On boasts diverse characters, youthful and witty dialogue and a overall

theme that it’s always ok to be yourself. With an exciting fresh sound and explosive

choreography and aerial stunts, this hilarious, universal story is sure to be everything that you hoped for and nothing like you expected.

‘Hello my name is …’ opens Friday at CFA

An exhibit to celebrate the positive impact of recovery in our communities Submitted Asheville visual artist Douglas Lail will present... read more