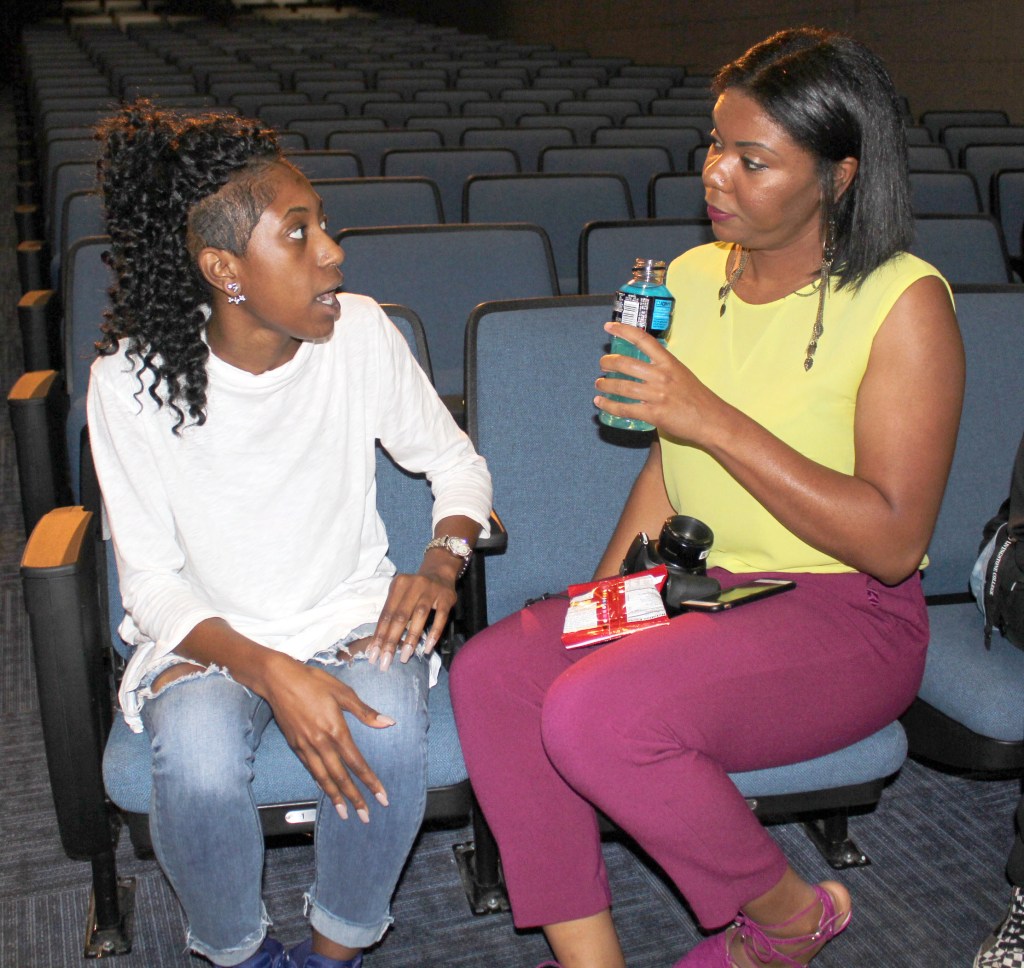 Jamie Miller of Pageland, right, CEO and founder of 518 Media Group, talks with a student about starting a nonprofit after her talk to Bridge students of Livingstone College. She accompanied speaker Jeevan Brown. Submitted photo

SALISBURY – What do a legislative speechwriter, an IT business analyst and a media group CEO have in common?

Here’s a hint: They are all motivational speakers.

What they also share in common is that they all have spoken to Livingstone College’s Bridge students this summer, sharing their own stories of triumph and inspiration.

Bridge students are those participating in the college’s summer Bridge Program, which prepares students for college enrollment by giving them a second chance at academic success. Upon completion, students are admitted into Livingstone in the fall as provisional students.

Believe in the ‘I’mpossible’

Keith L. Brown, the speechwriter, is best known as Mr. I’m Possible. He kicked off the Bridge Program orientation.

Using upbeat music, chants and dancing, Brown captivated the audience with his sense of humor and relatability. As a young child, he was labeled an at-risk special education student. Today, he is an author who developed a curriculum titled “Not impossible — I’m Possible: A Relevant Guide on Leadership and Life Skills for Students and Families,” which is being read and studied globally.

He has been named one of the top speakers and consultants in education by Insight Publishing and the International Speakers Network.

After getting peer mentors and faculty on stage to do the Cupid Shuffle, a popular line dance, Brown engaged the audience — which also included Upward Bound students — with a speech sprinkled with quotes and catchphrases.

Brown told the students to start seeing themselves as who they want to be. For example, if you want to become a lawyer or a doctor, start referring to yourself as one.

His son wants to become a lawyer, so Brown refers to his son as Attorney Brown.

Jeevan Brown, a business analyst and journalist, was the program’s second speaker during orientation.

He is the author of “A Lesson Learned,” which features 16 true college stories designed to help young adults and college students navigate the pitfalls of college life.

A Landover, Maryland, native, Brown told the story about how his GPA was a 2.29 in high school and that he attended Johnson C. Smith University in Charlotte because it was the only school that accepted him.

He took advantage of opportunities in college and started working with the biweekly campus newspaper. One of his professors noticed he had a knack for engaging readers and quickly propelled him to feature editor of the paper.

While still a student, he worked as a feature writer for CharlotteVibe.com and was a correspondent for the Charlotte Bobcats NBA team. After graduation, he started writing for OZONE Magazine and interviewed hip-hop artists such as Lil Wayne, Rick Ross, Young Jeezy and the Underground Kings.

He encouraged students to write down their goals with timelines and to make vision boards.

“If you want to kill your big dream, tell it to a small-minded person,” he said.

Using a PowerPoint presentation, he outlined highlights of the book including a chapter on achieving while grieving that tells the story of his best friend, who died while he was in college; a chapter on the Highway Patrol about a friend who was smoking marijuana on the highway and got pulled over by a cop; and chapters on time management, focus and finance.

He gave students a quiz on the information using the Kahoot app and gave out prizes, as well as an autographed copy of his book for each student.

“Don’t be influenced by your peers or music,” he said. “Watch the company that you keep. Don’t rush to be in a relationship. Stay focused.”

According to the Journal of Media, one of the biggest distractions for students is using digital devices in the classroom for nonclassroom purposes.

Brown interviewed Livingstone’s police chief, Gloria Blaire, during the program. She talked about protocols students should follow if pulled over by an officer.

“Don’t give them a reason to be hostile. Be courteous, watch your tone and voice level and make no sudden moves,” she said.

He also brought with him a guest, Jamie Miller of Pageland, South Carolina, who owns 518 Media Group. Miller said she always wanted to own her own business, but a guidance counselor encouraged her to be an administrative assistant instead.

She followed her own heart and, though financially challenged, she and her family managed to raise enough money for college. Before her sophomore year, her father died of lung cancer. She considered dropping out to help her mother, but she resolved to continue.

After college, she landed a corporate job making good money, but a client made a racially insensitive comment about her hair. She eventually quit and started her own media group. Her first project was the album release party for R&B singer Fantasia in 2014.

“Allow the mistakes others make to be the blueprint for what you shouldn’t do,” she said.

In addition to academics, the Bridge Program, which was started by Livingstone President Jimmy Jenkins Sr. in 2006, also focuses on attitude and behavior in preparing students for college life.