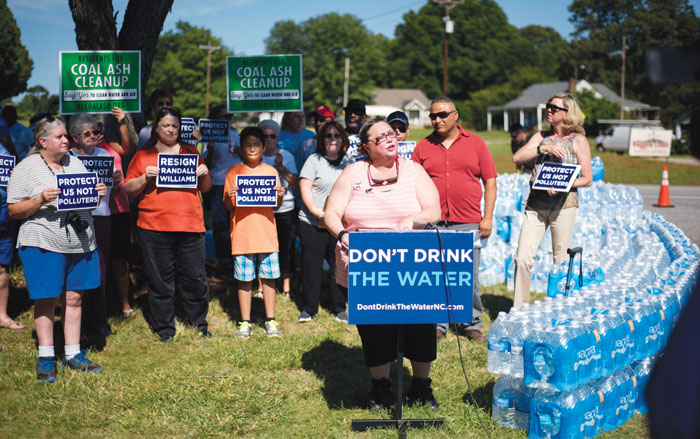 Deborah Graham, a Dukeville resident, speaks during a water giveaway for her neighborhood in this June 2016 photo. Jon C. Lakey/Salisbury Post

SALISBURY — State environmental regulators last week announced water quality standards for wells near coal ash ponds that are not going over well with some locals.

The N.C. Department of Environmental Quality on Friday set 10 parts per billion as the limit for hexavalent chromium and vanadium in filtration systems set to be installed as a result of concerns about coal ash contamination. Both items are metals; hexavalent chromium is known to cause cancer. After some criticism about its decision, DEQ on Wednesday announced it would convene a scientific panel to determine adequate groundwater standards.

State law requires utilities such as Duke Energy to offer water lines or filtration systems to all houses within a predetermined distance of coal ash ponds.

The 10 parts per billion number is significant because it’s a departure from recommendations by the N.C. Department of Health and Human Services, which set 0.07 parts per billion as the health screening level for hexavalent chromium and 0.3 as the level for vanadium. Both levels were used in 2015 to declare dozens of water wells unsafe to drink from. Later, state officials lifted the “do not drink” recommendations.

Megan Davies resigned as state epidemiologist because of controversy related to the screening levels. On Tuesday night, WBTV News reported on a memo from DHHS that stated the health agency would continue using the 0.07 parts per billion screening level.

DEQ did not respond to questions from the Salisbury Post about the 10 parts per billion standards but said in a news release that the goal is to ensure every family has access to safe, clean drinking water.

“We’ve set performance standards for coal ash contaminants to ensure that families who use these filtration systems will have water that meets or exceeds federal and state standards,” DEQ Secretary Michael Regan said in the news release.

Deborah Graham, who lives in Dukeville, said she is aggravated by and ashamed of the recent announcement. Graham said she expected Gov. Roy Cooper’s administration to listen to scientists.

“We voted for change, and we pushed for change,” she said. “It’s kind of like our people have now followed suit. This protects Duke Energy. It does not protect the people of North Carolina.”

Graham is one of the 175 people who opted to receive a water line instead of a filtration system, which will be subject to the new standard.

Asked about the filtration systems to be installed by Duke Energy, company spokeswoman Erin Culbert said they are capable of producing “very high water quality.”

“We selected options that were capable of getting as close to the N.C. DHHS health screening levels as we could,” Culbert said.

As has been repeatedly stated by Duke Energy, Culbert said, there’s a “robust body” of independent research to demonstrate that coal ash basins at Buck Steam Station and other plants are not affecting neighbors’ water wells.

“They would allow Duke to install water filtration systems that could contaminate at levels far above what hook-ups to municipal water would provide,” said attorney Mona Lisa Wallace. “We believe all Duke coal ash neighbors and their families are entitled to municipal water hook-ups and clean water.”’

It appears DEQ is already responding to some of the criticism surrounding its recent decision to set water standards at 10 parts per billion. DEQ Wednesday night announced it would convene a state panel to determine correct levels of chromium in groundwater.

“We recognize the widespread community interest and concerns about these performance standards,” Regan said in a news release. “In conjunction with the issuance of the performance standards, I am directing the Secretary’s Science Advisory board to evaluate more recent health data on hexavalent chromium and provide a public forum to address these important issues and provide recommendations that could result in any necessary state groundwater standards.”

The advisory board is made up of toxicologists, epidemiologists and other health officials. The news release said Regan would soon appoint new members to the board.

So far, 97 percent of people eligible for a water line or filtration system have informed Duke Energy of their preference. Of the 189 eligible households, 175 chose a water line, four chose a treatment system, four opted out totally and six have not responded.

Rowan County and Duke Energy are currently working to extend water lines into the Dukeville area. 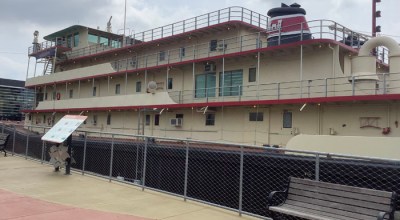