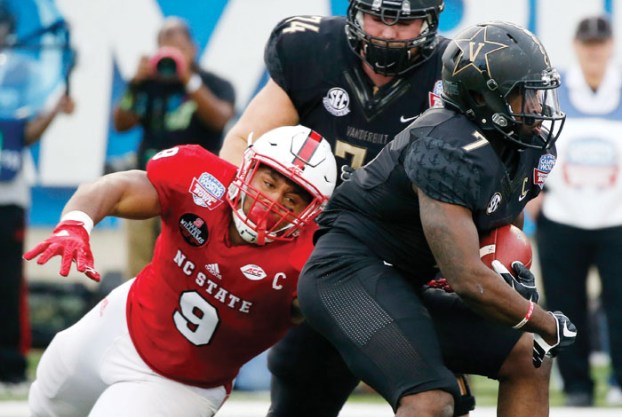 RALEIGH (AP) — North Carolina State’s Bradley Chubb used to believe pass rushing was solely about getting to the quarterback as quickly as possible.

Ask him now, and his answer is far more detailed.

“It’s understanding how that person lining up across from you thinks,” he said, “how they’re set, how they react to different things. . It’s seeing those small things.”

It’s an example of how the senior — who will attend this week’s Atlantic Coast Conference preseason media days in Charlotte — has matured into one of the nation’s top defensive ends and an NFL first-round draft prospect.

The 6-foot-4, 275-pound native of Marietta, Georgia, ranked tied for fourth in FBS with 22 tackles for loss last season and tied for 19th with 10.5 sacks. He flirted with entering the NFL draft but rejoins a veteran front that helped the Wolfpack rank eighth nationally against the run (108.6 yards).

Chubb said much of that success is rooted in understanding “the art of pass rushing” — a term picked up from former Wolfpack line coach and current New Orleans Saints assistant Ryan Nielsen — since arriving in 2014 as a 240-pound freshman.

“When I first heard it, I was like, ‘What does he mean? Everybody’s doing the same thing, you’re just running up the field,’” Chubb said in an interview with The Associated Press. “But when you sit down and you’re looking at the differences and looking at the small thing a tackle does, that’s when it clicks.”

He nearly doubled his sophomore totals (5.5 sacks, 12 tackles for loss) last year as a result, helping the Wolfpack close with wins against rival North Carolina and against Vanderbilt in the Independence Bowl.

Chubb said he tries to study details such as how a lineman uses his hands or moves his feet to handle different rushing techniques.

“Let’s say you set them up with a speed rush, and then the next play you know what he’s going to do because you just speed-rushed him,” Chubb said. “That’s when the power comes into play. I feel like the preparation brings you right to the field, because you know exactly what you’ve been studying all week.

“You know exactly how you’re going to attack different things he does. It’s pretty much working off yourself.”

His father, former Georgia defensive lineman/linebacker Aaron Chubb, said he has noticed changes in how his son talks about playing defensive end when the two watch games together.

“Early on, it was just like, ‘Trying to make a play,’” Aaron Chubb said. “But then as he grew and got better and matured, it was more of a strategy. It was more of a concept that he was trying to grasp. That’s where I can see that he’s grown and become a better student of the game.”

Fifth-year coach Dave Doeren has noticed another sign of maturity: Chubb is better at maintaining poise and shaking off frustration during practices and games.

He’ll need all of those lessons this fall as a focus of opposing linemen.

“When you think about it, you play 13 games and you get 13 sacks, you’re an all-American,” Doeren said. “That’s only one sack a game. It doesn’t sound that hard for a guy as good as him. But he’s going to be double-teamed, he’s going to be chipped. He can’t afford to not play every play like it’s the most focused play of the game, because he came back to be an all-American.”

By Mike London mike.london@salisburypost.com KANNAPOLIS — It would be tough to find anyone who loves A.L. Brown High more than Empsy Thompson.... read more