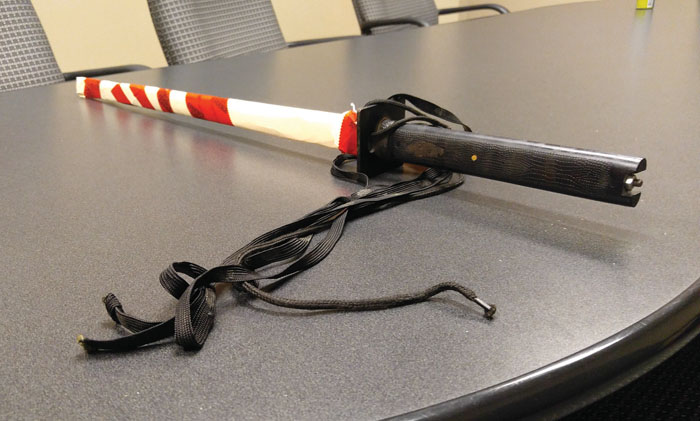 Submitted photo. Police say a woman's son threatened her boyfriend with this sword.

SALISBURY — A Salisbury man was charged with assaulting his mother’s boyfriend with a katana sword. Police say the mother then took the sword and struck her son.

The Salisbury Police Department charged Dennis Anthony Burgess, 29, of the 1000 block of Lincolnton Road, with misdemeanor assault with a deadly weapon.

His mother, Theresa Ann Hartsell, 48, also of the Lincolnton Road home, was charged with misdemeanor assault with a deadly weapon.

Both mother and son remain in the Rowan County Detention Center under a $500 secured bond.

A police officer arrived at the home about 8 p.m. Tuesday in response to a domestic incident involving a sword. The officer had to separate the parties.

Hartsell told the officer that as she was coming from the bathroom, she saw her son wielding the sword and walking toward her boyfriend.

Burgess raised the sword like a baseball bat and swung at his mother’s boyfriend, striking him, a police report said. Burgess threatened to cut the boyfriend’s head off, the report said.

Hartsell grabbed the sword and cut her finger in the process. She hit her son multiple times with the sword, police said.

No serious injuries were reported, though Hartsell required one stitch for her finger.

Burgess told officers that the couple had been having “issues” for several days.