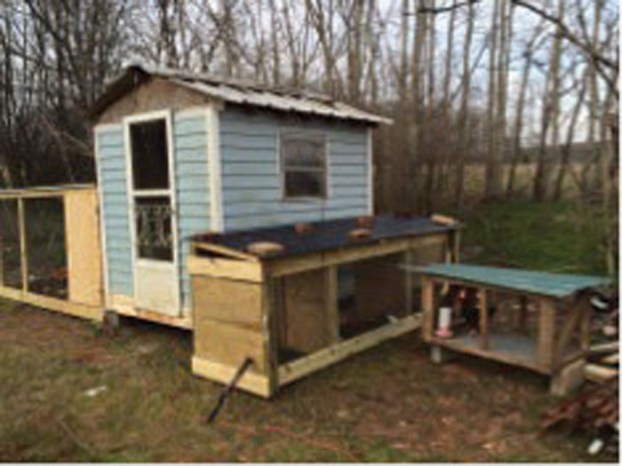 The chicken coop after Sheriff's Office Deputy/SRO Danny Lindley built a new one for a local child. Submitted SALISBURY — A school resource officer with the Rowan County Sheriff’s Office was presented the Hank Schneider Above and Beyond the Call of Duty Award at a recent statewide conference after being nominated for helping a local child suffering at the hands of an abusive father.

Deputy Danny Lindley, a 15-year veteran officer with the Sheriff’s Office, was presented with the earlier this week at the conference in Concord.

Three years ago, Lindley disarmed a student wielding a butcher knife at West Rowan Middle School. He received the Blue Line Brotherhood Officer of the Year Award for his quick action in that situation.

In the most recent incident, Lindley was approached by a West Rowan Middle School student who told him that he lived with his grandmother and his father had recently come to the house and caused trouble.

The father, who didn’t live at the home, began beating the boy, then took the child outdoors and continued beating him.

The father told the boy he would kill the animals, ducks and chickens, which the boy had raised from chicks. The father destroyed two chicken coops and killed four baby chicks and six baby ducks. He tried to kill a dog but another dog broke loose from its chain and bit the father on the leg. The boy ran into the woods and hid until his father left.

Lindley couldn’t get the child out of his mind, according to the nomination letter, and he sought the help of his colleagues to rebuild the chicken coops.

Deputies donated building supplies, and a Facebook plea resulted in community donations of cash, gift cards and chicks. Lindley spent many off-duty hours recruiting volunteers, which included Sheriff’s Office staff and their family members, and overseeing the logistics and design of the coops and materials.

Lindley and the volunteers worked from early morning to late in the evening not only to repair but also to rebuild larger coops. The boy and his family worked along with the volunteers throughout the day and expressed their gratitude and amazement for what was happening, the letter said.

“His selfless efforts on behalf of one of ‘his’ kids helped build bonds of friendship, respect and trust between law enforcement and an appreciative family,” the letter said.

The nomination letter also said Lindley “measures his duty not merely in terms of his paid responsibility as a public servant but also by his obligations as a human being.”

The boy’s father was later charged with breaking and entering, animal cruelty and misdemeanor assault.

David Freeze: Working to get back on track