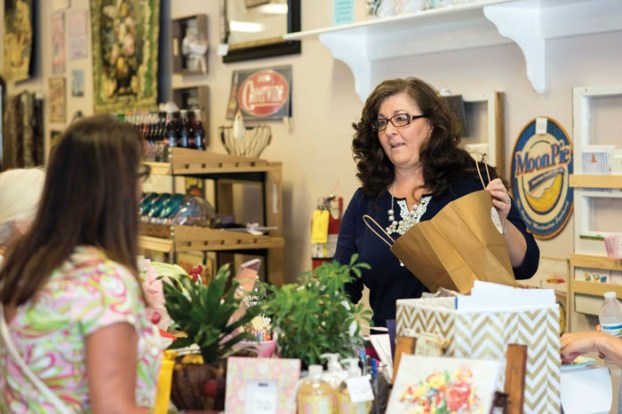 Connie Edwards helps out a customer at her new store on Monday. Dale and Connie Edwards hosted a small gathering to officially open their new store called Mary Mae's A Southern Mercantile in Spencer on Monday afternoon. The Edward's family is occupying the former Stoudemire Furniture building in the 300 block of South Salisbury Ave. Jon C. Lakey/Salisbury Post

SPENCER — A new business in Spencer is bringing new life to a building that’s been a downtown feature for more than 100 years.

Connie Edwards and her brother David LeFrage saw potential in the old Stoudemire Furniture building on South Salisbury Avenue. After 132 years in operation, the business closed in late 2015.

Town officials say a furniture business continued to operate out of the space after Stoudemire Furniture closed. But the property was put up for sale.

Edwards and LeFrage, natives of eastern Rowan County, say it was the perfect place to set up shop.

“We were actually looking for more storage space,” Edwards said.

But the building offered other opportunities, with lots of storage on the second floor and three storefronts on the first floor.

So the siblings opened a brick-and-mortar location for the online businesses they’d been running for years.

The business sells a little bit of everything, from tea cups to afghans to college wear. The store also features children’s, men’s and military sections.

“It’s not just a boutique,” Edwards said. “There’s something for everyone.”

A large selection of the stock is made in North Carolina or by local entrepreneurs. Edwards makes several of the items herself.

While Monday was the grand opening, the store has been open since around Mother’s Day. Edwards said she has had great feedback from Spencer residents and people visiting the N.C. Transportation Museum across the street.

Next door, LeFrage is setting up an antiques furniture business, to be called Spencer Stations.

He’s been buying antique furniture for years and storing it on several properties. From there, he’d sell online or at auctions. Now, he’ll have a physical location to operate in.

LeFrage said owning a business in another part of the county helped him find a few hidden treasures, like the Transportation Museum.

“It opens your eyes,” he said.

The third and final storefront in the building is still vacant. Edwards and LeFrage said they’re not sure what will go there yet — possibly another store, a live music venue or an auction space.

At the grand opening, Rowan County Commissioner Greg Edds said the businesses represent a spirit of “renewal” that has been building in Spencer.

New businesses, he said, are a “sign of life” in the community.

Spencer Mayor Jim Gobbel said he is happy for the businesses to be here. Stoudemire’s had been one of the oldest businesses in Spencer and Rowan County, and it is good to see the building still in use, he said.

“I hope what happens here will continue down the street,” Gobbel said, gesturing to downtown Spencer.

By Josh Bergeron josh.bergeron@salisburypost.com SPENCER — The N.C. Transportation Museum will have more money this year because of the state budget... read more