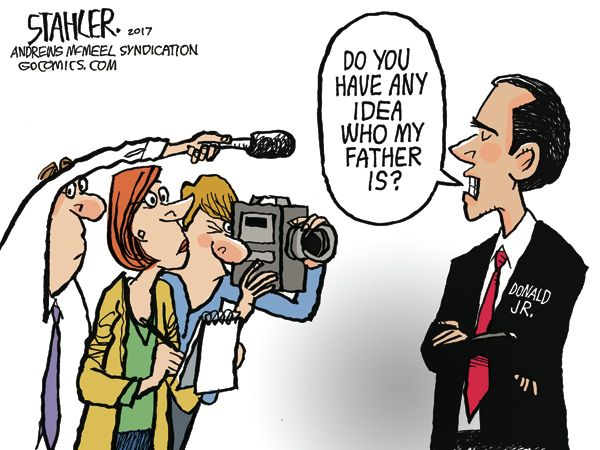 On Monday, the New York Times published a jaw-dropping story alleging that a 2016 meeting between a Russian attorney and Donald Trump’s son-in-law had been arranged to discuss dirt on Hillary Clinton that a Kremlin-connected lawyer might be willing to provide to the Trump campaign. Donald Trump Jr. had been informed via email that this compromising information was part of a Russian government operation to help his father win the presidency.

Facing an accusation like that, Donald Trump Jr. obviously didn’t want to sit around while the Times dribbled out information bolstering the speculation that the Trump campaign had colluded with Russia. He confirmed it himself, tweeting out the email chain. His response to being informed that Russia was trying to engineer the outcome of an American election, with efforts that included providing damaging information about Clinton? “If it’s what you say I love it especially later in the summer.” Trump’s son-in-law, Jared Kushner, was copied on the email.

Is this illegal? Does getting opposition research from a foreign power count as an in-kind campaign contribution from a foreign national, one that might leave Jr. and Kushner vulnerable to criminal prosecution? I have no idea; I am not a lawyer. But it hardly ceases to be a problem if this somehow manages to squeak through some hole in our federal election laws. What they did is so obviously wrong that a 10-year-old child would know better.

Social media indicates that there are some people out there still trying to defend the Trump camp’s relationship with Russia, so it bears spelling out why this is wrong.

Donald Trump is an American who ran for office under a slogan of patriotic pride and love of country. People who love their country do not help rival powers intervene in their country’s elections, even if that intervention might have the lovely side effect of getting them elected. Americans running for American office must pick sides: the will of American voters or the influence of a foreign power. (Hint: You choose your fellow Americans.)

What happened at the meeting could ultimately be irrelevant. The sin to which Donald Trump Jr. has already confessed is egregious enough. A decent person would not give an audience to a foreign power promising to help tear down the opposition. A decent person certainly would not contemplate and suggest timing of any document release — which moves this revelation beyond merely “taking a meeting you shouldn’t have” and into the territory of “a presidential campaign actively coordinating with foreign agents.”

We are now past the point of anonymous sources and innuendo. Donald Trump Jr. showed us the primary sources, pleading guilty in the court of public opinion.

The president’s supporters have already retreated to what now looks to be their last rhetorical stand: to say that this isn’t collusion, but just politics. They get creative and postulate that this isn’t unlike what Clinton’s campaign would have done.

Here’s the reality: Once you are given the details of a Russian attempt to change the outcome of an American election, there is only one patriotic thing you can do, and that is to get on the phone to the FBI and say, “I have some very disturbing news.” End of story.

But no, no, Trump’s supporters continued to insist; it’s not really collusion with a potential enemy of the U.S. They submitted close parsings of the legal definition of collusion and claimed that any other usage of this common word was wrong. They suggested that in fact Donald Trump Jr. was doing his moral duty to find evidence of criminal behavior by Clinton, though they could not explain why, if he was so concerned about her possible criminality, he did not get the relevant authorities involved.

These dogs won’t hunt. And the fact that this is where supporters have ended up after mere hours of social media badinage tells you just how weak the defense is. As a general rule, at the point where you are pretending to have a shaky command of ordinary English words, you are losing the argument. Just ask Bill Clinton how convincing anyone found his creative interpretations of the verb “to be.”

After months of suggesting that all the fears of Russian scheming to interfere in our elections were just so much hype and hysteria from a hopelessly biased media, the Trump family has now confirmed that they were not only aware of these efforts but were hoping to help. It seems wildly implausible that news of both the Russian efforts, and his own campaign’s fellow-traveling, failed to reach Donald Trump Sr.