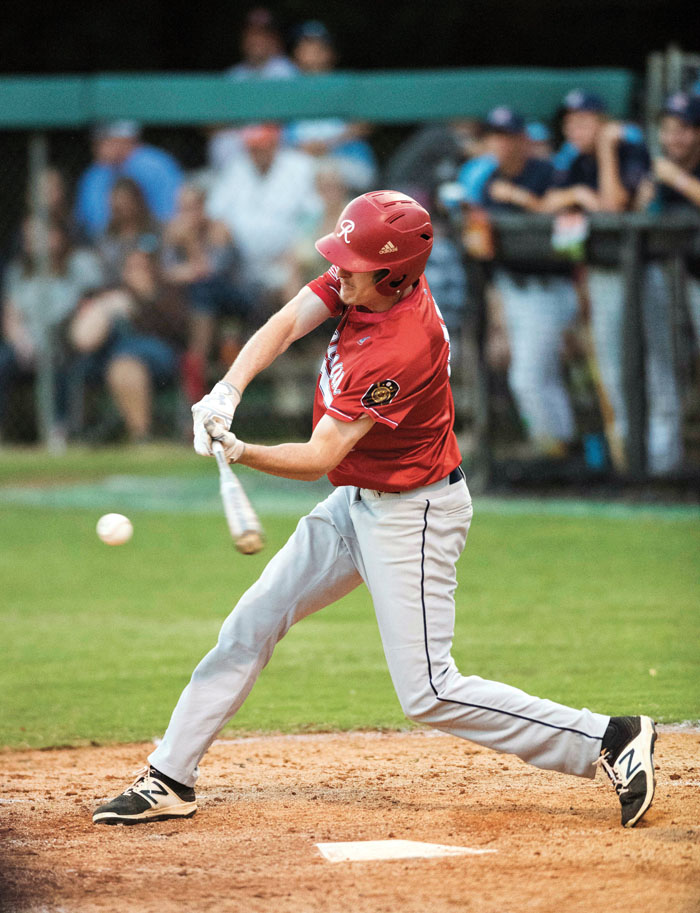 THOMASVILLE — Rowan’s American Legion team, not used to close games during its amazing season, had one here Tuesday night at Finch Field.

Rowan overcame a first-inning, 2-0 deficit to win, 8-5, taking a 2-0 lead in the Area III semifinal series.

The two teams play Game 3 tonight at Newman Park, and Rowan can close out the best-of-five series with a victory.

Lefty Joe Harrison followed Stamper and allowed two runs in the eighth inning, as the HiToms cut a 6-3 deficit to 6-5. However, Pearce Wilhelm came on and closed the door on the home team.

Wilhelm earned his second save of the season by going the final 1 2/3 innings, pitching out of a two-on, one-out jam in the bottom of the ninth.

At 29-1, Rowan hasn’t needed a closer in most of its lop-sided victories this season. But as the season moves forward, Wilhelm appears to possibly be the man.

Seventh-place hitter Chandler Lippard had just one hit, but it was big one — a run-scoring single that briefly tied the game, 2-2, in the fourth inning.

Tyrese Hearst led off the High Point fourth inning with a double and later scored on Anthony Cuozzi’s sacrifice fly, putting the HiToms back on top, 3-2.

However, Lentz led off the Rowan fifth inning with his first home run of the season, quickly tying the game. Poteat followed with a double and then, a single by Walton chased High Point starting pitcher Charlie Edwards.

Owen greeted reliever Jacob Kohns with a sac fly that gave Rowan a 4-3 advantage, a lead it would never relinquish.

Rowan added insurance runs in the eight and ninth innings.

Owen led off the eighth by reaching on a two-base error by HiToms’ third baseman Andy Ramirez. Atwood promptly doubled home Owen and an out later, Tanner File brought home Atwood with another sac fly.

In the ninth inning, after High Point pulled to within 6-5 in the bottom of the eighth before Wilhlem pitched out of trouble, Rowan added two more runs.

Blackwelder led off the final frame with a single and quickly swiped second base. He went to third base on a single by Lentz and scored on Rowan’s third sac fly of the night, this one from cleanup hitter Walton. Another run came in on an error by Kohns.

Kohns walked and Luke Spiva singled for the HiToms after one out in the bottom of the ninth, but Wilhelm struck out cleanup hitter Hearst and then got Ramirez to hit into a game-ending fielder’s choice.

NOTES: The two teams combined for five doubles and four sacrifice flies. … Lippard made several sparkling defensive plays at first base for Rowan. … Edwards retired nine of the first 12 Rowan batters before running into trouble in the fourth inning. … Seven different Rowan hitters drove in one run each.