When it’s hot, you need watermelon 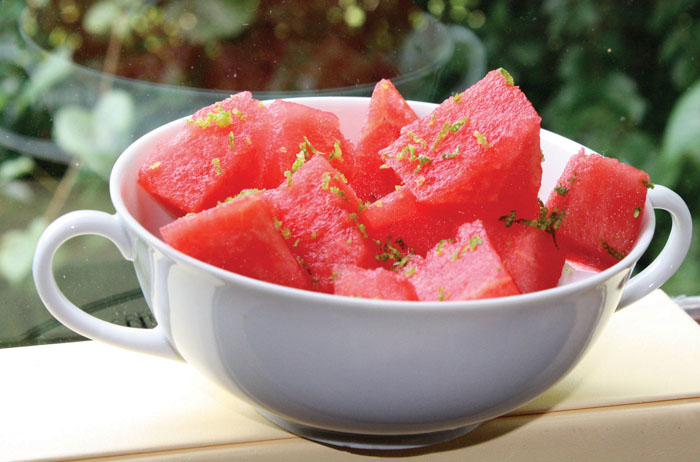 Watermelon is almost synonymous with July, isn’t it?

We get the double, or triple whammy of burning sunshine, relentless heat and dripping humidity.

Everyone is looking for a way to stay cool. And everyone else is reminding us to stay hydrated, stay hydrated.

Time to dive into some watermelon for sweet relief.

Lime does wonders for watermelon. A simple summer side dish or dessert is a bowl of watermelon sprinkled with the zest of a lime. You don’t even have to use the juice, but you can if you want to. Watermelon and lime zest make a delicious contrast.

Many people, especially in the South, salt their watermelon. If you’ve been told to cut down on salt, try the lime. It has the same sort of effect.

A little balsamic vinegar on watermelon is also a great contrast in flavors that makes watermelon a whole new dish. You can either sprinkle the vinegar over the bowl of melon or reduce the vinegar to a syrup by boiling it for 10 minutes or so. The syrupy vinegar is also good with ice cream.

Speaking of ice cream, vanilla and watermelon are surprisingly good together. Cut a wedge of watermelon and top it with vanilla, and maybe a drizzle of chocolate syrup.

Watermelon mixes well with another summer staple, cantaloupe. How many bowls of the combined melons have you seen at a summer party?

The honeydew melons we can find at the grocery store around here have little to no flavor. If you can find them, try a light-colored melon called a Sensations melon.

Melons are showing up at the Farmers’ Market, at produce stands, sometimes in a truck on the side of the road.

First — how to pick a ripe watermelon:

Watermelons should feel heavy for their size.

Look for the yellow patch. Watermelons have a yellow patch on the bottom where they’ve been sitting on the ground. When it’s a creamy yellow color, it’s ripe.

Thwack it with your thumb. It should sound deep. A dull sound means it’s not ready yet.

Look at the stem end. It should be brown, indicating the watermelon separated from the vine on its own.

Cut the watermelon into 1/2-inch thick triangles. Do not remove the rind when cutting, as you’ll need that to turn the watermelon with tongs and to serve. Combine the sugar, lime zest, red pepper flakes in  a small bowl and sprinkle both sides of the watermelon slices with the mixture, rubbing it in to create an even coating.

Grill about 2-3 minutes per side, until grill marks appear.

Serve with lime wedges and top with Greek yogurt or feta cheese as a side dish or with a scoop of vanilla ice cream as dessert.

Place the watermelon, lime juice and 1/4 cup of the Prosecco in a blender and blend until smooth. Strain through a fine mesh strainer into a bowl or pitcher. Divide the mixture into two glasses and top with the remaining Prosecco.

A chilled fruit skewer could be the perfect accompaniment to grilled chicken or pork. Thread a piece of watermelon, a piece of cantaloupe, a piece of Sensations melon and repeat, topping it with a fresh blueberry.

That’s a good snack for the kids, too.

But if you want something more adult, try this: Get a quart-size Mason jar or another tall container that the skewers will fit into. Put them fruit side down in the jar and fill the jar with the liquor of your choice. Vodka is always good, but try a little rum or even tequila. Let soak for 15-30 minutes before serving. And don’t dump the soaking liquor. Use it in a cocktail later.

By the way, if you want to spike your adults-only watermelon, the traditional method of cutting out a plug and pouring in vodka doesn’t distribute the booze very well. Instead, cut up or scoop out balls of watermelon, saving a half for serving. Once most of the flesh is cut up, pour vodka (or tequila) over all in the scraped-out half. Allow to sit for 30 minutes to an hour before serving.

For a main dish featuring watermelon, try this:

In a medium bowl, combine shrimp, 1/4 cup orange juice and 1/4 cup lime juice. Cover and refrigerate 1 to 2 hours, or until shrimp are pink and opaque. The citrus “cooks” the shrimp. Drain and discard juice.

Using a sharp knife, slice a watermelon down the middle, and cut a 2-inch thick slice. Using a spatula, spread an even layer of yogurt around the watermelon, leaving a bit of naked  watermelon near the rind.

Layer fruit on top of yogurt as you please. Add different kinds of fruit, if desired, such as mango, kiwi, banana and pineapple for a tropical pizza.

Drizzle with honey or maple syrup, if desired.