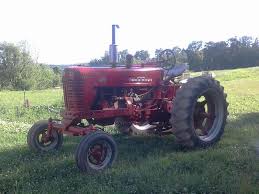 He always had me riding on his old red Farmall tractor with him as he puttered around the fields.

I woke up this morning thinking of when I was very little, and my dad calling me his “little buddy.”

He had me sit close beside him on the arm of the old family-room chair as he smoked his Tampa Nugget and watched Walter give the news.

He always had me riding on his old red Farmall tractor with him as he puttered around the fields, and talked of even putting a little seat beside of his on that old tractor so I wouldn’t have to cling for dear life.

He always had me with him.

It was me he took along with him to check out the old farmstead he ended up buying, and it was probably as much for me as himself that he wanted to buy this old place to get us out in the beautiful country instead of town — where I would grow up listening to crickets and chasing fireflies and splashing in a creek to cool off from air-conditioner-less summers, instead of dodging cars and hearing sirens late at night.

He even had me hang around with him as he worked at the Duke Power substation. I was allowed to go anywhere he went, even peering behind the switching wall where 100,000 volts were directed to the various lines in the county. Whenever he went out on a call to do something at the remote unmanned substations, I was with him in the company pickup truck. Imagine that in these days of enhanced corporate safety — a 3-year-old in a substation.

The point is, I was always right by his side, under his right elbow.

Time passed, and our regrettable family trait emerged that placed safe distance between each of us, protecting our fragile emotional islands. We did less together, we spoke less.

When I was older, we grew back together again. Though we never again put words to our affection, he saw that I again lingered near him and enjoyed being there. He saw that I found pleasure in doing things again with him, simple things — yard sales, of course, going to Daryll’s in Rockwell for a hamburger, sitting on the screen porch and listening to whippoorwills and tree frogs. He had given up his Tampa Nuggets, but still he clung to enjoying the night sounds in the country.

I started today thinking about him …

… and ended the day doing the same.

My own son, now a man” with a job, a car  payment that I’d hate to owe, and desires of his own, is lying in his bed directly behind the wall my seat is against. I hear him breathing  rhythmically as he prepares for his second day of work tomorrow.

I know that this time is fleeting. In a flash it will have passed, and it might be him sitting here thinking of me, long gone but very missed — and of the fireflies and tree frogs and closeness we shared.

I cannot honestly tell which is the greater — the joy of remembering him or the pain of missing him.

Letter: Some people are not on internet