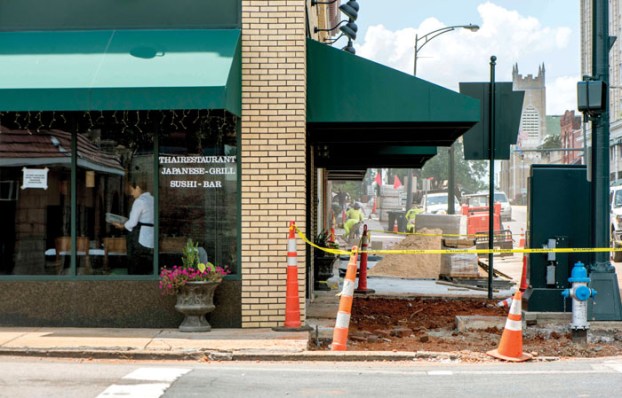 SALISBURY — The sidewalk project that has squeezed downtown Innes Street traffic and pedestrians since spring will loosen its grip soon.

Craig Powers, the city’s assistant public works director, said Monday that the current phase of the sidewalk replacement project should wrap up in the next few days.

With a lane of the street closed to give workers room to maneuver, traffic has been backing up for blocks during peak weekday hours as four lanes have been squeezed down to three or two.

Meanwhile, the sidewalks have been torn up in front of businesses, which made access a challenge for customers.

“The businesses and the public have been real accommodating,” Powers said. “I know it’s been an inconvenience.”

The project started on May 8 with the removal of trees in the 100 block of West Innes Street. Workers proceeded to remove the sidewalk material and pour new concrete, with a contractor coming in after them to lay pavers.

The old sidewalks had become damaged and uneven through the years

The trees were removed because the new sidewalk construction would have damaged their roots too much, Powers said at the time. An arborist had recommended the city replace the trees, which were deemed to be at the end of their life cycle.

City maintenance crews are doing much of the work. A $150,000 grant is covering materials and the contract work.

Powers said sidewalk benches that were removed during construction will be put back in place, and a few more may be added.

Bosque lacebark elms will replace the trees that were destroyed. Planting will take place in the fall, when the weather is cooler. The street may have to be blocked again for that work, Powers said, but for a much shorter period of time.