Yesterday: A 1953 photo of Salisbury Hardware and Furniture Co. 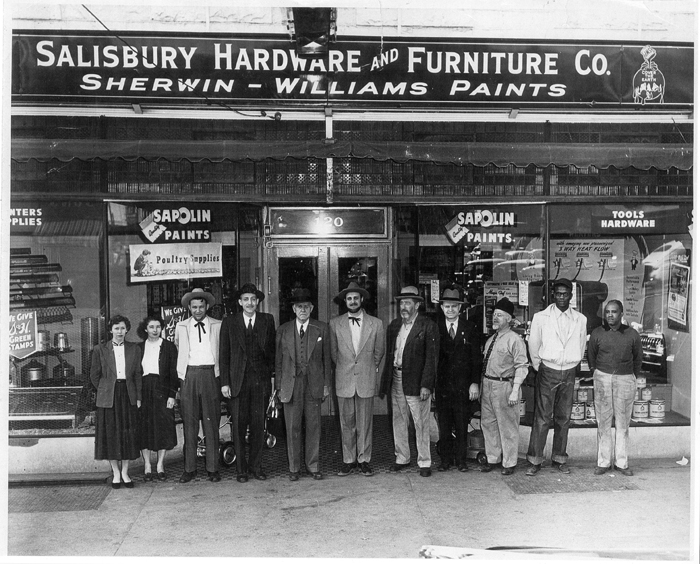 Melissa Eller provided this photograph to the Salisbury Post because William Vance Eller is pictured with other employees and principals of the Salisbury Hardware and Furniture Co. The store was located at 120 S. Main St., where today’s Sidewalk Deli is. It’s thought this picture was taken during Rowan County’s Bicentennial year in 1953, judging from the hats, ties and beards on the men. William Vance Eller is the man right of center with the beard and light-colored hat. Salisbury Hardware and Furniture was incorporated in 1897 by A.H. Boyden, Oren D. Davis, Theo Kluttz, the Rev. F.J. Murdoch, James H. Ramsay, Samuel H. Wiley, Paul M. Bernhardt and Caleb Bernhardt. Prior to 1915, the business had its hardware store at 108 S. Main St. and its furniture store at 110 S. Main St. The company actually went out of the furniture business in 1915 when it moved to 120 S. Main St. As was common in the past, firms that handled furniture often provided funeral services, too. Salisbury Hardware was in the funeral directing business until 1905. Salisbury Hardware closed in 1961. Company president, general manager and treasurer at the time was R.L. Bernhardt Jr., who should not be confused with the late Paul Bernhardt, who ran Bernhardt Hardware on North Main Street for many decades.

Yesterday: When W.W. Hahn’s plane was ‘shot down’ in…