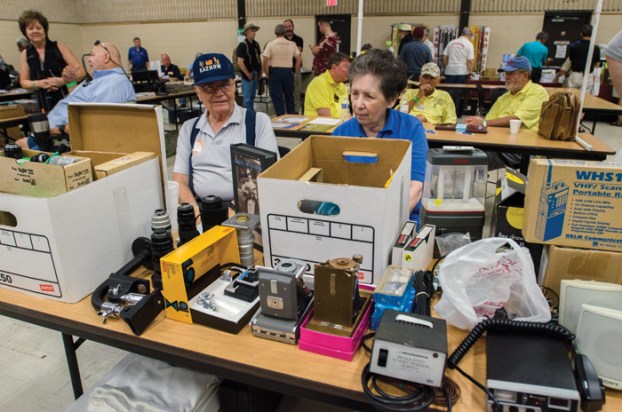 KRISTI CRAVEN/ SALISBURY POST Larry Zieglmeier, left, and his wife Linda have their table covered in stuff during the 32nd Annual Hamfest at the Civic Center in Salisbury on July 8, 2017.

Tuning in to ham radio

SALISBURY — People come from all over for the Rowan County Amateur Radio Society’s “Hamfest” — from Cabarrus County, Shelby and even as far as Alabama. But then, making connections is the nature of Ham radio.

“Amateur radio is one of the only hobbies I know where you can make friends all over the world, explore science and technology and be a service to your community all at the same time,” John Covington, past N.C. section manager for the American Radio Relay League, said.

Ham, or amateur radio, is a hobby that sprang up following World War I, Doug Spriggs, vice president for the Rowan Amateur Radio Society, said. Former radio corps members took advantage of a surplus of equipment after the war, and fashioned it into a hobby that allowed them to talk to people all over the world.

“Hams back then were innovators,” Spriggs said.

Their advances helped transform radio into what it is today, Spriggs said. Ham radio can even be used digitally in this day and age.

But its most important feature is helping connect people. Ham radio operators — or “hams” — must pass a test to receive a license and a call sign. While hams in the U.S. are subject to FCC oversight, after that the airwaves are theirs to explore.

And you’d be surprised at all the people who are closet ham radio operators. Wayne Ashworth, of Salisbury, said that there were several famous hams — including King Felipe VI of Spain.

Once, Ashworth said, he spoke to King Abdullah II bin Al-Hussein of Jordan over ham radio.

“It’s very strange to talk to someone and say, ‘Hello, your majesty.’ … He said, ‘Just call me Hussein.’ It’s a first name basis even if you’re royalty,” Ashworth said.

“And I’ve been hooked ever since,” he said.

But his interest in ham radio started long before that. He recalled growing up listening to shortwave radio.
“I’d hear all these strange voices and wonder who they were,” he said.

That interest eventually led him to a career in communications. He worked for WSTP in Salisbury and hopped from radio to print journalism to television.

A lot of hams have worked in communications, technology or are interested in the topics, Spriggs said.

But ham is more than just a hobby — it can be a community service. When disaster strikes and communications systems go down, a ham radio can still get through.

A ham radio signal can even be patched into a phone line and used to make a phone call. Before cell phones, it was possible to make calls from a vehicle that had a ham radio set up.

“No one else could do it back then except hams,” he said.

Part of Hamfest is local radio operators meeting with those from other counties in order to come up with disaster response plans.

“Sometimes face to face is easier than over the air,” Covington said.

Should disaster strike, hams will be ready to offer their services to the community.

But Saturday, they were mostly there to have some fun.

By Rebecca Rider rebecca.rider@salisburypost.com SALISBURY — It’s mid-Saturday morning when the game gets going. The pitcher stands at the ready,... read more