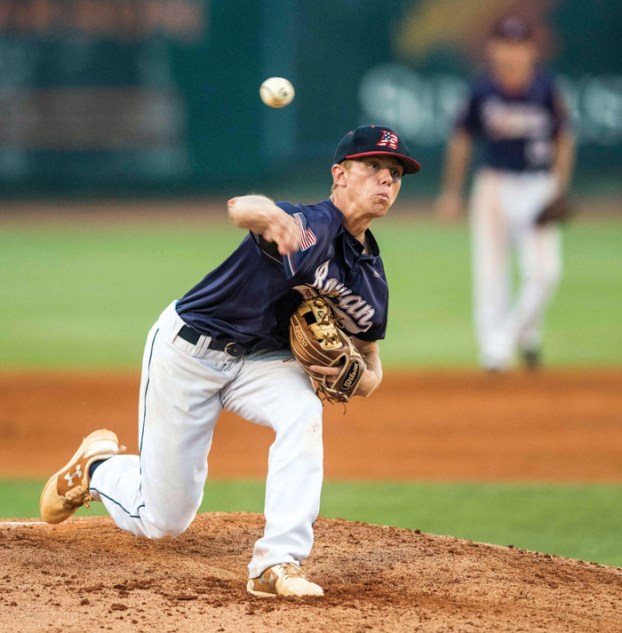 JON C. LAKEY / SALISBURY POST Rowan County’s Trevor Atwood (15) turns second and makes a dash to third base. Atwood was called out on the play at third. Rowan County American Legion takes the lead in the opening best 3 of 5 series with the HITOMS with a score of 13-0 at Newman Park. Monday, July 10, 2017, in Salisbury, N.C.

SALISBURY — Rowan County’s American Legion baseball team didn’t invent timely hitting, but it might as well file for a copyright.

Post 342 got off to a loud start in Monday’s Area III semifinal series against High Point at Newman Park — collecting 15 hits and smashing a couple of sky-scraping homers, including Brandon Walton’s game-ending grand slam in the eighth inning — to spark a 13-0 Game 1 victory.

“It definitely sets a tone for the series,” infielder Chandler Blackwelder said after Rowan (28-1)  earned its 11th mercy-rule triumph. “It’s a confidence-builder and gives us a cushion, but we cannot lay down.”

The show must go on for Rowan, which carries a 10-game winning streak into Game 2 tonight at Finch Field. Game 3 of the best-of-five set is scheduled Wednesday at home.

“Getting that first one is important,” said Rowan coach Jim Gantt. “Blackwelder got us started early and we tacked on some runs in the first three innings. But I thought the plays he made defensively were the difference in the ballgame. He shut down a couple of rallies.”

Rowan snuffed out High Point (13-15) threats with double plays in the second, third and seventh innings. Blackwelder, making his first start at shortstop this summer, initiated two of them.

“I played shortstop all season for East (Rowan),” he said. “I always feel comfortable out there.”

Blackwelder has played short, second base and center field for Post 342, but his best position may be the batter’s box. Losing pitcher Zack Lambeth found out as much on his fourth offering of the game, a meaty 3-0 fastball that Blackwelder jerked over the left-field wall.

“I had the green light,” he said with a post-game smile. “Even though the first three (pitches) were balls, I saw everything really well. Anything that was in my little square, my little circle, I was gonna take a hack at.”

“All it takes is one or two errors for a can to open up,” said Post 87 coach Rob Shore. “If we catch a pop fly we’re out of that first inning down one run. By the second inning we looked up and we had given away four runs. You can’t do that against these guys.”

By the third inning, it was 9-0, courtesy of Chandler Lippard’s run-scoring triple off the centerfield wall and RBI-singles by Tanner File, Brycen Holshouser and Henderson Lentz, who legged out an infield hit one pitch after fouling a ball off his right foot.

“We’re just good hitters,” Walton said after knocking in five runs. “And (Lambeth) threw strikes. Scoring that much, that early, got us going for the rest of the game.”

Rowan’s John Owen started on the mound but was denied the victory because he failed to complete five innings. Gantt strategically removed the right-hander after 4 2/3 innings and 74 pitches.

“If he had thrown 75, he’d be done for the series,” Gantt explained. “It’s one of those bad baseball rules that force you to do things differently. By getting him out of there, he can come back in Game 5 and throw 120 if we need him to.”

“When the kid (left-fielder Lentz) dove for it, I think he blocked the ball from me and the umpire,” Shore said. “I didn’t have a good view, but he said it landed on the back side of the line.”

Gantt challenged to no avail. “(Bost) said it was fair,” he said. “He thinks he got it right.”

Nothing came of the play because Owen induced subsequent batter Jacob Kohns to lift an inning-ending fly to right field. The middle innings were quiet — Rowan managed only two baserunners over the next four, but firemen Griffin Myers, Noah Gonzalez and Joe Harrison provided air-tight relief work through the eighth inning.

Then it got loud again. Facing High Point right-hander Spiva in the last of the eighth, Blackwelder and Lee Poteat sandwiched one-out infield hits around a walk to Lentz. Walton sent the lively crowd home early when he turned a 1-0 fastball into a Titleist, belting a 375-foot grand slam over the center-field wall.

“It’s my first walk-off hit,” he exclaimed after clocking Rowan’s fifth extra-base hit. “Fastball, right down the middle. I was aiming for a sacrifice fly, not trying to do too much with it. It just carried out of here.”

NOTES: Gantt has right-hander Olen Stamper penciled in to start tonight’s game. High Point, now 5-2 in the playoffs, will counter with Charlie Edwards. … Blackwelder finished 3-for-4 and scored twice. Holshouser, File, Walton, Lentz and Trevor Atwood each had two hits.