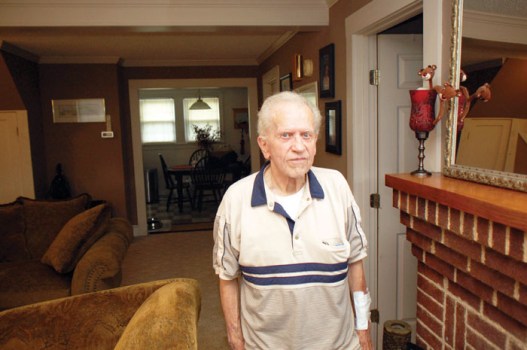 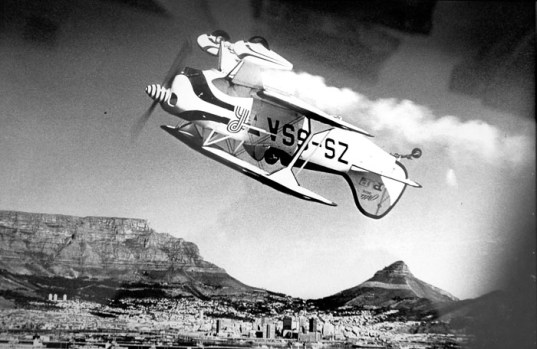 Lindsay Hess flies upside down in South Africa during an air show with smoke trailing behind. Submitted photo 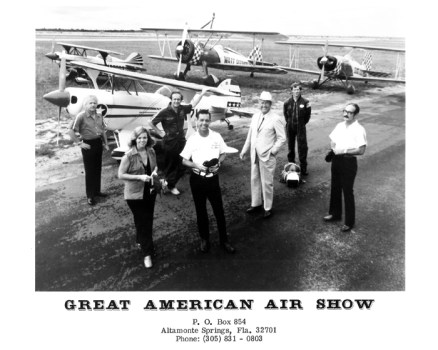 Lindsay Hess, far left, was a stunt pilot in the Great American Air Show. His friend and fellow pilot the late Jim Holland is far right. Near the center with the cowboy hat is the late Kirby Grant, who starred in the television show "Sky King" and was the air show's emcee. 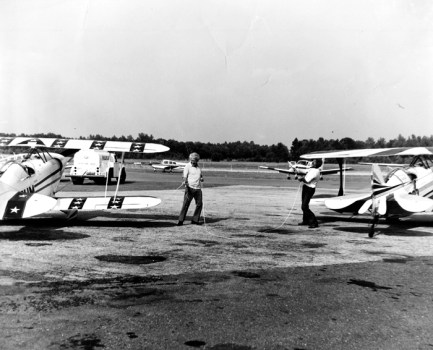 Lindsay Hess, left, and Jim Holland were the first aerobatics team to tie their planes together. 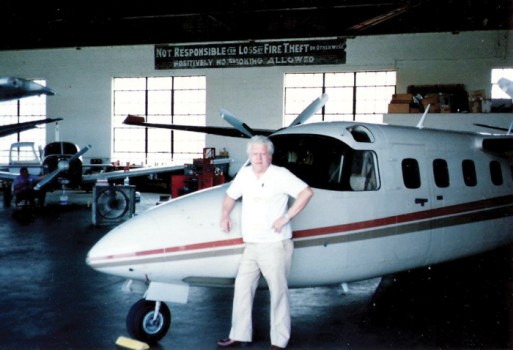 Lindsay Hess with the plane he flew for Food Lion. 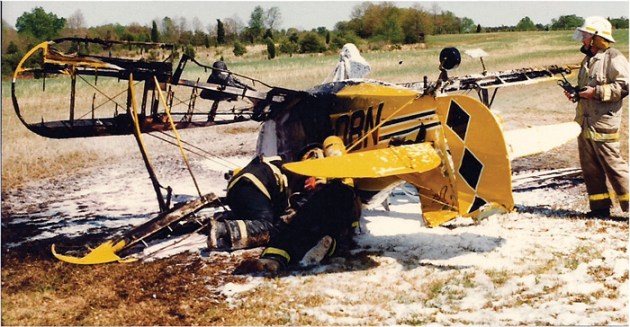 Lindsay Hess' stunt plane after his upside down crash landing in 1996. 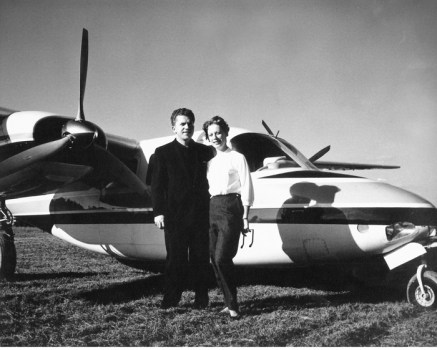 Lindsay and Carolyn Hess next to the plane Lindsay flew for Curtis Turner.

FAITH — It’s difficult for Lindsay Hess to say how long it has been since he flew an airplane solo. At 85, he wouldn’t trust his health and instincts anyway, so it’s a moot point.

“Yeah, when I left that, I really gave it up,” Hess says matter-of-factly from a cushy chair in his living room.

Hess cut way back on flying after something went wrong during an air show near Eden in 1996. Hess was doing one of his signature tricks — flying upside down about 15 feet above the runway and cutting a ribbon with his propeller.

That day, his sons Jaye and Gary were holding the poles that stretched the ribbon between them. After their dad zoomed through and cut the ribbon with his Pitts S-2 stunt plane, it suddenly dropped to the ground.

The canopy over Hess’ cockpit popped off as the plane skidded upside down. Hess guessed his head was about 3 inches from the runway surface as rock and gravel were being thrown violently at his face before the plane careened off into the grass and stopped.

Hess pushed out of his safety harness and scooted from under the plane, which was on fire. He was OK, but to this day he laments it was “the only scratch I’ve ever put on an airplane.”

Hess almost apologizes for the quiet life he leads today. “Quiet” has never been a word used to describe Hess or the interests he pursued.

As good as he was as an aerobatics pilot, his plane screaming into suicide dives and skin-stretching loops, he was equally as talented with his voice — a tenor who once dreamed of being an opera singer.

Many people also will remember Hess as the fixed-base operator of the Rowan County Airport from 1980-1996. It was a period sometimes marked by his stormy relationships with pilots, plane owners and county officials.

Hess’ talent for flying led to his being a pilot for Food Lion during the company’s hyper-growth days when executives were constantly on the go, leaving Salisbury to check on stores and warehouses.

Hess also flew for flamboyant race car driver and entrepreneur Curtis Turner. Some of their business trips together are documented in the 1966 book “Timber on the Moon: the Curtis Turner Story.”

But it was the stunt flying Hess enjoyed the most. For many years, he teamed with Jim Holland, and later, John Stone for the precision flying air shows at Carowinds.

Hess and Holland were the first fliers to perform stunts in the air with their planes tied together — by a 25-foot piece of rope.

Hess also toured the country for a time with the Great American Air Show. Kirby Grant, who had starred in the “Sky King” television show of the 1950s, was a friend and emcee for those aerobatic daredevils.

Gary Hess says it should not be forgotten that his dad’s air show performed for 13 years during the Fourth of July activities in Faith. Firestone was the sponsor.

“Everything he did at Carowinds, he did in Faith,'” Gary says. “My dad could do some things with an airplane.”

Gary thinks the last time Lindsay Hess was up in an airplane was two years ago on a Father’s Day. Not long before that, Hess lost his footing one day and fell backwards over a coffee table. He broke four ribs and collapsed a lung, leading to almost a week’s stay in a Winston-Salem hospital.

After Hess returned home, he suffered a heart attack. So things haven’t been easy.

The latest blow was the loss of wife Carolyn in June. Though the couple had been living apart for decades, Hess had visited Carolyn at her Brown Street home almost daily, especially in the years after her stroke in 2002.

The visits were part of his routine. Now they are over, too. The couple had discovered long ago they couldn’t live together but never too far apart.

Lindsay Hess grew up in Faith. His father was a stone cutter; his mother, a homemaker. They had four boys and a girl. The kids attended Faith Elementary School, then Granite Quarry High School.

The family built a house on Faith Road in 1944 when Lindsay was 13, and that’s where he lives today with Jaye and Gary.

Teachers and family first recognized Lindsay’s singing talents in elementary school when he was in “Hansel and Gretel.” He was singing at weddings as a teenager, in the high school glee club and with church choirs and community choruses.

A local pastor once told Lindsay Hess he decided to enter the ministry after hearing Lindsay sing “The Lord’s Prayer” at his sister Marcia Hess’ funeral.

The last time Lindsay Hess performed in public was more than 20 years ago when he sang the same song at Gary’s wedding.

Lindsay began taking voice classes at Catawba College and fascinated by opera, he listened to 12-inch records of Caruso and other great tenors singing the classics. Around this time, he decided to enlist in the Air Force.

Tensions were running high in Korea, and “I didn’t want to get drafted,” he says.

It proved to be a smart move. After training in San Antonio, Texas, and Biloxi, Miss., Hess ended up being assigned to Air Force installations in New York State, first in Schenectady, then in Saratoga.

He was trained as a radar technician, not in flying, and he had enough spare time to enroll as a day student at Skidmore College, a mostly women’s college near his base. “That was pretty good,” he says, “500 girls and eight or nine guys.”

Hess says he was given parts in musicals and light operas. He also worked and sang with the United Service Organization, and he dropped into nightclubs to sing when allowed.

His favorite place, near the Saratoga racetrack, was King’s Bar, where a woman played the piano. At their first encounter, Hess confidently told her he could sing anything she could play, and she suggested “Martha,” a popular song at the time.

“Italian or English?” he asked.

Hess sang the song beautifully. “She was my biggest buddy from then on,” he says.

Hess never left the States while in the Air Force, and he never piloted a plane.

“That was about to change,” he laughs.

Hess returned home to Faith with every intention of eventually leaving for New York City and trying to establish himself as a singer — opera or otherwise.

He held the cards of two agents who had heard him sing in Saratoga, and Hess came up with the idea of obtaining a flying license so he could fly to and from New York as his singing engagements might dictate.

Ralph Shipton and George Brown taught Hess how to fly in a plane owned by Clay Swaim, who managed Rowan County Airport. Hess just seemed to have a natural feel for flying, and he loved it.

The singing career was put on hold. He earned an instructor’s rating, and before long he was piloting and teaching students for Southeast Aeromotive in Charlotte.

He met Carolyn, an Eastern Airlines stewardess, during those years. “She was in uniform the first time I saw her,” Hess says. They married in 1960.

It was also in his earlier days of flying that Hess piloted the twin-engine Piper of Curtis Turner’s, and he can’t help but speak fondly of Turner to this day.

From 1963-1974, Hess was the fixed-base operator at the airport in Rock Hill, S.C., but “it was getting a little tiring — what I was doing,” Hess says. “I was tired of just plain old flying an airplane.”

In 1973, he read a magazine with a cover story on the Pitts two-seater stunt plane, and he couldn’t contain his enthusiasm. He called Curtis Pitts, the builder, and asked who could teach him how to fly this new single-engine bi-plane.

Pitts directed him to Holland, who flew to Rock Hill in his Pitts and gave Hess the instruction he needed. Hess then bought his own Pitts for $31,000.

The bi-plane had an inverted fuel and oil system, allowing pilots to fly upside down. It was tiny — a 21-foot wingspan and a 19-foot fuselage — but he had a powerful 200-horsepower engine.

Hess and Holland provided the aerobatics at Carowinds from 1975 to 1977, then it was Hess and Stone through 1980, Hess’ first full year as the manager at the Rowan County Airport.

It was Hess’ idea to tie his plane to Holland’s for some of the stunts.

“First ones ever,” Hess says proudly. “We had to push the envelope to make it look good.”

Hess and Holland also did shows as far north as New England.

When he wasn’t flying at Carowinds or elsewhere, Hess was with the Great American Air Show, which went as far west as San Diego. One of his fondest experiences as a stunt pilot came when he joined Bob and Cassie Yde and their Great American Air Circus for that 1979 tour of South Africa, Hess says.

‘That was the highlight of it all right there,” he says.

Lindsay taught Gary and Jaye to fly, even gave them some instruction on loops and spins, though they haven’t really stayed with it.

Gary Hess remembers his mother and father separated when he was in second grade, but he doesn’t think they ever divorced. As he remembers it, his mom and dad were always together for holidays and their kids’ birthdays.

Gary Hess keeps all of his father’s show programs, newspaper clippings and publicity photos from the stunt show days at his paint and tattoo studio in downtown Faith.

Because his parents were living apart, Gary says he would see his dad every other weekend, and they spent a lot of time at the Rowan County Airport. Hess had even arranged a place where they could cook, watch television and sleep overnight.

“We grew up out there,” Gary says. “We got to do a lot of cool things growing up.”

It was not unusual for Hess to fly his children down to the beach and back over a weekend.

Hess also would pilot then Food Lion Vice President Jerry Helms’ private plane, and Gary remembers his dad taking him along for a weekend on Hilton Head Island.

To this day, after people learn that Lindsay is Gary’s dad, they often tell him that his father sang at their wedding.

“A lot of people know him because of his voice,” Gary says.

Gary Hess says his father belonged to a group of retired pilots, military and otherwise, who called themselves ‘The Quiet Birds.”

It was almost a secretive society of guys in that you could only join if someone in the group recommended you. There also was an initiation process.

The group met now and then at a Charlotte steakhouse and would just sit around and shoot the bull, Gary Hess says, adding, “He hasn’t been in a couple of years.”

“Very little,” he says from that cushy chair in the living room.

Does he miss singing the way he once did?

“More than I do flying,” he says. “I kind of hate that I quit that altogether.”